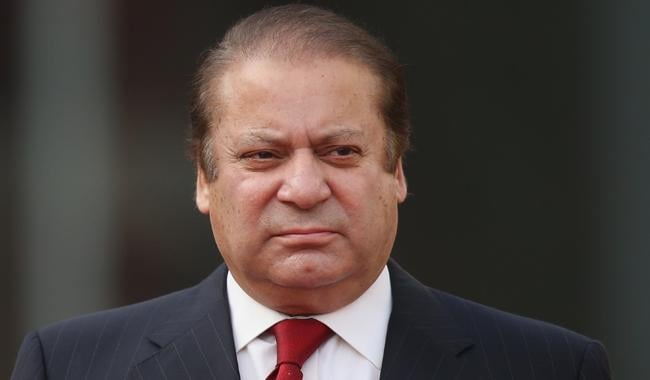 ISLAMABAD: Supreme Court on Friday disqualified Prime Minister Nawaz Sharif from public office over long-running corruption allegations, a decision that ousted him from the premiership for the third time.

The ruling saw political uncertainty take hold in Pakistan once again, with Cabinet dissolved and the country left without a sitting prime minister.

As the verdict was announced in Islamabad, hundreds of opposition supporters in the capital and in northwestern Peshawar rushed into the street handing out sweets, beating drums, and chanting "Go Nawaz Go" in celebration.

But in Lahore, capital of Sharif´s power base of Punjab province, sporadic protests broke out, with his supporters burning tyres, blocking streets and chanting "We don´t accept this decision".

General elections are scheduled for next year, but Sharif now falls short of becoming the first premier to complete a full five-year term.

The allegations against the prime minister spiralled from the Panama Papers leak last year, which sparked a media frenzy over the lavish lifestyles and luxury London property portfolio of the Sharif dynasty.

Those claims prompted an investigation which said there was a "significant disparity" between the family´s income and lifestyle, and unearthed fresh claims over Sharif´s links to companies based in the United Arab Emirates.

The court cited the UAE allegations in its ruling Friday, declaring they indicated Sharif was "not honest" as it brought his tenure to an unceremonious end.

"He is disqualified as a member of the parliament so he has ceased to be holding the office of Prime Minister," Justice Ejaz Afzal Khan told the packed courtroom in Islamabad.

Sharif´s ruling PML-N party confirmed he had stepped down with "serious reservations", a move which automatically dissolves Cabinet.

The PML-N currently has no clear successor in place. Party leaders, including Sharif, were pictured meeting in Islamabad after the verdict Friday, though no result was announced.

The Supreme Court called on President Mamnoon Hussain, who swears in the prime minister, to take the "necessary steps under the Constitution to ensure the continuation of the democratic system".

"I want to tell the nation that it is a huge victory of yours," cricketer-turned-politician Imran Khan, who spearheaded the push against Sharif along with his Pakistan Tehreek-i-Insaf party, told reporters at his home outside Islamabad Friday.

"I am seeing the destination of a new Pakistan in front of me," he said, announcing a rally to be held on Sunday.

"The situation is quite fluid and it is difficult to say at the moment whether there will be snap elections or an interim government will be formed," he told AFP, though he added chances were "bright" that Sharif´s PML-N would form a new government.

The Sharifs and their allies have consistently and noisily rejected the graft claims against them.

"Not a single penny of corruption has been proved in this decision against Nawaz Sharif and the people of Pakistan also know it," information minister Maryam Aurangzeb told reporters after the decision.

"Inshallah (God willing) Nawaz Sharif will also be elected again for a fourth time," Aurangzeb added. She was echoed by other defiant PML-N leaders.

The court has asked the national anti-corruption bureau to launch a further probe into Sharif and his children, which could see criminal charges brought against them.

The controversy erupted last year with the publication of 11.5 million secret documents from Panamanian law firm Mossack Fonseca documenting the offshore dealings of many of the world´s rich and powerful.

Three of Sharif´s four children -- including his daughter Maryam Nawaz, his presumptive political heir -- were implicated in the papers.

The case examined the legitimacy of funds used by the Sharif family to purchase several high-end London properties via offshore companies.

In April the Supreme Court declared there was "insufficient evidence" to oust Sharif in a written ruling which opened with a quote from ´The Godfather´, and ordered a judicial body to carry out further investigation.

The team of civilian and military investigators released their findings earlier this month, sparking an uproar.

Attention focused on the investigation´s conclusion that documents regarding Sharif´s daughter and the London properties were "falsified" -- dated 2006, but typed in Microsoft´s Calibri font, which was not released for commercial use until 2007.

But it was the investigation´s revelation of Sharif´s previously undisclosed links to companies in the UAE that spurred Friday´s court ruling.

Sharif has been ousted by corruption allegations once before, when he was sacked by the country´s then-president during his first term in 1993. He was removed from office in his second term by a military coup in 1999.

Is Bakhtawar Bhutto-Zardari getting married this month?