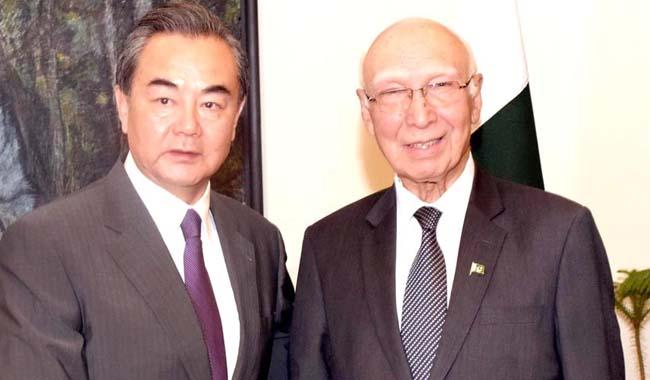 ISLAMABAD: Advisor to Prime Minister on Foreign Affairs Sartaj Aziz Sunday reiterated that Pakistan wanted peaceful relations with all its neighbours including India.

Addressing a joint press conference with Chinese Foreign Minister Wang Yi, the Advisor said Pakistan has consistently emphasized that peace and stability in Afghanistan was in its interest and a stable Afghanistan would help promote shared agenda of economic development and regional connectivity.

Towards this end, Pakistan, Afghanistan and China agreed to strengthen mutual cooperation and coordination in dealing with the common challenges to peace and security, he added.

He also informed the Chinese foreign minister about Pakistan's efforts to strengthen cooperation with the Afghan government in counter-terrorism, border management and voluntary and sustainable return of Afghan refugees.

Sartaj also emphasized on the need for the two countries to pursue their abiding commitment to not let their respective soils be used against each other.

"We agreed on the need for strategic balance in South Asia," he told media about his meeting with Chinese FM.

The Advisor said as a result of in-depth discussions with Foreign Minister Wang Yi in Kabul and Islamabad, Pakistan, Afghanistan and China have agreed to establish following two important mechanisms:

II: A bilateral crisis management mechanism between Afghanistan and Pakistan that would enable the two sides to maintain timely and effective communications in case of any emergencies, including terrorist attacks, with a view to seeking proper solution through dialogue and consultation.

He said that they had also agreed that the experience of past 15 years had clearly shown that the Afghan conflict could not be resolved only through military means.

In this context, Afghanistan, Pakistan and China agreed on the need for reviving the QCG process in order to create a conducive environment for talks between the Afghan government and the Taliban, he said.

The Advisor said Pakistan's relations with China were the cornerstone of its foreign policy.

About their meeting, Sartaj said they identified areas for further consolidation of the `all weather' relationship between Pakistan and the People's Republic of China.

Both countries agreed that terrorism was a common challenge.

It was also a challenge to global peace and stability.

"We recorded our satisfaction on the implementation of early harvest projects of CPEC, which will not only help resolve the energy crisis in Pakistan, but also accelerate economic growth providing wide-ranging benefits to the people of Pakistan," he added.

He said the next phase of CPEC, as part of the wider One Belt One Road (OBOR) initiative, would not be confined to physical connectivity only but would also promote connectivity of ideas, cultures and people.

In this regard, he said Pakistan was grateful to China for its constructive proposals for promoting peace and harmony in the region.