Operation to continue with ‘fullest might of the state’ 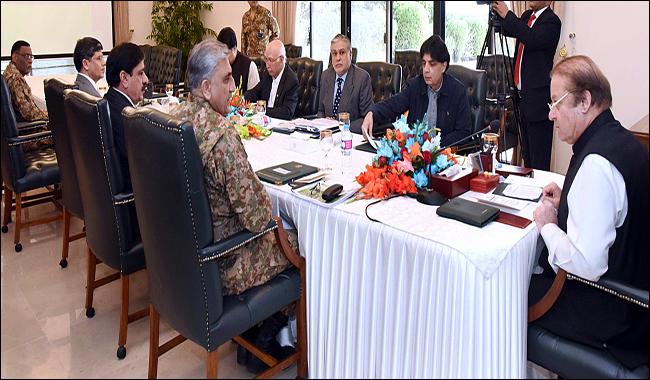 ISLAMABAD: Prime Minister Nawaz Sharif on Friday chaired a high-level security meeting at the PM House to review Operation Raddul Fasaad and expressed resolve to continue the offensive until all targets are achieved.

The meeting, which was attended by senior civil and military officials, agreed to continue the operation against terrorism in all its forms and manifestations with the “fullest might of the State”.

The prime minister said Pakistan had given immense sacrifices in its own war against terrorism.

“We are fully determined to remain steadfast in our commitment and duty to undertake all steps for eliminating terrorists without any discrimination of geographic region, colour or sect,” he stressed.

The prime minister said the across-the-board consensus among all stake-holders and the overwhelming sentiments of people against terrorism, guarantee the wining of this war.

The participants of the meeting underlined that the operation reflected the unilateral national resolve and commitment of complete obliteration of terrorism from the entire country.

They reiterated that national unity and support were indispensable for successful implementation of the anti-terror strategy.