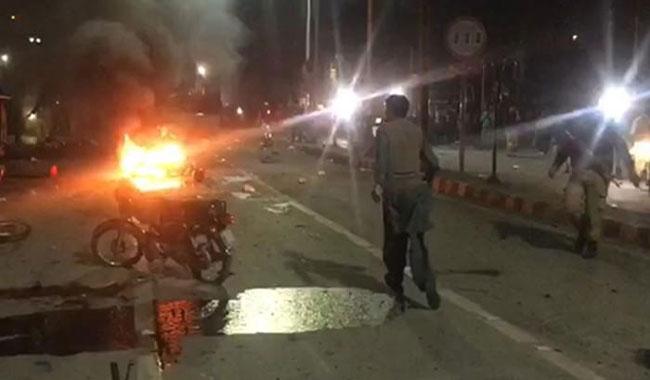 LAHORE: At least 13 people, including two senior Police officials, were killed and several injured in a strong bomb blast at the Chairing Cross, Mall Road near Punjab Assembly Building here on Monday.

Rana Sanaullah, the provincial law minister, confirmed that it was a suicide blast, occurred during a protest, which was being staged by drug dealers against the Drug Act introduced by the Punjab Government.

Sources said that some 400 people were protesting when the explosion took place.

A heavy contingent of police reached the site of the incident. Media representatives were also present at the site of protest when the explosion took place. The protesters were dispersed following the blast.

The explosion was so powerful that it shattered windows of DSNG vans and police mobiles parked near the affected area.

The Pakistani Taliban faction Jamaat-ul-Ahrar swiftly claimed responsibility for the blast, which came three days after it announced it would carry out a series of attacks on government installations around the country.

A spokesman for the group warned in an statement that Monday´s blast was "just the start".

Lahore, the country´s cultural capital, suffered one of Pakistan´s deadliest attacks during 2016, a Jamaat-ul-Ahrar suicide bomb in a park over Easter that killed more than 70 -- including many children.

But such incidents have been rare in the teeming city in recent years, with security across Pakistan improving dramatically in 2015 and 2016 after the military launched a crackdown on extremism backed by a government-led National Action Plan.

Social media users were quick to suggest the blast was meant to derail plans to hold the highly-anticipated final of the Pakistan Super League in Lahore.

The second year of the Twenty20 tournament is currently being held in the United Arab Emirates out of security fears, but after a military crackdown on extremism officials were confident enough to plan for the final to take place in the cricket-mad city.

Day not far when Kashmir will be free from clutches of Indian occupation, says PM Imran

No drop of blood shall be 'forgotten or forgiven', says DG ISPR on Kashmir Martyrs' Day