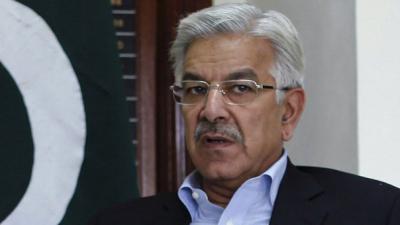 ISLAMABAD: In a startling disclosure on Monday, Minister for Defence Khawaja Asif said some 'separatist leaders’ from Balochistan travel on Indian passports.

He said on the heels of the launch of Operation Zarb-e-Azb, India suspended contacts with Pakistan on the pretext of meetings with Kashmiri leaders.

“India also escalated pressure at the working boundary and LoC (Line of Control),” he added.

The Defence Minister said India had been trying to increase Pakistan’s engagement at the eastern borders in a bid to directly or indirectly lessen the pressure against the Taliban militants.

He said despite the visit of Pakistan Prime Minister to New Delhi, Indian aggression at Pakistan's eastern border was incomprehensible.

He said there appears to be Indian hand behind the acts of terrorism in Pakistan.

“India is creating propaganda against Pakistan under a well-conceived strategy,” he said, adding, the tragic incidents of Samjhota Express and the boat tragedy prove this conspiracy.

Khawaja Asif said Pakistan can respond to India in the same coin and ‘we can also take up the issue of the recent incidents of Indian aggression at an international forum’.

He said Pakistan is also aware of the Indian attempts aimed at maligning Islamabad internationally.