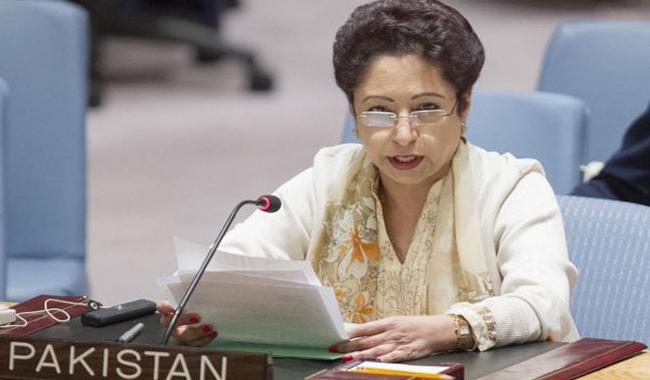 NEW YORK: A top Pakistani diplomat has called on the world community to ensure that international agreements on waterways such as the 1960 World Bank brokered Indus Waters Treaty between India and Pakistan were not undermined through unilateral or coercive measures.

“Access to water is a fundamental right that must be protected at all times,” Ambassador Maleeha Lodhi, Pakistan`s permanent representative to the UN told the Security Council while warning against any use of water as an instrument of coercion and war.

Speaking in a debate on Water Peace and Security, Ambassador Lodhi noted that Secretary General Ban Ki moon had in his opening address also cited the 56-year old treaty which regulates the flow of six rivers between India and Pakistan as an example of positive cooperation.

She said we will respect and protect our existing understandings and build where they are yet to be reached.

Her remarks were obviously aimed at India which threatened to block water supplies to Pakistan after militants attacked in Uri sector of the Indian occupied Kashmir in September.

While the Indo-Pak treaty was a model of what can be achieved through bilateral agreements, the Pakistani envoy said it was equally a good case study of what could go wrong if such pacts were not honoured or threatened by one of the state parties to be abrogated altogether.

The international community must remain vigilant to any sign of unwillingness to maintain cooperation and be willing act to avert any conflict.

As regards member states ability to cooperate in water sharing, Ambassador Lodhi said there were several international institutions capable of address the technical or financial needs for developing and sustaining cooperation.

However, she said the only international body that can enhance member states political ability to cooperate was the Security Council.

“It is the Security Council’s responsibility to resolve international conflicts and disputes especially longstanding prolonged conflicts in particular in Asia and Africa,” the Pakistani envoy said.

Unburdened by conflicts of the past new challenges can then be addressed cooperatively and comprehensively.

Reaffirming Pakistan`s commitment to maintaining cooperation in the face of water scarcity, Ambassador Lodhi said Pakistan will not allow this challenge to put international peace and security at risk.

According to a concept note issued by Senegal which hold the 15-member Council’s presidency for November that in the same way that disputes over oil and land have led to conflicts now and in the past disputes over water could lead to confrontations in the future if nothing is done.

The debate is an opportunity to showcase successful experiences and mechanisms for cooperation and mediation with a view to strengthening one of the UN s weaknesses conflict prevention.

At the outset of her speech, Lodhi said Asian and African States in particular sub Saharan States were all witnessing a growth in population vulnerability to climate change and an ever increasing hunger for development.