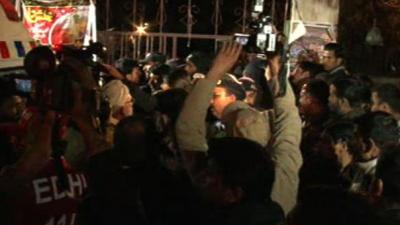 ISLAMABAD: At least three people were killed and two others injured Wednesday in a gun-and-suicide-bomb attack at an imambargah in Islamabad, police and hospital officials said.

The attack took place during Maghrib prayers at the Imambargah Qasr-e-Sakina in New Shakrial area, which connects Rawalpindi to Islamabad.

A spokesperson for the government-run Pakistan Institute of Medical Sciences (PIMS) hospital in Islamabad confirmed that two of the injured succumbed to their wounds on their way to the hospital.

Another injured later lost his life at the hospital, raising the death toll to three.

"One of the injured expired in the operation theatre and the death toll is three now," Dr Ayesha Ishani, spokesperson for PIMS hospital told reporters.

Ishani said two other injured people were undergoing medical treatment, one of whom was in critical condition in the operation theatre while the other was stable.

According to police, the suicide bomber tried to blow himself up when security guards opened fire on the attacker, wounding him.

"The suicide bomber had opened fire before trying to enter the mosque which caused the causalities," said a spokesperson for the Islamabad police.


A security guard who witnessed the attack told Geo News that he heard gunfire outside and immediately reacted by bolting the inner gate of the imambargah, giving worshipers enough time to lock themselves inside the main hall.

The attacker came to the gate and shot a guard and a worshiper outside before he detonated his explosives, said the guard Mohammad Yousuf.

Police said the attacker was unable to properly detonate his explosive vest, which was later defused by the bomb disposal squad.

This is the third attack at an imambargah in Pakistan in the last three weeks.

Last week, Taliban militants carried out a suicide attack at the Imamia Masjid Imambargah in Peshawar, killing 20 people and injuring 50 others.

On January 30, terrorists attacked the Imambargah Maula Karballa in Shikarpur, killing over 60 people.

Since June last year, the army has been waging a major campaign against strongholds of the Tehreek-e-Taliban Pakistan (TTP) and other militants in the North Waziristan tribal area, killing over 2,000 terrorists.

The military stepped up its fight against militants since Taliban gunmen massacred more than 150 people, most of them children, at the Army Public School in Peshawar on December 16.

Following the massacre, Prime Minister Nawaz Sharif ended a six-year moratorium on the death penalty and has since hung a number of convicted terrorists.