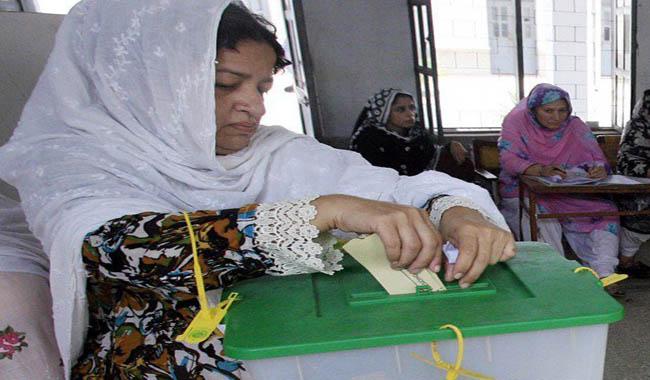 MUZAFFARABAD: Polling for the 10th general elections on 41 seats of Azad Jammu and Kashmir Legislative Assembly is in progress.

The polling will continue without any break till 5 PM, however voters present in the polling stations will be allowed to cast their vote even after expiry of the time.

AJK Election Commission has made necessary arrangements to conduct the elections in a free, fair and transparent manner.

Around four hundred twenty-three candidates are taking part in the election.

Over two point six million voters of twenty-nine constituencies of AJK and twelve reserved seats for refugees of Jammu Kashmir settled in Pakistan are exercising their right to franchise.

Special security arrangements have been made by deploying thirty six thousand personnel of Army, Rangers, Frontier Constabulary and Police to maintain law and order.

After a vigorous election campaign by the political parties that ended on Tuesday, tough competition is expected in the elections, especially from the mainstream political parties such as Pakistan Muslim League-Nawaz (PML-N), Tehreek-i-Insaf (PTI), and Pakistan People’s Party (PPP).

People will directly elect representatives on 41 general seats, for which 423 candidates are currently contesting.

People of AJK will directly elect 29 candidates, whereas, 12 representatives will be chosen by Kashmiris living in Pakistan.

In the polls, 26 political parties and Independent candidates are participating.

There are also eight Special Seats for the AJK Assembly, having five seats reserved for women, one for technocrat, one for Ulema-e-Mushaikh (religious scholar), and one for overseas Pakistanis.

A total of 274,586 people will use their right to vote in the AJK general elections.

The number of Kashmiri voters residing in Pakistan is 438,884. A total of 5,427 polling stations have been set up for the voters, out of which 1500 have been declared as sensitive.

Polling also started for the two AJKLA seats in Sindh, LA-30 and the LA-36.

Political parties mainly focus on Karachi because most voters of the two constituencies live in the city. There are 22 candidates contesting for the two seats. At least 49 polling stations have been set up in different parts of the city, where over 13,000 voters will cast their votes.

Chief Secretary Azad Kashmir Jalal Sikandar Sultan Raja Thursday said that adequate security arrangements had been made for smooth and peaceful conduct of the polling.

Peaceful conduct of the polling will be ensured at every cost he said while talking to media after reviewing security arrangements made at polling stations here.

He said a network of different security agencies had been established to provide secure environment to voters so that they could cast their votes without any pressure and fear.

He said more than 22 000 Army troops had been deployed at polling stations in addition to Police and semi armed forces to avert any disturbance in the polling process.