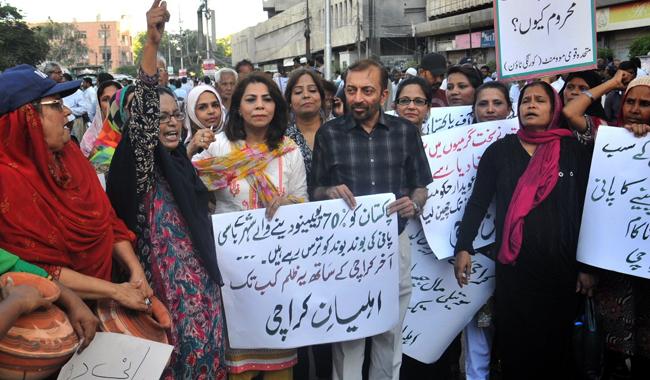 KARACHI: Leaders of the Muttahida Quami Movement (MQM) including Farooq Sattar staged a protest at the Karachi Press Club against shortage of water in the metropolis.

A large number of MQM supporters along with Sattar marched to the Karachi Press Club amid high deployment of police officials and road blocks by the Chief Minister House.

"I have informed the administration that we will carry out our protest demonstration come whatever may," he said. "We will cross all hurdles and obstacles placed in our path to reach Chief Minister House," he added.

Other leaders also made inflammatory speeches during the protest, as one leader said "If water is not given to Karachi, we will change the geography of the province."

Meanwhile, a government committee reached Karachi Press Club for negotiations with the demonstrators. The government's committee comprised of representatives from the Chief Minister House and the Commissioner House.

Earlier, all streets leading up to the Chief Minister's house were closed and traffic was directed from P.I.D.C to the Karachi Press Club.