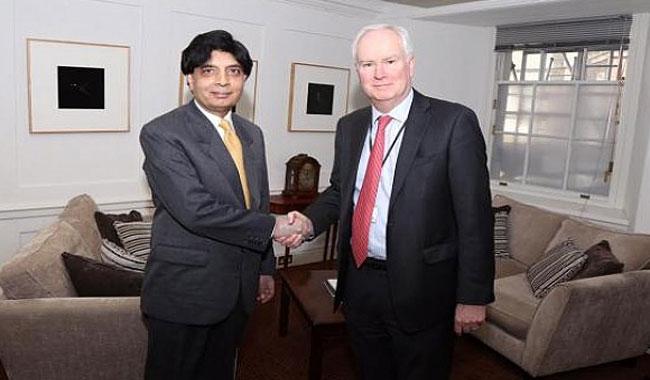 LONDON: Pakistan and UK reaffirmed their commitment for greater cooperation and interaction at all levels to further strengthen their existing partnership for dealing with issues of mutual concern, achieving shared objectives and ensuring regional peace and security.

This was agreed upon during the meeting of Pakistan’s Interior Minister Ch Nisar Ali Khan with the British National Security Advisor Sir Mark Lyall Grant here at the 10th Downing Street today.

The Interior Minister appreciated the UK Government's understanding of the problems being faced by Pakistan and their consistent commitment and support to the country in addressing these issues.

Talking to British National Security Advisor, the Interior Minister said that due to its historical linkages, UK is in a position to have better understanding of regional dynamics and peculiar socio- security environment.

Despite this advantage, the existing Pak-UK cooperation is far below the actual potential and there is a need to make greater efforts for tapping this potential for the mutual benefit of the two countries.

Discussing the security situation in Pakistan, the Interior Minister said that due to the continuous efforts of the Government since it took over in June 2013, the terrorism related violence in Pakistan has been lowest in 2015 since the last nine years.

The real challenge now lies in rooting out the facilitators and supporters of these elements who have spread hatred, strife and division in our society.

The Interior Minister said that under NAP, over 14,000 IBOs have been carried out across the length and breadth of the country and it resulted in curtailing to a huge extent the level of terrorist related activities in Pakistan.

Discussing regional situation, the Interior Minister said that Prime Minister Nawaz Sharif showed very positive gestures in improving our relations with India but those efforts got a set back by some recent incidents.

Discussing the situation in Afghanistan, the Interior Minister said that Pakistan has been making sincere efforts for the regional peace especially for the stability, peace and development in the neighboring Afghanistan and will continue doing so in the larger interests of the region.

The Minister continued that despite our efforts, there is a tendency to put the blame for everything which goes wrong in Afghanistan at Pakistan's door step which should not be allowed to continue.

However it is a temporary measure and the SCP overviews the decisions of all the Military courts so the element of judicial review is very much there.

The Interior Minister also welcomed the commitment of the two countries to furthering their cooperation in all the areas of mutual interest.

The British Security Advisor assured the Interior Minister every possible support from UK side in ongoing fight against terrorism, including strengthening and capacity building of Counter Terrorism structures in the country.

There is no lack of commitment or intent on the part of UK to keep the high level cooperation and interaction with Pakistan intact and it will be carried forward in future as well, remarked the National Security Advisor.