Emergence and downfall of CPP

History of a coordinated struggle against imperialism and feudalism 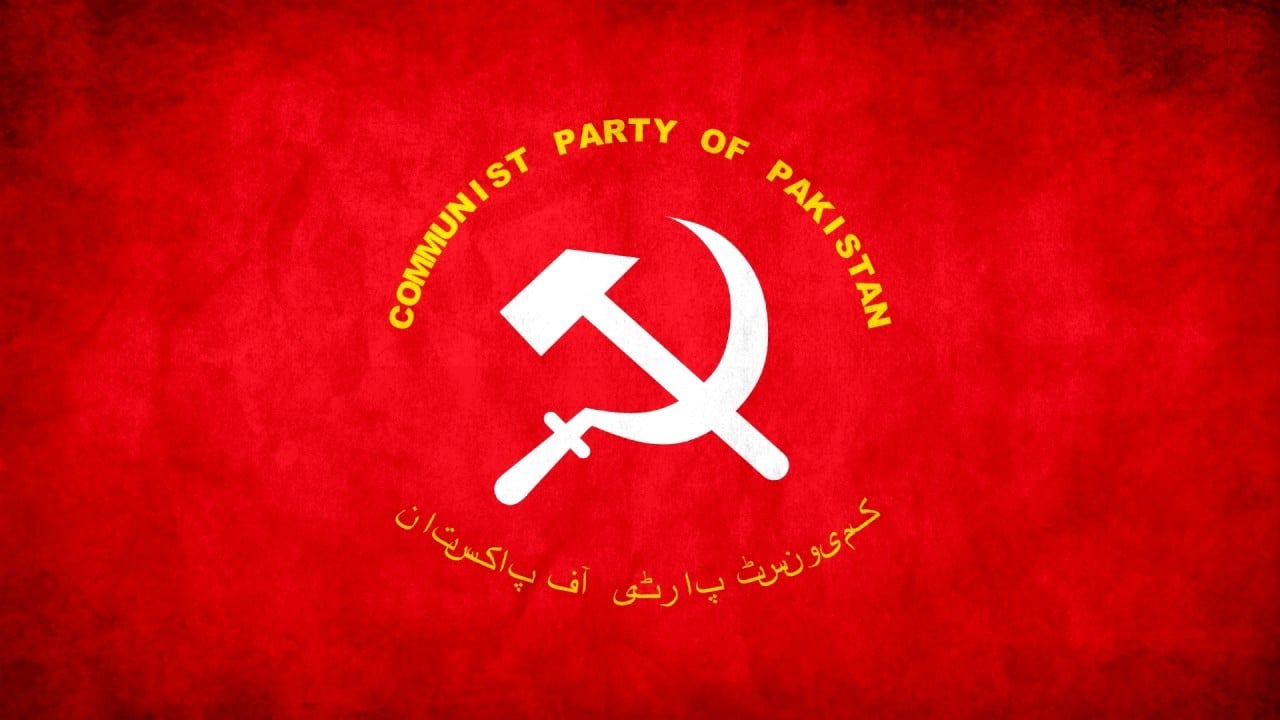 The Communist Party of Pakistan (CPP) was established in the Calcutta Congress of the Communist Party of India (CPI) which was held from February 28 to March 6, 1948. Three members from the West Pakistan, including Muhammad Hussain Atta from former NWFP, Eric Cyprian from the Punjab and Jalal-ud-Din Bukhari from Sindh, participated in the Congress.

Thirty two communists represented East Pakistan and it was decided that Communist Party of East Pakistan would be guided by the leadership of its sister party in the West Bengal. To quote Kamran Asdar Ali’s words, it was technically the CPP that emerged as a separate political entity out of the CPI after the Calcutta Congress. A report was presented specifically on Pakistan by Bhavani Sen, a communist member from India. The report reflected the general attitude of the Indian communists toward the Muslim League and the government of Pakistan.

The report clearly defined CPI policy parameters in the newly-established country. It conceded the weakness of the socialist forces in Pakistan. Under the prevailing situation Sajjad Zaheer was requested to lead and organise progressive elements in Pakistan. He was a committed communist, an extraordinary intellectual and writer. Educated at Oxford University, Sajjad Zaheer then completed his Bar-at-Law after joining the London branch of the Indian National Congress. He was arrested by the British government several times due to his revolutionary and anti-imperial ideas. After assuming the charge of general secretary of the CPP, he reached Pakistan in the summer of 1948 at a time when an arrest warrant was already issued against him.

Sajjad Zaheer was later on joined by Syed Sibte Hasan from Aurangabad (UP, India) and Mirza Ashfaq Beg from Bhopal. In the organisational structure of the party, Zaheer, Beg and Sibte Hasan formed the politburo. In addition to Sajjad Zaheer, Muhammad Hussain Atta, Jalal-ud-Din Bukhari and Mirza Ibrahim, six more members i.e. Shaukat Ali and C. R. Aslam from the Punjab, Ziarat Gul from NWFP, Abdul Khaliq Azad and Hasan Nasir from Sindh were added in the newly-formed central committee. Shaukat Ali, Zaheer and Ashfaq Beg constituted the new Central Secretariat of the party. Provincial committees were reconstituted and Pakistan Trade Union Federation (PTUF) was organised with Mirza Ibrahim as president, Dr Malik as general secretary and Faiz Ahmad Faiz as vice president.

Progressive Writers Association (PWA) was founded and close contacts were established with editors of newspapers like Pakistan Times and Imroz. In 1950, a Peace Committee was constituted with Pir of Manki Sharif as president. Mahmud Ali Qasuri, Ghulam Muhammad Lundkhwar, Syed Matlabi Abadi, Afzal Bangash, Mian Iftikhar-ud-Din and Tahira Mazhar Ali Kahn were included as its members.

Notwithstanding Sajjad Zaheer’s efforts to organise CPP on solid foundation, there emerged differences of opinion within the party. At the time when the CPP needed a Pakistani-specific thesis, Zaheer blindly followed the Ranadive line of aggressive and militant approach. Jalal-ud-Din Bukhari made some critical statements about this approach. His argument was that CPP should continue its political alliance with the Muslim League which he deemed one of fundamental requirements for the consolidation of the communist movement. But he was accused by the CPP leadership of deviating from the party official policies. In 1949, he was asked to leave the party. Critical voices were raised by senior communist members condemning CPP alliances and close relations with people like Mian Iftikhar-ud-Din.

According to Eric Cyprian all these leaders whether Punjabi, Pakhtun or Sindhis were reactionary and were raising progressive slogans for their own political interests. Reformist leaders within the CPP were labeled as of doubtful nature. He pushed for a comprehensive policy of imparting training to the new cadres.

Sajjad Zaheer was a committed revolutionary under the influence of militant communists like B. T. Ranadive. He gave him instructions about the functioning of the party on aggressive line. In organising a strong communists’ cadre he pursued a coordinated struggle in India and Pakistan that would eventually lead towards common goals of abolishing imperialism, feudalism and the establishment of democratic revolution. Although till recent time communists were treated as friendly progressive comrades and allies in the anti-colonial struggle of the Muslim League.

However, the new party did not cut off its links with the CPI which at the end backfired and built a shocking image of CPP among the general public and the security establishment in Pakistan. Owing to these ambiguous policy formulations and some other strategic factors it soon lost its soft political bearing.

The strategy adopted by the CPP was to utilise leftist organisations and secular parties for its own advantages. The communists throughout Pakistan wanted to infiltrate into the ranks of mass-based parties. However, in the long-run using other party apparatus as covers proved disastrous in achieving the party objectives.

In the first phase, the CPP leadership used different political platforms -- for example Awami League and Gantantari Dal in East Pakistan and Azad Pakistan Party in West Pakistan -- to promote its political agendas. This masquerading policy under different party labels was at the end proved detrimental for the CPP. It did severe damage to the party structure by weakening its central authority and control over the party workers. The propaganda of the rightist parties was also largely instrumental in creating a negative image in the minds of the masses about the CPP.

The most dashing event which shattered all the hopes of progressive forces in Pakistan was CPP’s involvement in the famous Rawalpindi Conspiracy Case. It was hatched by some army officers in collusion with communist leadership to overthrow the government of Prime Minister Liaquat Ali Khan. The main figure in the whole affair was General Akbar Khan who always expressed his resentment against the Muslim League leadership and its subservience to the Anglo-American imperialism. He suggested to some of his likeminded friends replacement of the civilian setup in the country.

Latif Afghani, a communist in-charge of organising progressive elements in the army, reported the intentions of Akbar Khan to Sajjad Zaheer. He called an emergency meeting of the core leadership of the CPP in the central secretariat. It was attended by F. D. Mansur, Lal Khan, C. R. Aslam, Shaukat Ali, Muhammad Afzal, Ashfaq Beg and Sibte Hasan. After hectic debates it was finally decided at the insistence of Sajjad Zaheer to join hands with the discontented army officers.

It was in the second meeting on February 23, 1951 that Akbar involved some communist members in his proposed plan. Sajjad Zaheer, Muhammad Hussain Atta and Faiz Ahmad Faiz participated in that momentous meeting. It was agreed upon between them that governor general and prime minister were to be detained and a proclamation order was to be issued in the name of the governor general dissolving the existing setup and forming a new government under General Akbar. General Akbar would withdraw the arrest warrants against all the CPP members. In addition they would be free to organise peasants, students, lawyers and ordinary workers. In return the CPP would publicly support the new government and the coup.

Downfall of the CPP

The disclosure of the Rawalpindi Conspiracy played havoc with the communist circles. Within a short span of time the party leaders, including Sajjad Zaheer, Sibte Hasan and F. D. Mansur, were arrested. The underground apparatus of the CPP was totally smashed and all its secret documents and files were captured by the police. It produced a demoralising effect on the young workers of the party. In the post-1951 period, the CPP miserably failed to organise itself. It received such a severe blow that crippled the very fabric of the communist politics.

By 1954, Pakistan foreign policy had made a decisive turn in favour of American-led Cold War policies. It joined the US-sponsored CENTO and SEATO which greatly influenced the internal and external policies of Pakistan in favour of the Capitalist bloc.

Meanwhile, the Pakistani government declared a ban on the CPP in 1954. In the prevailing situation, Sajjad Zaheer left for India after his release in 1956, Muhammad Afzal went to England; Ashfaq Beg disappeared for some time and then escaped to Moscow. Other stalwarts such as Muhammad Hussain Atta and Shaukat Ali left the party. Factionalism spread in the ranks of the party and each group claimed to be the true heir of the CPP.

After imposition of ban on the CPP, majority of its workers joined the Awami League and GD in the East Pakistan because of its secular posture, anti-imperialist stance and efforts for maximum provincial autonomy. Majority of them gathered around Bhashani who was already very famous among the peasants and laborers in East Pakistan. In the Punjab, they were largely absorbed by the Azad Pakistan Party (APP) of Mian Iftikhar-ud-Din who was a close friend of Sajjad Zaheer.

In NWFP, initially they associated themselves with the Khudai Khidmatgar Organisation founded by veteran Abdul Ghaffar Khan. In Karachi, there existed a loose communist organisation which acted independently. In addition, there was communist infiltration into the Hari Committee in interior Sindh. In Balochistan, majority communists joined hands with the Astaman Gal and Wror Pakhtun led by Ghaus Bukhsh Bizenjo and Abdus Samad Achakzai respectively. In 1957 when NAP was established in Decca, it provided the much needed platform to the communists, socialists and the progressives in Pakistan.

Emergence and downfall of CPP