Terror in our midst 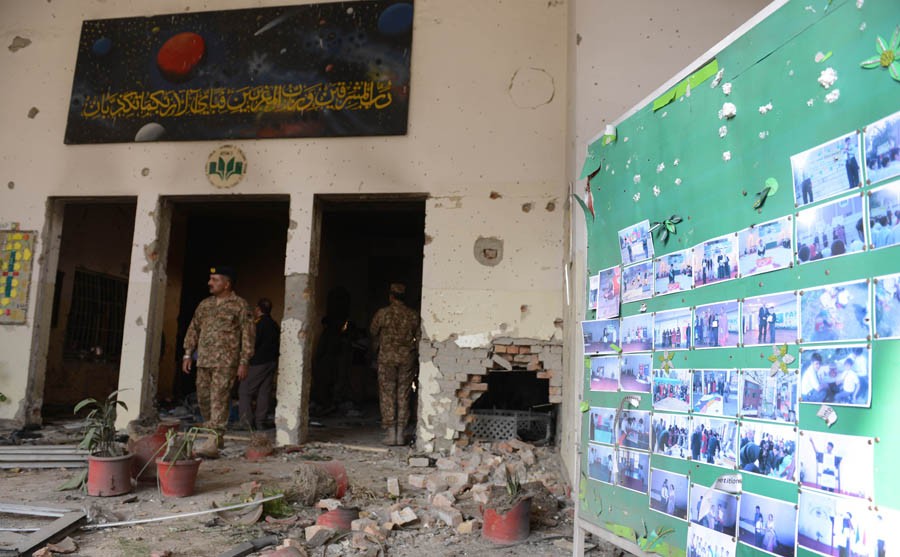 Tehreek-e-Taliban Pakistan’s (TTP) Ehsanullah Ehsan’s confessional statement on television followed by a long interview seems to have raised a lot of eyebrows. It has hurt all those people who lost their loved ones to a soulless battle launched by the TTP.

Notwithstanding the tears shed by many including the parents of the 140 dead children of Peshawar, people saw further showcasing of the TTP spokesperson Ehsan on television in which we were all reminded that there were several aspects to his personality including him being a poet and a writer.

However, arrogant and rude this may be, the entire process of showcasing Ehsan cannot be tolerated until and unless we constantly remind ourselves that the man we saw on television is more than flesh and blood -- he is a military strategy, a tactic, a social disconnect, and a poor foreign policy.

For some of those, who believe they know the Prussian military theorist Clausewitz enough, Ehsan’s confession will work towards building a strong case for India’s nefarious involvement in financing terror in Pakistan. Besides Kulbhushan Jadhav, the Indian spy in Pakistan’s custody, we now also have Ehsanullah Ehsan’s confession to argue that Pakistan indeed is not the only country involved in aiding and abetting terrorism. If we have the Lashkar-e-Taiba (LeT) and Jaish-e-Muhammad (JeM), India too was feeding the TTP to harm Pakistan. Indeed, statements from India’s National Security Advisor Ajit Doval regarding paying Pakistan back in same coin is a confession that is now corroborated by what Ehsanullah Ehsan had to say.

Interestingly, this may have built a case against India within Pakistan but not in the larger international community which may not be too impressed by the lack of transparency of Ehsan’s admission. For anyone even remotely familiar with how the police work in South Asia, it would not be difficult to comprehend how confessions work at the hands of security agencies. Despite Pakistan’s questioning of Mumbai attacks trial, the process was far more transparent and convincing for the world. This is not the Judeo-Christian world not believing Muslims but us not making a strong enough case.

The world would seriously like to question how the Afghan Taliban manage to move around with or without documents in Afghanistan in which, according to Ehsan, movement was so difficult that for the TTP it was only made possible by Indian intelligence. Wonder if the Afghan Taliban, whom Pakistan believes should be included in the future governance of the country, were also getting permits from the same source? Self-victimisation can work to an extent and no more.

The entire process of showcasing Ehsan cannot be tolerated unless we constantly remind ourselves that the man we saw on television is a military strategy, a tactic, a social disconnect, and a poor foreign policy.

Nonetheless, Ehsan’s confession is also geared at de-moralising Taliban members and discouraging the youth who may be tempted towards the group -- imagine seeing one of your own denouncing an ideology that you considered sacrosanct. Surely, Ehsan’s interview would have more impact than perhaps twenty Ghamidis put together. Being one of the TTP, him telling them that their ideology is wrong will probably have a greater impact.

While this may work, it also raises the question of efficacy of this approach in an environment of mistrust between the state and society. A glimpse at the Muslim Brotherhood’s history in Egypt will show that, despite numerous crackdowns on the group during the last five decades, it managed to work its way back into the society because people were skeptical of what the state was doing. People considered the Egyptian state under various governments as a stooge of the US and the West.

Despite the fact that we are no longer aligned with the West, ordinary people do not really draw that fine distinction. I do not see the young university student in Multan, who questioned me about why the state was opposed to Taliban that were on the right track, turn away from her belief just because Ehsanullah Ehsan had confessed. I am not arguing that this may not help but the extent to which this will have an impact is questionable. In a state that discourages independent research and analysis, who will have the courage to present different results other than what the policy-makers want to hear?

Watching Ehsan’s confessional statement, I was reminded of a series I had read as a child. This was over a hundred volumes of a story called ‘In Search of Death’ in which the protagonist always comes back to life. Whatever the perceived benefits of keeping the man sweet for the time being, the fact that he was not put through a judicial process and subjected to similar treatment as the others accused, is indication enough that he has the power to come back to life.

The question is that why can’t the same anti-terror law (Anti-Terrorism Act) that was used for apprehending and incarcerating Mehr Abdul Sattar of the Okara Peasant’s Movement be applied against Ehsanullah Ehsan?

Or is it that there is an underlying layer of strategy that aims at co-opting Ehsan in order to reach out to others of his kind which, in turn, may become effective as the conflict rages further between Pakistan and Afghanistan. Only if ordinary people could learn the meaning of strategic terms, they might understand that South Asia remains engrossed in a war for which partners and assets may come in handy at some stage! In fact, the enemy could be regional state actors or the growing influence of ISIS in Pakistan and Afghanistan. Ehsan’s former colleagues could help fight those hardline militants that crave for more blood than what we saw in APS in December 2014.

The question is that despite such confessions, how does one begin to trust these militants? And while the state is engaged in repairing relations with these warriors, an immense mistrust may already have sunk in amongst the society. The mothers, daughters, sisters of many including hundreds and thousands of soldiers would probably want to know what their loved ones died for: If Ehsan is to be celebrated then what are we -- martyrs or collateral damage?

Terror in our midst