As the Canal Bank Road widening project takes off, the space is likely to shrink for the common commuter -- at least till the cows come home 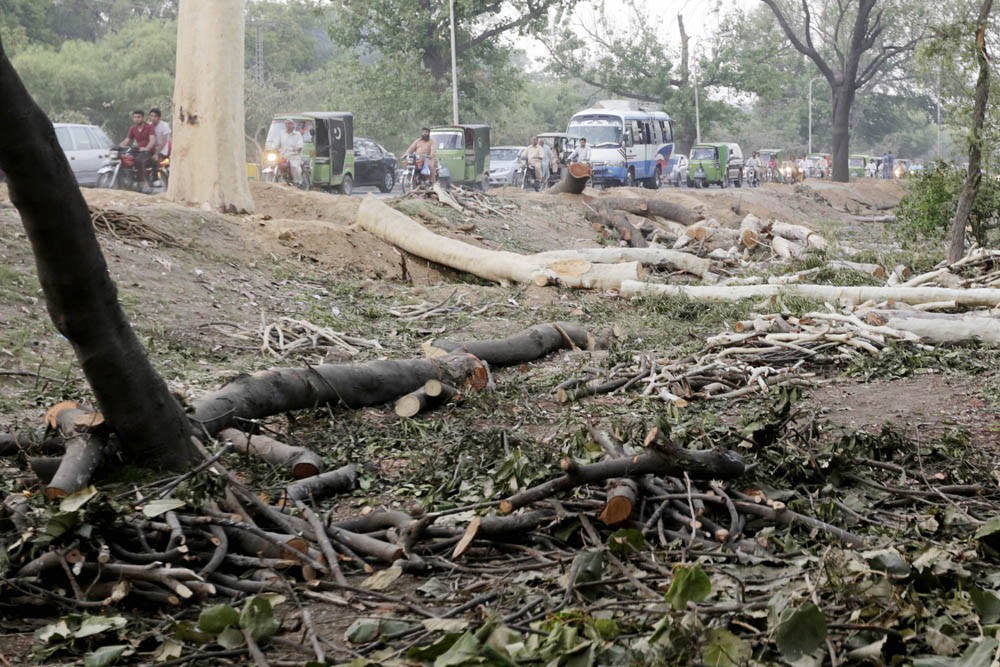 At a time when most roads of Lahore present the picture of a plundered land, what with the myriad trenches kicking dust in the air, heavy machinery installed at various points spoiling the cityscape -- all thanks to the Orange Line Metro Train project currently underway -- the government has rolled out a plan to remodel the Canal Bank Road. And to think that it involves cutting of (estimated) 1,301 trees along the way!

To an already frustrated commuter, having to divert their vehicles on the Canal Rd in order to avoid the traffic mess, this spells horror. Which road would they take now to find respite? They don’t know yet.

As the Canal Road widening project makes headway, the space is likely to shrink for the commuters -- at least till the cows come home.

One wonders why the Punjab government is in such a big hurry to launch a number of road construction projects at the same time. Obviously, this shows a lack of vision, as the people routinely get involved in traffic snarl-ups and there are environmental hazards grossly overlooked.

Quite like the OLMT, the Canal Road widening project has a hefty budget, estimated at Rs7.391 billion. The critics are already seeing it as a political stunt on the part of the government, meant to add another ‘feather’ to its cap. Some call it a result of superficial studies conducted by the incapable officials of LDA, TEPA, NESPAK and CDGL who didn’t tally the technical details of the Lahore Master Plan with the demands of the changing times, ecology and vehicular density.

According to the LDA spokesperson Sohail Janjua, the project was greenlighted back in May 2014. It involves road widening in two segments -- from Doctor’s Hospital to Thokar Niaz Baig and from Dharampura to Harbanspura -- by six metres, including the provision of service roads.

It also entails realignment of the Jail Road underpass, construction of Chaubucha underpass, u-turn bridges, and remodelling of the existing underpasses and walkways.

The project is expected to complete in two phases. In the first phase, the Punjab Horticulture Authority (PHA) shall uproot 1,301 trees (marked as red). LDA has already initiated a pre-qualification process to outsource work on widening and remodelling.

Canal Bank Road is an important artery of Lahore. It is the longest double road, connecting areas lying to the north of the city (Dharampura, the Mall etc) with those in the south (Multan Road and Raiwind Rd). It also bisects the city serving as the main feeder or link road to all of the major inner city roads such as Link Road, Ferozepur Rd, Jail Rd, and the Mall.

Over time, the traffic situation on the Canal Rd has worsened. The number of vehicles has surged from 13 per 1000 inhabitants to 50 per 1000 inhabitants, and this is likely to grow in the coming years. All told, traffic volume here is more than thrice the capacity of the existing road -- approximately 100,000 vehicles per day -- which makes it one of the busiest roads in Lahore.

The said project is being promoted as the only solution to the problem. Only, it is ill-conceived and does not take into account the basic environmental and traffic engineering issues.

The green activists have been up in arms. Lahore Bachao Tehreek even moved the apex court last year. Its argument was that development work could not be carried out in the Canal area under the Lahore Canal Heritage Park Act, 2013.

A Mediation Committee was put in place, following a Supreme Court directive. It was composed of Sartaj Aziz, National Security and Foreign Affairs advisor to the prime minister, and Sardar Ayaz Sadiq, Speaker, National Assembly, among other members of the Lower House.

The SC also ordered to restart the project. As per the initial plan, an 8-km stretch of the road was to be widened. However, now it would be a mere 3.2-km long piece.

It is interesting to note that the government went ahead with the project without giving much regard to the recommendations made by the committee.

Talking to TNS, a member of the Mediation Committee Rafay Alam says the Canal widening project shall serve the purpose for a short term. "Remodelling of the road and constructing underpasses is no solution. Until and unless modern traffic management system is enforced, hope for improvement is dim."

Alam pans the project as being car-centric. "The Canal Bank Road does not have the same traffic mix -- car, motorcycle, bicycle, public transport, pedestrians -- throughout till Harbanspura. It varies as per the living standards of the people residing on both sides of the canal," he says.

A NESPAK official, seeking anonymity, identifies a loophole: "It’s not been incorporated with the Metro Bus feeder routes’ plan."

He insists that the CM Punjab Shahbaz Sharif is aware of the fact but he can’t wait for the project to complete.

A good 50 registered and unregistered housing societies have come up on both sides of the canal in the last decade or so. These societies have unplanned and direct access routes to the Canal Rd. The vehicular movement, thus generated, continues to throws the traffic out of gear at different parts of the canal.

Spiral commercialisation on both sides of the canal is causing immense stress on the already overburdened traffic volume on the road. As per LDA rules, commercial activity is not allowed on the Canal Rd.

Given the rapid commercialisation, the proposed road widening won’t look good even if two or more lanes are added.

The project has nothing to do with traffic mess at Lal Pul, Taj Bagh, Taj Pura and Fateh Garh intersections.

Canal Rd has 12 intersections that attract traffic from link roads. The designed capacity of these intersections has proved insufficient in entertaining large traffic volumes that lead to bottlenecks. There is no word on the issue of revamping them.

Furthermore, the project shows no care for designing bus bays, rickshaw and taxi stands at the proposed length of the road.

TEPA director Mazhar Husain defends the project, saying that more than 0.3 million vehicles ply on the Canal Bank Rd per day. "The project has been designed as per international standards to help the traffic flow."

The Mediation Committee proposed to LDA to restrict the usage along certain parts of the Canal Rd of particular categories of vehicles. For example, goods vehicles should take the Ring Road to access the M2 or N5. Besides, private vehicles can be discouraged at certain times and at certain places.

With the launch of the project, more than 17 species of trees shall be affected. The trees provide habitat to more than 20 species. WWF-Pakistan alarms that with the proposed widening of the road, the centuries old ecological linkages would be broken resulting in habitat destruction for birds and small animals. PHA Director Javed Hamid says that for every tree that is felled, four eco-friendly trees shall be planted.