All about a handshake

SAARC summit ended with a desire that Pakistan and India would move ahead of their stated positions for integration, peace and prosperity in the region 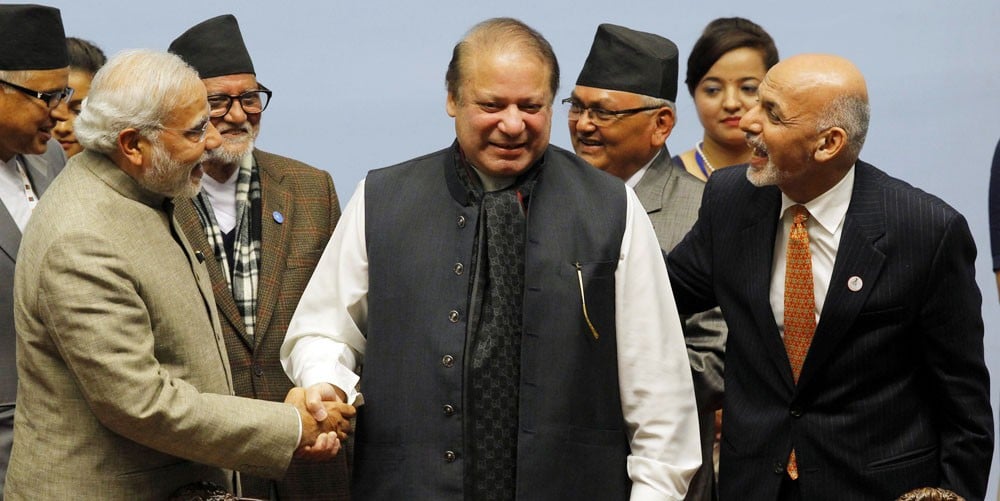 A 30-second handshake between the premiers of two nuclear neighbours, some photo shots and exchange of pleasantries; this is how the drama of 18th SAARC summit concluded in Kathmandu.

One should not expect that this handshake would bring any major difference in troubled relations between India and Pakistan. However, this gesture at least partially helped to salvage the theme of the summit, i.e., "Deeper Integration for Peace and Prosperity". Having said it, the fact remains that integration, peace and prosperity would only come when there would be trust among SAARC nations.

The lack of trust was very evident when SAARC was being conceived in 1985. India took this initiative as a Pakistan-backed attempt to counter India with the help of other regional neighbours. Whereas, Pakistan thought it was an Indian attempt to strengthen its influence. In fact Article X was inserted in SAARC Charter on Indian suggestion to keep bilateral issues out of the mandate of SAARC. However, Article X turned counterproductive as now SAARC has been held hostage to Pakistan and India’s bilateral issues.

Having said it, one must admit that rest of the six countries did get benefit of SAARC especially when it comes to their bilateral economic relations both with India and Pakistan.

A bilateral meeting between Pakistan and India did not take place and both the Pakistani and Indian premiers had had bilateral meetings with rest of the six heads of government/state. I am sure one would have expected slightly mature statesmanship from regions’ most powerful leaders, especially when they are mandated to lift millions from poverty, hunger and impoverishment.

It goes beyond saying that the world cannot achieve any of its development goals, be MDGs or forthcoming SDGs, unless South Asia delivers. According to MDG 2014 report, one third of the world’s 1.2billion extreme poor lived in India alone. Bangladesh houses another 5 per cent, Pakistan around 1.7 per cent. Can international community think of changing world’s poverty profile if three countries housing 40 per cent of world’s poor are not talking to each other on collective ways and means of reducing poverty, increasing agricultural productivity, ensuring food and nutritional security in the region, providing quality education, eliminating illiteracy and providing vocational education and training to the youth of the region.

True some of these things do get space in finely drafted Summit declaration. However, in the context of weak implementation mechanism and even weaker institutional arrangements, many of such declarations get reduced to a wish list.

The seriousness of SAARC governments may be gauged from the fact that only 18 annual meetings could be held during last 29 years. Perhaps this fact led to the decision to hold the SAARC Summit every two years instead of the current provision of organising it annually. It was also decided to hold the next SAARC Summit in Pakistan in 2016. I hope by then, Pakistan and India would be in "talking terms" enabling Indian leadership to accept Pakistan’s invitation.

South Asia is an energy thirsty region but in an ideal situation the members may meet each other’s urgent needs. In this context the only breakthrough in Kathmandu is ‘SAARC Framework Agreement on Energy Cooperation (Electricity)’. This may open the door for electricity trade among the countries.

South Asia is an energy thirsty region but in an ideal situation the members may meet each other’s urgent needs. In this context the only breakthrough is ‘SAARC Framework Agreement on Energy Cooperation’.

Reportedly, Pakistan showed its initial reservations, but finally ratified the agreement after other heads of state and governments took up the matter with PM Nawaz Sharif. With the energy pact in place, all the SAARC members have agreed to "enable" the concerned agencies in their respective countries to develop transmission interconnectivity within the region. The agreement would allow power supply from surplus countries to those with deficit in the region. However, whether Pakistan can make use of it to meet its electricity demands is conditional to improved trust level between Pakistan and India. Right now, it seems quite difficult that government may convince all stakeholders to start energy trade with India.

Leaders from eight SAARC member states also univocally stressed on collective efforts in combating terrorism in all its forms and manifestations and having effective cooperation among the member states to prevent trafficking in persons, arms and drugs and exploitation of children for forced labour.

Recent monsoon floods in South Asian countries raised the importance of regional cooperation on cross border information sharing, early flood forecasting system as human induced and natural disasters affect everybody irrespective of national boundaries and socioeconomic status. Sharif did raise this issue explicitly and it was decided to merge four Regional Centres -- Coastal Zone Management Centre (Male), Meteorological Research Centre (Dhaka), Forestry Centre (Bhutan) and Disaster Management Centre (New Delhi) -- to create a new centre named ‘SAARC Environment and Disaster Management Centre’. The location of the centre will be decided later. However, it is a step in right direction and one hopes that if get implemented effectively, it would have long term dividends for everyone.

Like previous summits, the heads of state/government once again reaffirmed their commitment to the principles and objectives enshrined in the SAARC Charter. They renewed their resolve for collective regional efforts to accelerate economic growth, social progress and cultural development, which would promote the welfare of the peoples of South Asia and improve their quality of life. They also talked of "effective implementation of all SAARC programmes and mechanisms by rationalisation and performance evaluation on a regular basis".

However, there are certain fundamental issues that need to be addressed for turning SAARC into an effective body for regional cooperation. I wrote in these pages many years ago that "Demilitarisation is a must for people-centric development in South Asia. How can South Asian countries contribute to integration, peace and prosperity when they are busy in a maddening arms race? How can they afford to spend on people’s welfare when they have egoistic mind-sets and are not willing to face each other? How can they talk of joint efforts to combat terrorism when their intelligence agencies are making plans to destabilise the neighbouring countries? How can they talk of conserving water resources when Pakistan and India, the two biggest countries in the region, are directly responsible for the melting and receding of Himalayan glaciers?

In fact, many of the problems facing the region can be solved simply by demilitarisation. I am still sticking to my arguments that we need to give peace a chance for the sake of regional prosperity.

The second core issue hampering any progress towards realising the objectives of SAARC is the draconian visa regime. SAARC heads of state/government again talked of promoting trade in services, tourism, cultural cooperation, education, etc. Who can disagree with the wisdom of SAARC leaders on this issue? However, a soft visa regime is a must to achieve these objectives. How can one think of promoting trade in services, tourism, cultural cooperation and education with the existing visa problems, especially between Pakistan and India, Pakistan and Bangladesh, and Bangladesh and India?

SAARC has gained international recognition. Currently, Australia, China, the EU, Iran, Japan, Korea, Mauritius, Myanmar and the US are observers to the association. An enhanced role for SAARC observes especially China was a major point of discussion during the Summit. However, India was not comfortable with such arrangement. Thus (with caution) SAARC leadership agreed to review and analyse a previous document regarding the engagement with the observers to establish dialogue partnership.

All about a handshake