In defence of public imagination 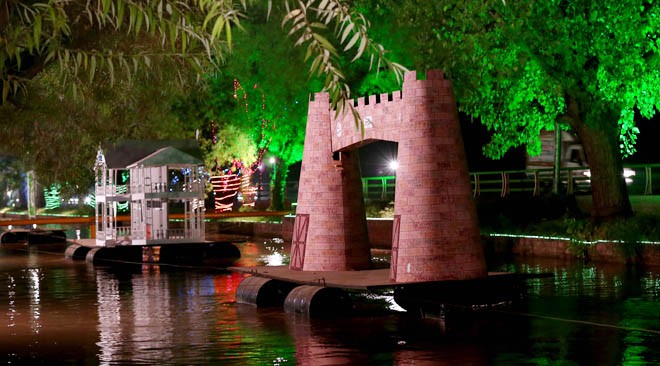 One summer vacation, more than 10 years ago, I was invited to see some artworks made by students. Like any young teacher, I got excited by their engagement with art-making even during the annual academic break. But, on visiting their place of work, I was shocked -- to see a large sculpture, a pigeon pierced by a sharp knife, held by a human hand with blood stains on the steel blade and fingers. On inquiry, I was informed the sculpture was meant to depict the Pakistan Movement, and was part of the project to decorate the Canal on Independence Day.

Thus, a new tradition of decorating (or desecrating) the Canal was launched.

Adorning the Canal has become an annual ritual, and continues beyond the Independence Day or the month of August. The main purpose is to beautify the city -- apart from slowing down the traffic along the Canal, with commuters looking left or right to savour the sculptures floating on boats or fixed near roadsides. Some of these sculptures are lit at night -- as in any developed country, where electricity is available at all hours and in such abundance that it can be used for the purpose of decorating cities and delighting its peoples.

These floating things, no matter when a person views them, day or night, are quite thought-provoking. Say, if a survey is conducted, a majority of population will endorse the existence of these ‘artworks’, but a majority of artists will denounce their aesthetic value -- in fact, they will refrain from admitting these are ‘artworks’.

For many professional artists, large scale animals, models of village houses, big flowers or horse or bullock carts are merely examples of kitsch mentality, which is a politically-correct term to describe bad taste!

I remember, once while driving on the Canal, an eminent painter saw a sculpted buffalo installed next to where a group of traffic wardens were stationed, and said, "What do they think, Lahoris are not familiar with buffalos, and don’t they know what they look like?"

The comment, I thought, was significant, as it reflected the reason for preferring this kind of imagery in public space.

Perhaps, the only positive aspect of this endeavour is that it offers some sort of pleasure to people -- something to admire, appreciate and be excited about. So, it is not surprising that many gather to gaze at these floating works and take photographs, more recently take selfies with the floating animals and models of villages in the background. For them these objects are signs and emblems of beauty, if not art, and they feel proud to be taking part in this act of beautifying the city.

No doubt this kind of public display must be admired but, as far as the choice of imagery is concerned, much is desired. One is compelled to think who actually decides on this sort of art for public display. Are they still holding on to the tradition of our colonial rulers, when anything exotic -- like a bullock cart or a woman drawing water from a well -- became great subjects for arts. Have our officials adopted a foreigner’s eye or a simplistic approach towards promoting works that define art or culture on a superficial level?

But if the public likes it, then, perhaps, all these samples or models of bad taste are justified -- because one cannot adopt an elitist position by denying and rejecting something approved and admired by the general population.

Yet, the act of our ruling classes of offering public a low quality art and selecting the high quality for their own art collections in their homes is an elitist attitude. Basically, the prevailing understanding about art in our country is that works of quality are for those who can afford to pay a high price, while something that is free for public may not necessarily fall in the realm of art. Therefore, it is not surprising that no artist of any merit has ever been commissioned to create works meant for public sites.

The installation of these huge flowers and camels and elephants dancing on the surface of the polluted waters of the Canal is because people admire and relate to them. But these notions are as banal as the reason for making terrible Punjabi or Pushto movie based on public demand. That instead of uplifting public taste by providing good cinema, our film-makers are churning out films that can be described best by some ‘F’ words, such as failure, flops and so forth…

Public understanding of art is questionable, because, in most cases, the line between the act of recognising and understanding art is blurry. Art is neither limited to the function of recognising an object as real nor a complex concept to be understood. Actually, a bit of both gives a true pleasure to its viewers as well as transcends and transforms their ideas about art and life -- and that is something that is draining away at our canal!

In defence of public imagination