Look, Gail.” Roark got up, reached out, tore a thick branch off a tree, held it in both hands, one fist closed at each end; then, his wrists and knuckles tensed against the resistance, he bent the branch slowly into an arc. “Now I can make what I want of it: a bow, a spear, a cane, a railing. That’s the meaning of life.”

“Look, Gail.” Roark got up, reached out, tore a thick branch off a tree, held it in both hands, one fist closed at each end; then, his wrists and knuckles tensed against the resistance, he bent the branch slowly into an arc. “Now I can make what I want of it: a bow, a spear, a cane, a railing. That’s the meaning of life.”

“Your work.” He tossed the branch aside. “The material the earth offers you and what you make of it.”

- The Fountainhead by Ayn Rand

Only rarely do we come across someone with rules like Howard Roark’s: “what can be done with one substance must never be done with another.” It’s seldom that we don’t fancy ideas which are “useless” and “pointless”. As the author repeatedly points out throughout the book, most of us are mere shells containing the opinions of [our] friends, the picture post cards [we’ve] seen, the novels of country squires [we’ve] read. It’s easy to manipulate us. By recommending certain (not necessarily talented) individuals in multiple fields of art as the best our society has to offer, one Ellsworth M. Toohey could alter the public opinion. What the majority thinks is the great play, book, architecture, will be accepted as such without question. 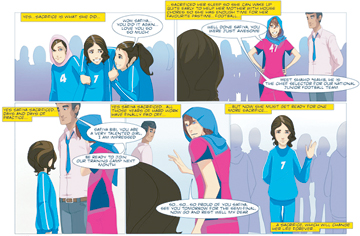 The fact that art is central to social change as depicted by several historic movements is what Mr. Imran Azhar, Founder and CEO AzCorp Entertainment (a for-profit social enterprise), recently pointed out at Art-Technology and Social Change held at Habib University. It’s almost two years since Mr. Imran started publishing a series of comic books, and his concerns while interacting with the bunch of individuals belonging to Arts, Science/Engineering and Development departments were to build upon each other’s strengths to provide meaningful and entertaining stories.

Art, according to him, is about rebellion, about revolutions, as demonstrated by the notorious graffiti artists Banksy and Meek. The first content AzCorp generated was Team Muhafiz, a group of ten teenagers who, despite having different cultural backgrounds, fit the bill for fighting the social injustice. The content strayed from the typical Muslim-Christian-Hindu/Sunni-Shia themes to focus only on “the good” in the story. The script challenged stereotypes (e.g. a girl is passionate about taekwondo; a boy, dressed in standard Muslim attire, is tech-savvy). It also showed villains without projecting prejudices for any particular ethnicity; the goons were simply people with bad behaviour.

We got a lot of hype from media; we had the right characters; we were publishing in both Urdu and English. Somehow, it wasn’t enough. There were always moments where three-quarters of the group would go blank as soon as Azhar mentioned Team Muhafiz or any of their achievements for that matter; they had no idea of the work AzCorp was doing.

“For, after all, how do we know that two and two makes four? Or that the force of gravity works? Or that the past is unchangeable? If both the past and the external world exist only in the mind, and if the mind itself is controllable - what then?”

Comic books are just one way people can stand up for a cause. During his visit to Africa, Azhar had seen various social challenges being handled through art and technology. And he realized that even as he wanted to do something good through art, he wasn’t harnessing technology. He didn’t consider using big data or artificial intelligence. He trusted the traditional mediums, i.e. web portal, print, school interventions, holding competitions to get the youth involved. All these endeavors earned him accolades for sure - Team Muhafiz was shortlisted as the Official Nominee for National Innovation Award 2015 in Art & Design category by the Pakistan Innovation Foundation - but the buzz tends to die just as quickly. Where the “art” should have opened boundaries and made us reimagine the future, the traditional method to gain traction was not helping. Even beginning with apps, theatres, and making short documentaries to post on Facebook was of little help since these are simply the tip of the iceberg and they had to dive deep into technology to really know.

The French Revolution (or perhaps you may find the colonization of the subcontinent more relatable) had caused far-reaching consequences in cultural arenas. The point is not to focus on any one movement; there have been numerous of those, especially through invasion where money was used extensively for one cause: to promote their own art and culture. 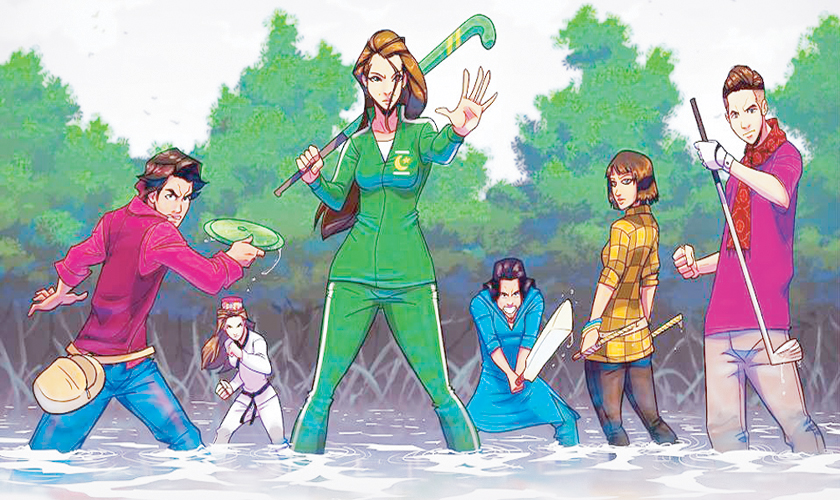 In order for the ideologies to reach the common man, Azhar shared the lesson he learnt from this trial phase: you need to get more people involved, you need to partner with those working in different capacities at different departments. This is the age of Internet of Things (IoT) where everything and everybody is connected all the time.

If we leverage the technology, there are lots of opportunities for us to improve the social condition, lots of concerns that can be addressed and resolved. How can we, for instance, educate through technology, specifically targeting children who are deprived of it. It’s essential, however, that we monitor and evaluate the data. This way, we’ll know exactly what’s important and what’s interesting for children and young adults without having to make some sort of assumption for it, whether it’s the outreach, the engagement, or the impact the content creates. 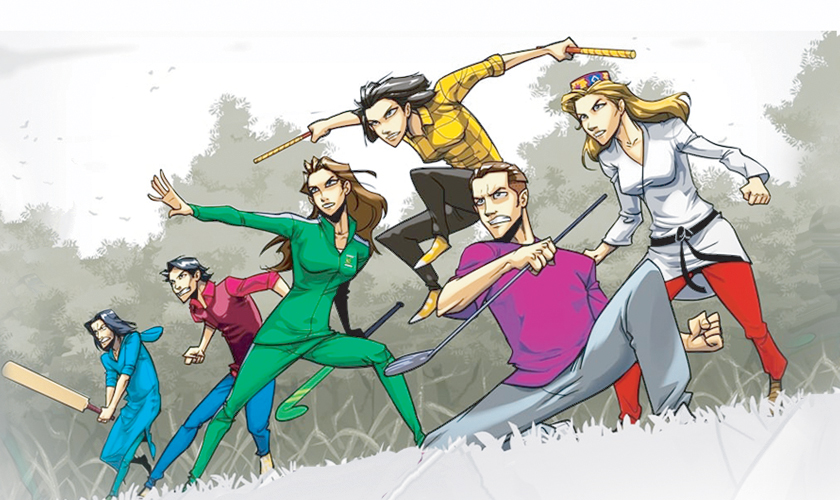 Most TV channels won’t give the prime time slot for such childish stuff. And, if they’re willing to run it on-air, they’ll pay you meagre amounts and force you to look elsewhere because no one’s going to sponsor such content. And so you explore other options; let me rephrase, other tech options. AzCorp Entertainment is working at a prototype game where it’ll be the battle of heroes against villains. Again, it’d mean taking a few precautionary measures. For starters, kids and youth these days are well-informed and get put off the minute you start to patronize them. Plus, the psychological impact of the themes should always be kept in check. Including social service messages like throwing the wrapper in the bin would be a nice addition. And, instead of waiting to secure a contract for a TV programme, you can simply launch your own YouTube channel and pass the message. “Creativity being monetized rather than democratized” should not prevent you from making the change you want to.

Then there’ll always be the debate of how portraying the issues (e.g acid attack on women) will show a bad image of Pakistan. But as Mr. Azhar politely explained to the audience, it’s a double-edge sword. If you don’t talk about it, you’d encourage the culprits. Yes, there are repercussions, but you need to find the balance and talk about it.

Seen this way, entrepreneurship doesn’t look like a bad idea; you are reaching out to young people and giving back to the society. Comics or not, trafficking, vani, extremism do exist in our society and hinder our development. It’s about time we stand up against all this, isn’t it?

In conversation with Hadi bin Arshad

Exhibition: a glimpse into artists’ mind