The definition of an army is that it is “a large organised body of armed personnel trained for war, especially on land”. The words of Quaid-e-Azam to the army are very indicative of his vision of its role. He stated, “You will have to be alert, very alert, for the time for relaxation is not yet there. With faith, discipline, and selfless devotion to duty, there is nothing worthwhile that you cannot achieve.” 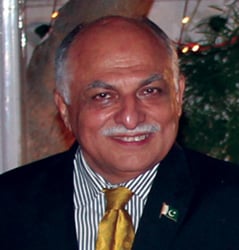 Today, the Pakistan Army has widened the landscape of its activities due to myriad factors that in more ways than one have had an impact on the survivability and sustainability of the motherland. Its primary assignment as the defender of the borders has been compounded significantly with various exigencies that have necessitated direct involvement either in a supporting role or, when it became imperative, from a vantage position.

Pakistan's status as a geo-strategically important country, with many advantages and benefits, unfortunately has been affected by the belligerence, hostility, and meddling of countries on the western and eastern borders. Pakistan was propelled into being the frontline state in the Global War on Terror. The war is being fought not only at the borders but also within the country. Inimical forces, boosted by foreign funding and support, have created havoc with serious repercussions to the integrity and sovereignty of the nation. The colossal loss of men, material, and money has seriously damaged the progress and prosperity of Pakistan.

Terrorism and extremism filtered down to Karachi, the economic hub of the nation. Karachi was in the throes of near anarchy where the city of lights was ruthlessly relegated to become the city of doom. Militancy and breakdown in the law and order situation stained the image of the metropolis and its citizens became captive to the will and might of desperadoes, especially those who had the backing of political parties or extremist organisations. The politicised police force was unable to exercise its writ. The city, province, and federal governments were over-involved in political squabbling and point scoring, much to the chagrin of the Karachi residents.

The private sector was between the devil and the deep blue sea. Investment, commerce, and industry became hostage to the twin menace of terrorism as well as corruption. These two heads of the hydra damaged the comfort zone enjoyed by the private sector, forcing them to seek safer foreign avenues of doing business as well as securing a safe environment for their families and finances. Trade and industry graph nose-dived, educational institutions were under attack, and foreigners made a hasty retreat.

The induction of Pakistan Rangers in Karachi was much desired and welcomed by trade and industry. Karachi Chamber of Commerce and Industry hierarchy was vociferously demanding the implementation of a plan to eliminate terrorism as well as corruption. The men and vehicles of the Pakistan Rangers have been a ubiquitous sight in Karachi for nearly a quarter of a century, and are gradually implementing Operation Clean-up. Despite calls for a fast track response and action, the Rangers have proceeded at their own real time pace and the effectiveness of their operations has restored normalcy to a large extent. In fact, the successes of the last two years have transformed Karachi into a relatively peaceful metropolis as is evident from the upsurge in real estate prices, the huge presence of customers in shopping districts, markets, and plazas, and the booming and bullish activity at the Pakistan Stock Exchange in the city.

It was assumed that the operation against militants and terrorists would be expanded to Interior Sindh and that within a specified timeframe the success in Karachi would be replicated there too. However, political roadblocks, parochial vested interests, and the aversion of the government hierarchy thwarted all notions of operation clean-up in interior Sindh. The rationale is still unpalatable, and for Karachi residents, unacceptable and creating a profound sense of acrimony. This also gave rise to the oft-repeated allegation that the entire operation clean-up was only specific to Karachi and an urban-based political party.

Chief of Army Staff General Raheel Sharif reiterated Pakistan Army’s resolve in breaking down the nexus between terrorism and corruption. He very rightly established that there is an organic link between corruption and terrorism and hence targeting corruption would diminish the hold of the terrorists since these ill-gotten funds are channelised to terrorists too. Corruption is not just Pakistan-specific since it is endemic in most of the third world countries and in some developed nations too. However, the magnitude of corruption has spread ominously and has ensued into a sinister situation where local citizens as well as foreign investors have placed corruption at the top of the list of the damaging factors affecting Pakistan's economic progress and prosperity. The disclosure by the COAS gives further credence to this negativity.

Moreover, the China Pakistan Economic Corridor (CPEC) is a welcome initiative and is heralded as the beginning of global confidence in Pakistan. In today's difficult times, CPEC has instilled hope that its success would be a showcase that Pakistan could exhibit to attract global investment and interest in Pakistan. This is further encouraged by the fact that Pakistan Army is fully behind its implementation and that a special security force has been established to provide security, safety, and confidence to those Chinese citizens who are or will be based in Pakistan. The essence of these measures is akin to the security of the country's strategic assets and is a manifestation of the success of Zarb-e-Azb and other measures.

Corruption is a defining factor that should be termed as economic terrorism. Under the National Action Plan (NAP), corruption has to be tackled on a war-footing basis. Pakistan Rangers Sindh has hinted at nabbing the corrupt in government, in political parties, and in other sectors. However, influential and high profile personalities, known for amassing huge ill-gotten wealth were deliberately permitted to leave the country or are still unabashedly allowed to continue their nefarious activities. National Accountability Bureau (NAB) is a toothless tiger catching small league players while cases against top-notch persons are gathering dust.

The resolve of the army to arrest the corrupt, whether high profile or not, is yet to be seen in genuine reality. The question arises whether there is seriousness in this matter or are there other compelling reasons. There has been no let down in the corruption syndrome and, like termites, it is eating away the moral fabric of the nation. Citizens are taking the announcements of arresting the corrupt by NAB, Federal Investigation Agency, or through NAP with a pinch of salt. At present, these are hollow claims since no tangible effort has commenced.

Recently, there was a renewed call from GHQ for a full-force implementation of NAP, since it has so far been a lackadaisical process and since the fruits of the plan have not been fully realised. It must be implemented in letter and spirit all over the country because the dastardly impact of extremism and terrorism are not isolated cases. The tentacles are spread from Karachi to deep inside North Waziristan Agency. Operation Zarb-e-Azb, despite a heavy toll of men, material and money, has indiscriminately eliminated many areas from the menace of terrorism and militancy. Notwithstanding these successes, it is a fact that terrorism and militancy is still entrenched in many parts of Pakistan.

The 200 million citizens of Pakistan have always looked up to the Pakistan Army. The Founder of Pakistan's message is so true today. He said, "Let us now plan to build and reconstruct and regenerate our great nation…. Now is the time, chance and opportunity for every Pakistani to make his or her fullest and best contribution and make the greatest sacrifice and work ceaselessly in the service of our nation and make Pakistan one of the greatest nations of the world.”

The writer is former president KCCI