Heaps of fresh sangri pods, mostly an underrated local fruit that grows naturally in arid regions, are spread across major markets in the cities of the Thar Desert in summer. This is one of the most important sources of sustenance in the dry desert for both farmers and herdsmen. 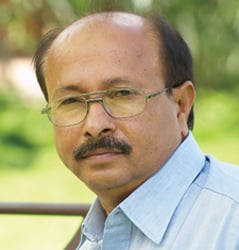 Each trader spreads out sangri in two heaps, one is made up of only the pods for human consumption, and the other has some raw pods with leaves to be used as fodder for animals.

They put sorted sangri pods on display for sale. The prices are fixed at Rs20-Rs40 per kilogram for the kitchen, while Rs10-Rs15 per kilogram is charged for fodder.

Locals in Mithi, the headquarters of Tharparkar district, say that sangri is the last hope for the survival of the people in Thar Desert. When drought and dryness hits the communities residing along the sand dunes in March, this local produce starts selling in the markets and is available till the middle of June.

Average production of this fruit is around 200 kilograms from a single tree. It is sold at the rate of Rs200/kg in the beginning, but soon the prices begin to go down to Rs100 and later at the peak of the season, sangri is available at Rs20-Rs30 a kilogram.

The evergreen flowering tree is called kandi locally. Its common name in English is the Mesquite tree (Prosopis cineraria). Kandi is scattered in the desert plains and is available in the entire district. This tree also grows in other parts of Sindh where it mostly survives in dry areas.

Thari people, mostly vegetarian, are fond of sangri. The local people dry it and preserve it through traditional methods for future consumption. They keep it at homes for months and use it when the need arrives. In some cases it is even gifted to friends and families living outside Thar.

The Thar Desert has been experiencing consecutive droughts for the last three to four years, and various valuable trees have vanished from the desert due to dryness and cutting on a large scale. But kandi, and khabar - locally known as jaar (Salvadora oleiodes), both drought-resistant fruit-bearing trees have always given the hope of survival to these drought-stricken people of the desert.

Krishan Sharma, a local social activist, living in Mithi city, calls sangri a traditional asset of the Thari people. “Sangri is a low cost fruit that almost everyone in Thar puts on their kitchen menu,” he says.

They have different methods and recipes to cook curry and make pickles to maintain its real taste. According to him, many people, who originally belong to Thar, but now live in the bigger cities, prefer to buy some quantity of sangri from the local markets and preserve it through indigenous techniques to use it for the next several months.

“Hotels and guest houses in the desert towns too offer it on their menu, and prepare it as per the customers’ demand. It is one of the traditional cuisines of the Thar Desert,” explains Sharma.

Dr Sono Khangharani, who has studied the trees and natural resources of food in the desert, said the two hardy trees - kandi and khabar, produce fruits and fodder for animals and have been considered the longest surviving trees in arid zones.

The recently designed Thar Commission Report also mentioned these natural sources of food items, which have a major share in maintaining the diet of the Thari people.

He said these products provide important nutrients for both humans and animals. For example, Dr Sono said, “Thar ber (jujube) is rich in iron and in case it vanishes in any area, the children there will face iron deficiency,” he says.

Speaking about the nutritional value of the important shrubs and trees, he said phog (Calligonum polygonoides), kumbhat (Acacia senegal) and others also had medicinal value.

Kirir (Capparis Decidua) is another valuable leafless-thorny shrub mostly found on hard surfaces in the desert's plain areas and canal zones. Its branches are green, and have red flowers, which are also cooked as a vegetable by some people.

It has commercial value in the local markets and some people earn a little through making pickles from the unripe fruit of the kirir tree. Ripened raw fruit is also eaten by the locals, but mostly unripe fruit and flowers attract them.

However, the most important remains the kandi tree in Tharparkar that grows everywhere. For the locals and their animals it not only provides shade from the scorching sun, but its fallen leaves also keep the surrounding area fertile.

Dr Sono narrated some 18 usages of the kandi tree, as it has religious importance as well. “Celebrations are held under or near trees and shrubs. Thadhri is mostly celebrated under the kandi tree, which is also used in traditional marriage customs,” he says.

Its seeds too have nutrients and are dissolvable, which the locals use for stomach problems, he adds.

“The kandi tree survives for about 300 years, and people use its wood to make frames for building water wells. Kandi can sustain in water for up to 150 years. The wooden frame is the base, on which the well is developed,” explains the doctor.

Sangri, the fruit that the kandi tree bears is the most important for the vegetarian populace of the region. “It used to be important even in Rajasthan, but now it has become an underrated dish over there,” Dr Sono tells.

Tharparkar district remains one of the country’s most disadvantaged regions, where deaths of new born babies and infants are reported every year due to malnutrition.

The government authorities are still clueless about the exact nature of the problem.

The people are more critical of the claims made by the government functionaries regarding the measures they take. Indicators of health, education and other determinants of well-being are still unchanged and are at the bottom of the national scale, sporadic and scanty rain fall, dwindled water resources, transient and incoherent grazing, and reliance on exploitative economy even for mundane needs are the permanent features of life in the desert.

In this situation, the government should take initiatives and design policies for at least protecting these valuable trees, which are natural assets for the area and on which people have relied on for generations. The intense heat and drought with scanty rainfall has already damaged the natural vegetation of the region.

If a policy is not framed soon, even the remaining trees and shrubs will disappear.

The government needs to also create and promote livelihood opportunities for the rural populace. One of the methods to do so can be the introduction of sangri cuisine in major cities of Sindh. If this happens, it can earn locals some much needed cash and also help preserve the tree in the long run.

But again, the government needs political will to protect the natural product and vegetation of Thar to benefit the community people.