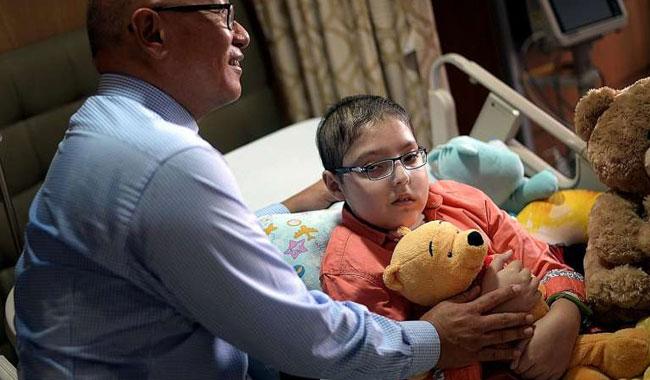 SINGAPORE: A group of strangers pooled together the funding required for a 10-year-old Pakistani boy's treatment, who has registered a strong recovery after almost succumbing to his condition.

All seemed lost for 10-year-old Shayan Khan, who was suffering from infections in his brain, throat, lungs and chest after a complicated surgery in Pakistan to remove his brain tumor. Three months ago, the boy was taken from Pakistan to Singapore, after his condition had deteriorated, via a six-hour flight in an air ambulance.

"Shayan's eyes were closed, he was not talking at all," Mr Ali, Shayan's father, said. "We were not hopeful that he would reach Singapore alive."

However, after the treatment in Singapore, the boy has registered a miraculous recovery and will be on his way back to Pakistan on Friday.

Shayan's father credits strangers for saving his son's life. If it wasn't the crowdfunding efforts of strangers who helped put together money for the boy's treatment costs and hospital bills, Shayan would have never made it alive.

Shayan had been treated in Singapore's Mount Elizabeth Hospital located at Orchard Road. Regarding the boy's situation when he first came in, Consultant neurosurgeon Keith Goh said: "At that time, his condition was very bad. He was in a coma and could not move all his arms and legs."

Such was Shayan's condition that he needed a ventilator to breathe while a tube was inserted to feed him. Another tube was used to drain the excess brain fluid that kept accumulating. His parents found out that they had sold off all of their assets and funds were depleting.

A group of strangers came to know about the boy's plight and started crowdfunding for his treatment in October. More than 500 strangers, including Singaporeans, Pakistanis, Indians and Bangladeshis, chipped in to help pay for Shayan's treatment, or cook meals for the family.

The crowdfunding was able to collect $250,000 for Shayan's treatment. However, $135,000 are still needed to pay outstanding medical bills and another upcoming surgery in Singapore, in May.

Shayan has become stronger and can walk now. The tubes have been removed and he can eat as well as drink and move his limbs better. Cleared of bacterial infections, Shayan still takes medication for a fungal infection.

Ali, Shayan's father, could not be more thankful to the people of Singapore for their love and support.

"We came here and did not know anyone. But now, we leave having known many friends, who have come together to help us. Singapore has changed our lives."