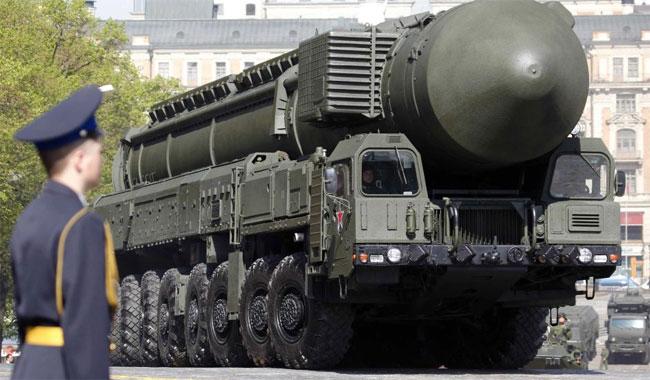 MOSCOW: Russia´s military conducted a series of intercontinental ballistic missile tests on Wednesday, the latest flexing of its muscles as tensions with the US spike over Syria.

Russian forces fired a nuclear-capable rocket from a Pacific Fleet submarine in the Sea of Okhotsk north of Japan, state-run RIA Novosti reported.

A Topol missile was shot off from a submarine in the Barents Sea, and a third was launched from an inland site in the north-west of the vast country, Russian agencies reported.

The latest display of might by Moscow -- which has been conducting regular military drills since ties with the West slumped in 2014 over Ukraine -- comes as tensions have shot up in recent days.

Russia has pulled the plug on a series of deals with the US -- including a symbolic disarmament pact between the two nuclear powers to dispose of weapons-grade plutonium -- as Washington has halted talks on Syria.

The Kremlin has also moved an air defence missile system and missile cruisers to the war-ravaged country to bolster its forces there.

That comes as the West has accused Moscow of committing potential war crimes in its bombing of rebel-held part of the city of Aleppo in support of an assault by regime forces.

Washington has previously lashed out at Moscow for resorting to alleged "nuclear sabre-rattling" as East-West relations fell to the worst level since the Cold War following Russia´s seizure of Crimea from Ukraine in March 2014.