Next time you find yourself in Islamabad and are looking for a holistic experience of the city, give Golra Sharif a try

I always thought of Islamabad as being less interesting for tourists as compared to other major cities of the country, because of a lack of historical landmarks in the city. Little did I know that my perception was to change completely on my next visit to the city; when in my quest to find a historical place on Google Maps, I came across a small town named Golra Sharif. Without further ado, I booked an Uber and embarked on a journey towards the town.

It took almost 20 minutes for me to reach the town. To my delight, I found that it is not the only town in the area. In fact, on my way to the town I passed by many beautiful, green villages with Margalla hills in the background.

First, I headed eastward to see the historical railway station of the town which is almost a kilometer away from the famous shrine of Pir Mehr Ali Shah – minarets of which are visible from far-away.

The Golra railway station is a 140 years old British-built station that used to be a major location connecting a number of cities and destinations. The station welcomes visitors with its all encompassing view of centuries-old banyan trees and a well-maintained Victorian-style building. It was afternoon when I reached the station. There were quite a few passengers sitting on the beautifully crafted wooden benches under the shade of trees waiting for the train as an old shopkeeper fried pakoras in a cafe nearby.

Golra railway station was established in 1881 by the British as a part of their imperial expansion plan to extract raw materials from their colonies. It connected Peshawar, Jhelum, Havelian and Multan. 31 years after its establishment, it was upgraded to a junction (in 1912). The building is one of the prominent remnants of colonial rule and Victorian architecture in the subcontinent. Stone used in the building’s construction is still intact and clean. There’s a small shaded area in front of the building where beautiful old bells are hanging. These bells were once used to announce the arrival of trains.

I always thought of Islamabad as being less interesting for tourists as compared to other major cities in the country, because of a lack of historical landmarks in the city. Little did I know that my perception was to change completely on my next visit to the city; when in my quest to find a historical place in the city on Google Maps, I came across a small town named Golra Sharif.

The railway station was converted into a museum in 2003. One can see a lot of old trains and model engines parked here, including the prominent narrow-gauge steam engine which is at least a hundred years old. Another mentionable engine one can witness at the station is a model diesel engine which used to run a long time ago. While wandering on the railway track and looking at old engines, I came across a small blue letterbox, installed on an old bogey. A plate near that box reads: “This letter box which was taken from a railway station on the Tonga-Moschi line in German East Africa captured by British during 1916 was presented to Lahore post office by Major General Sir H Ewart in recognition of the services rendered by postal officials of this circle to East African Expeditionary Force.”

It is truly wonderful how a small box can carry so much history.

After spending some time at the railway station it was time for me to continue my journey towards the town. Once I reached the town – after making a quick stop at a dhaba for a cup of tea – I immediately headed towards the sufi shrine which, as I came to know later, is one of the main attractions for most of the people who visit Islamabad from all over the country. After going through regular security checks, I entered a corridor filled with doors. At one corner there were pilgrims gathered to get their share of free juice, a very common sight at sufi shrines.

A place crowded with people at all times, the shrine consists mainly of a beautiful tomb made of pristine white marble. Many followers lay floral wreaths on graves of sufi adepts as a way of paying their respects. It houses a number of graves of sufis belonging to the Chishti order. The most famous among them is Pir Mehr Ali Shah who passed away in 1937. Buried alongside him is his grandson, Pir Naseeruddin Naseer, a famous Urdu poet, who died in 2009. The shrine also has a large hall for the pilgrims to sit and rest. Next to the tomb there is a beautiful water pond.

Once I got done with my tour of the shrine I visited a market with shops selling rose garlands, wreaths, sweets and a huge collection of sufi poetry books.

Next time you find yourself in Islamabad and are looking for a holistic experience of the city, Golra is the perfect place to visit. There, you will encounter both history and mysticism. For a tourist, not many experiences can top that.

The writer is a freelance graphic designer. He tweets @Ehteysham1 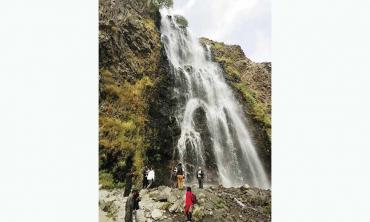 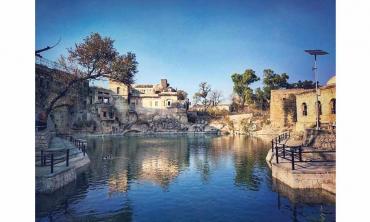 A step back in time 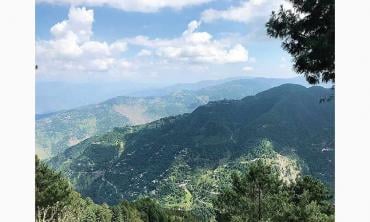