Nothing wrong with the law?

Barrister Shahzad Akbar’s job is difficult. As prime minister’s special assistant on accountability, he has to often defend the indefensible. But what he stood up to defend the other day in Senate defied common sense. In attempting to reject the opposition’s claims of human rights violations by the National Accountability Bureau (NAB), he said the people who have died during the NAB investigation did not die in NAB custody; they either died during judicial custody or committed suicides at home; in the rare two cases of people dying in NAB lockup, he said, there were no allegations of torture.

Did he miss the point or was he seriously thinking that others would?

He flaunted the recovery of money — 141 and 389 billion rupees for 2019 and 2020 — out of the ‘corrupt’ as the singular achievement of the NAB, implying that as long as the Bureau is successful in doing its job, nothing else matters, least of all human rights. He also selectively cited odd higher court judgments to show that there is nothing wrong in the law. He quoted worse examples of accountability mechanisms from other countries in the world to make Pakistan’s look better.

His job is indeed difficult. The fact of the matter is that the NAB law is not just bad, it is terrible in its scope, spirit and application. It is an impossible task to pick sections of the law that violate human rights because that implies that, minus those sections, the law is okay. The problem is that the entire edifice of the NAB law stands on those specific provisions.

The constitution holds that laws that come in clash with fundamental rights will be declared void. But here is one that tinkers with the right to fair trial and due process, right to dignity, freedom of movement, privacy, and freedom to do trade and business. It violates the constitutional safeguards against arrest and detention, and against retrospective punishment. It is draconian in scope because it makes exceptions — by keeping people in investigative custody for up to 90 days, by not granting them the right of statutory bail, by reversing the burden of proof and giving them stricter sentences. It even exempts serving military officers from its purview.

But all of this has been extensively written about, in newspaper and research articles. And yet nothing moves. This is because the political and historical context to the law compromises its neutrality. Put into effect by a military dictator, the intention was always suspect; it was seen as part of the political engineering project that has continued since the country came into being.

It is because of this context that things happen outside the law that no one claims responsibility for: the sense of harassment for the accused that no outsider gets to see or experience; photographs of the accused leaked to the media, stripping them of all dignity; the accused handcuffed and paraded before the media; a video comes out where no less than the NAB chairman is heard saying what he should never have said, to the wife of an accused person, but he stays on the job. That’s how opaque our National Accountability Bureau is. Note that the chairman enjoys immense discretionary powers as per the law, with literally no one to hold him accountable.

The law is bad for sure. Apart from all of the things cited above, the ideas of plea bargain and making the co-accused approvers have been a subject of critical scrutiny the world over. The law needs critical reform. Or it could just be thrown out of the window once and for all, and not only because of its partisan perception — of being a tool of political victimisation. In fact, there’s a strong argument in favour of the latter which holds that we don’t need a separate accountability law; the existing anti-corruption laws need to be made more effective and implemented.

There’s an even stronger argument that says this is not the best way to deal with corruption. It is not wise to detain people after the deed, recover a part of the money and call it success. It is better instead to preempt corruption; to have mechanisms, policies and laws that discourage and minimise corruption.

One would have thought the Pakistan Tehreek-i-Insaf-led government had a blueprint to accomplish that instead of relying on an imperfect accountability instrument that lacks credibility. One would have thought the opposition had a clear plan to offer to the government — to sit together and bring more parliamentary oversight to the accountability process. If the PPP and the PML-N had indeed proved to be ‘a bunch of thieves’ in their time, with representation of all parties in the parliament, now is the chance to rectify that sense.

The collective wisdom of the parliament can, hopefully, come up with a fair answer to Pakistan’s corruption question that does not violate anyone’s human and fundamental rights.

The writer is a senior journalist and the director of HRCP.

Nothing wrong with the law? 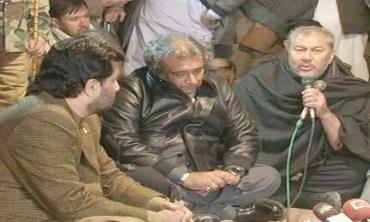