The opportunity to watch an exhibition in person is becoming harder to come by due to the second wave of Covid-19 that is gradually reducing public interaction and social gatherings in Islamabad.

However, Santrang Gallery hosted an exhibition at Serena Hotel where 20 miniature paintings were on display by Rahim Baloch.

One noticed a deep understanding of grief and loss in these paintings. The miniatures were exquisitely balanced in colour composition, rendering of brushstrokes and structure. A different story was told in each of these seemingly calm blue paintings. The details were almost invisible from a distance but came into focus as one approached so that one could see each single strand of hair on the honeybee, petals on the jasmine flowers and dandelions, and kneeling figures. It was only once one walked up to these pictures that a story revealed itself.

Baloch graduated in 2014 having studied miniature at the National College of Arts, Lahore. His works are primarily gouache on wasli ranging from medium to large and life size scale. The rendition of brushstrokes and naturalistic turquoise and earthy hues feel lightweight, the line work is delicately placed together. As a result, there is a wave of movement. On closer examination one became aware of the precise structure of the composition, the heavy opacity and weight carried by each individual mark made by the artist. Only gradually do the suspense, dread and the sense of threat hidden in the calming mandalas, wreaths and sensual nebulae become apparent. The viewer then starts feeling that the honeybees and
jasmine flowers are in some kind of a dialogue. The circulating helicopters, war planes and guns might be a small detail but their presence is undeniable. The sphere now appears to be a sniper scope.

Playing with the foreground and background perspective, contrasting life size and the sub-atomic, Baloch has depicted his emotions on difficult subjects. We are pulled into the psyche of the artist who has documented his experiences. The silent and perfectly uniform beehive is gilded with gold highlights looming behind his subjects like a cage. In the painting, The Droplets, an intense moment is captured where the honeybee is in flight. It is being chased by un-alarming foliage and flowers. The honeybees are perhaps portraits as seen in The Garden Blemished. There is a vastness of depth that could be a kind of purgatory with a few souls hanging in limbo. The dandelions used as clouds in the painting, Transcendence, almost feel alive. There are silvery strokes of lines in motion moving the clouds away from a light source.

One sees a meditative practice of patience and endurance. The works are meticulously hand painted and their large muralistic scale is a labour of love. While there is a lot of pain in his work there are also hopeful depictions such as Longing For Peace that have a bed of jasmine flowers nestled at the bottom half of the painting gazing up at a honeybee draped in ghostly white mist of lines. Like a force-field made of time and memories, the honeybee is at the centre of a translucent cloud. In the painting, A Black Scene, there are helicopters, guns and planes indicating an invasion, the bleeding moon in the background dividing the picture plane shows a scene of combat.

The artist appears to be telling stories as a way to heal and recover from a past. The therapeutic process appears to have given him a window into a calm he has aspired for. 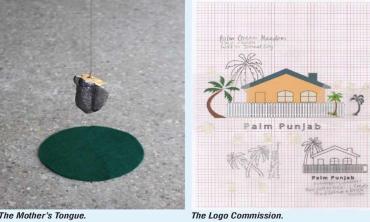 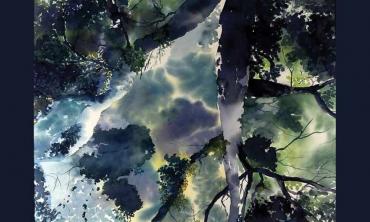 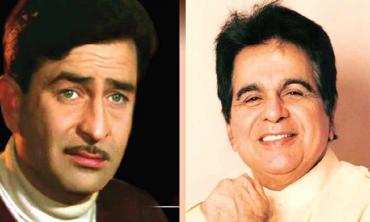