“It is my daughter’s rukhsati (wedding) today (Wednesday). My joy knows no bounds. My conscience is clear. I’ve done something to deserve this blessed day,” says Raja Zahoor, a local leader of Tehreek-i-Labbaik Pakistan (TLP) from Rawalpindi.

The good deed he is referring to is his participation in a protest rally followed by a sit-in at Faizabad to demand that the French ambassador be kicked out from Islamabad and all ties with France be severed.

“Protest rallies have been carried out since the publication of blasphemous caricatures in a section of French media. We’ve facilitated all such protest rallies,” Ahsan Younas, the Rawalpindi city police officer (CPO), tells The News on Sunday.

This is not limited to Rawalpindi or to the country; a protest has also been lodged with France, says Ali Furqan, a Voice of America (VoA) correspondent. He mentions that a resolution has been tabled in the National Assembly (NA) asking the government to lodge a protest at the highest level. He says the deputy speaker has made a ‘ruling’
for the removal of the French envoy.

He recalls that Prime Minister Imran Khan spoke at length on Islamophobia at the United Nations General Assembly and has been quick to condemn the French president for backing the caricatures.

TLP leader Khadim Rizvi gave the call for a protest demonstration at Faizabad the site of a sit-in by the party three years ago that paralysed life in the twin cities for three weeks.

Faizabad is the main intersection connecting Islamabad with Rawalpindi.

“We were at work two weeks ahead of this rally. We contacted the shrine managers and seminary leaders and told them that there was no need for the agitation. They agreed with us and promised not to participate in the activity,” say CPO Younas. “It was a major success,” he claims.

“We held many rounds of talks with the TLP as well. We offered to let them hold a gathering in Liaqat Bagh and take out a rally from Liaqat Bagh to Kutchery Chowk or even Madrassa Faizul Islam, the Rawalpindi side of the Faizabad intersection. You know Kutchery Chowk is key to the city. We wanted to stop them from going to Islamabad. They didn’t agree,” he says.
Sheraz Ahmed Farooqi, a former TLP coordinator in Islamabad, says that despite the fact that he disagreed with many of the policies of the party, participation in the protest was a “matter of faith”.

On the use of social media for mass mobilisation, Zahoor says that Facebook had removed his account after he posted contact numbers to guide the public about the protest.

“Thousands of the faithful came from all parts of the country, including KP and Sindh. We didn’t mind harsh weather or police shelling,” he says.

Raja Zahoor says, “in the cold night, and during the rainy day that we spent at Faizabad, we warmed up when we recited durood.”

Announcements were made from police vans on Murree Road on Sunday that shops shall be closed and mobile service shall remain suspended on account of the TLP procession.

Till Monday evening, the people of the twin cities remained cut off from the rest of the country as telecom services were shut. Those living along the main road of the garrison city were exposed to a heavy dose of teargas when TLP workers clashed with the police.

It took the TLP men 11 hours to reach Faizabad from Liaqat Bagh. 53 policemen were hospitalized with injuries sustained in the clashes. The number of injured TLP workers could not be ascertained. Zia Bajwa, the Islamabad Police’s PRO, said four Islamabad police officials were also injured in the clashes. He said Amir Zulfiqar, the IG, led the operation from the front and remained on the site for 24 hours.

A leading TV anchor tweeted that the number of TLP workers was between 12,000 and 14,000. The figure was picked up and reported by international media as well. However, it has been contested by the authorities.

“Had there been 12,000 people, they would never have gone back. The actual number was less than 2,000,” says CPO Younas. He says the police had arrested more than 400 of them.

He says the administration of the twin cities is capable of handling a 5,000-strong crowd.

The TLP concluded its protest on Monday night with a handwritten agreement with government representatives. It said the French envoy will be expelled and the arrested TLP workers would be released.

Raja Zahoor says that the arrests were made before the protest. He says his house was also raided.

“Those arrested have been released. The police were tough on us on the street; but in custody, TLP members were treated with reverence,” he says.

On the use of social media for mass mobilisation, Zahoor says that Facebook had removed his account after he had posted contact numbers to guide the public about the protest. He says this had happened to many other TLP workers as well. Besides social media, he says, they had relied on mosques to organise the crowds, he says, adding that “it is faith that eventually draws people to TLP”. On taking Covid-19 precautions during the procession, Zahoor says that the “virus cannot survive the durood”. 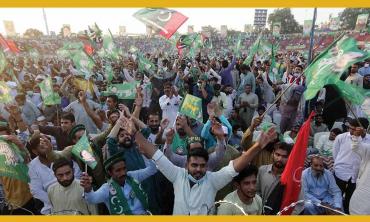