Silver Lining, on show at Satrang Gallery, Islamabad, featured an eclectic selection of works by Rahim Baloch in a diversity of media, from large-scale paintings on wasli to an installation. As one of the more rigorous exhibitions within the gamut of post-Covid-19 programmes, Silver Lining presented some challenging works that thoughtfully delve into a range of issues surrounding the complexity of human/animal relationships. The exhibition covers a broad thematic that includes domestication of honey bees, environmental degradation, and species extinction. While the breadth of the exhibition is not its strength, it does provide a prescient opportunity to engage with some familiar and unfamiliar concerns in a context of wider debates about animal rights and ecology.

While many of the works provide insightful and creative ways of thinking about insects, particularly bees, in some the bees sit too comfortably within an historical trajectory that has anthropomorphised and sentimentalised insects. For artists seeking to make work about animals, which moves beyond an androcentric view of the world, the challenge is to think about human/animal/environmental relations in terms that, as English academic Steve Baker suggests, “acknowledge the animal’s own living otherness from humans and let this otherness speak for itself in the work that they produce”. In doing so we must also acknowledge “that animals and humans are dependent on each other in increasingly complex ways”. Such a challenge demands a radical rethinking of not only how we understand animals but also how we value human identity.

Rahim Baloch’s primary interest has been the physical and aesthetic fragility of the biodiverse world and its specific ecological systems: the resilience of nature to overcome catastrophe or transform itself through cataclysmic events, the convergences between human beings and other species and the imposition of culture on nature.

In what can be regarded as his most inspired project, Baloch has depicted various honeybees with an extraordinary realism and compassion that he probably hopes would be, for posterity, a touchstone for the inviolable relationship of human beings to the organic universe. Baloch’s Silver Lining asserts the potential and ideal of life forms living in harmony with the earth from which they rise. The artist has maintained a small menagerie of honeybees, for close observation and to inspire representation of the natural world: the inner essence of beings as well as their external manifestation.

The external manifestation of Baloch’s insects is alternatively serene and spectacular. The optical illusion of camouflage, the deceptive and declarative spray of colour, or the bathing of habitat in an otherworldly light – are his acknowledgment of elevation of natural life forms from a mundane to an extraordinary reality.

Rahim Baloch offers a memorable, witty pairing of antiquated visual style and contemporary decadence. His influences are legion. He is as deft in referencing the hyperbolic, primitive look of turn-of-the-century miniaturist as he is in contemporary folk art. In his work, however, the adorable tends to win out over the grotesque as whimsy and fanciful decoration collides with a more twenty-first century brand of sensual naughtiness. Many of Baloch’s paintings evoke theatrical tableaux, with decorative elements framing the main action and characters while objects are arrayed as if with an audience in mind. Those arrangements, and their acknowledgment of an invisible audience, lend a lovely winking wit to the work. Subjects – whether bees or flowers or warplanes – pass through the cabinet of curiosities frame in a narrative promenade, a parade of earthly and unearthly delights.

The act of masquerade is one of Baloch’s favourite motifs. The bee appears as a symbol of countless deaths and destruction caused by wars and terror attacks that kill the innocent. Through pattern-making, repetition, balance and symmetry, the artist has tried to convey growth, progression and multiplicity.

Conversely, the artist sees himself as a mystic struggling to unravel the truth of his times. The honey bees gathering nectar from brittle dandelions, following the ecosystem, are harbingers of proliferation. The journey starts with vacuum and culminates in filling it. The seed that develops the tuft of ‘hair’ floats through the surface into vacuous space forming cloud-like patterns. The blooming flowers, blissfully or mysteriously, detached from the real world by their fantastic otherness perform a chorus line, promenading and dancing alongside more conventional sea life in a style that suggests the allure of ethereal space. That altered state only adds to the air of enchantment to the work. An air of fecund abundance and sumptuousness of nature characterize the work set against a laser-cut honeycomb that fills the entire surface as a background. The honeycomb is a complex piece of architecture and an intricately woven sanctuary. Thousands of hexagons are used for building the comb with its narrow entrances hanging loosely in space.

Baloch favours a vocabulary of cantaloupe, magenta, ultramarine, and vascular purple combined with a wash of colour that can suggest either twilight or night. A sense of ravenous possibility also reigns in confectionary, pastel tinted flowers covered in silver leaf, collaged in either ovals or circles within which the bees cavort. Rahim’s nocturnal environment casts his glittering, ink black night as a distinct place of change, of the unknown, of becoming. This environment and its inhabitants hover in a space that is in between the real and the imaginary. In his 1926 poem Spaces Inside Sleep, Surrealist poet Robert Desnos conjures a vision of night that adds to the allusive density of Baloch’s environments and the disconcerting, enigmatic way in which the reality of their stasis is held at bay by their quiet, mischievous yet plaintive suggestion of animation. Occasionally, Baloch’s abundant, celebratory lyricism turns melancholy, as in the feverish, grim, but also hyper-imaginative The Garden Blemished, in which the honeybees seem to conjure up their grim fate circled by war planes and helicopters. It is a beautifully realised punctuation on an otherwise delightful imagery.

The Hopi Indian word koyaanisqatsi encompasses an essence or a state of being. Hopi cosmology perceives the present to be the manifestation of the Fourth World. At the beginning of time seven worlds were created. The first three worlds were each destroyed due to the divergence of human beings from an ordained, sacred path that connected them to concepts and practices of love and respect for all life on Earth. Hopi prophecies describe the potential destruction of the Fourth World:

“If we dig precious things from the land, we will invite disaster.

Near the Day of Purification, there will be cobwebs

spun back and forth in the sky.”

The writer is an art critic based in    Islamabad 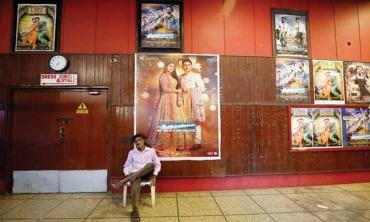 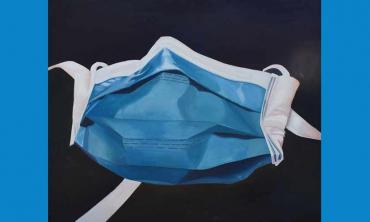 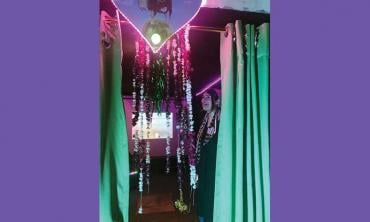