There is a growing tradition of Sufi/spiritual music in the contemporary music scene. It doesn’t belong to the once-formidable Junoon anymore, who were known for creating a blend of Sufi rock.

The distinction lies in how each of the aforementioned acts has approached this tradition; with deference while letting the music be as defiant and abiding as possible. In other words, with a degree of respect and musical landscape(s) that has lasting merit.

So, it isn’t surprising that when Dhool appeared on Pepsi Battle of the Bands (PBOTB), they also carried a Sufi vision. It was obvious in their performance of a song called ‘Nukta’ in PBOTB’s third season in 2018; the judges didn’t deem the band fit enough to go past the initial episode (possibly due to Xarb’s presence who have, ironically enough, broken up). Dhool didn’t cut it beyond episode one but the song was something else.

Though Dhool has been around for more than half a decade, even their one-song appearance on the series allowed them to cognizance themselves to the country through a national platform.

Visaal-e-Yaar Qalandar, their 2020 EP is a cleaner extension and expansion of that one song, ‘Nukta’ that was presented as a condensed re-composition of a kalaam by Baba Bulleh Shah.

Dhool consists of Daniyal Aslam, Usama Nasir, Hammad Khalid, Mobeen Inam and Tahawar Ali. On this EP, the group has also featured guest musicians such as Waleed Mazhar of the group 21 on certain songs.

Their 2020 EP has been released by Rearts Records, home to acts such as Natasha Humera Ejaz, Wooly and the Uke, Bayaan, Kashmir, The Sketches, Mughal-e-Funk, Tamaasha, Naseer & Shahab, Shezz and Wisdom Salad, among other names.

Ways of Being Sufi

Visaal-e-Yaar Qalandar is a hemisphere of songs that are a blend of iconic Sufi as well as poetic verses; it combines them with Dhool’s mix of alt-rock music. Never too boisterous, the sonic landscape is an aberration in the sense that it has made no effort to copy from other acts that fall within the same genre of music.

To put music to these writings, written by iconic names and sung by legends originally as well as having heard them on the super-popular Coke Studio means their exposure level is extremely high across demographics. Thus, taking these set of lyrics by poets and Sufi saints and making music to go with it was always going to be a challenging task.

Dhool, however, have done well, for the most part. It makes you wonder why this band never made the cut beyond the original performance on PBOTB.

‘Nukta’ opens the EP with an extended version that was not heard on PBOTB. A subtle opening that features soft acoustic guitars makes room for the lead guitars as the vocals come in. As the singer opens the track with the words, “Allah Hoo” with his heavy, textured voice, it is obvious that this is a masterful mixture. The voice complements the words. Soon enough, ‘Nukta’ goes in the next gear. The song has solid transitions so you don’t get bored in an audio sense. At the same time, the spiritual song doesn’t show-off with sharp guitars and almost feels like it’s maybe going in another trajectory until you hit 1 minutes and 16 seconds and ‘Nukta’ - the rejected track by PBOTB – takes over. “Ek Nuktay Vich Gul Muk Di Ay” and the Punjabi song talks of having clean, compassionate hearts and much more. It’s a strong opening.

‘Qalandar’ – with lyrics by vocalist Daniyal Aslam - opens with a darker vibe, leaving you with an ominous feeling before the band quickly takes over with hardcore rock elements stepping in with grungy riffs while still letting the song be ominous in spirit. This is where the band goes rambunctious but each instrument comes in at the right time. The track, ‘Qalandar’, as Dhool note, is a “picture of a person’s mental state in which he is going through a thought process to find a way out from conventional ways of finding his creator and finds a new way to do so.”

And as you focus on the lyrics, you find that they capture that aim in essence.

‘Aaghaz’ is loud in tone, imparting wisdom via its lyrics and the band goes full steam ahead as a rock act on this one. Through the songs, they address social dogmas at a time when the country is facing myopic views. And in that lies their success.

‘Mann Kunto Maula’, perhaps the most well-known track in the EP, is musically right on the money. It opens like a dream with a string instrument (sitar?) and the transition appears just a little after 1 minute but the rendition itself may or may not blow you away since it has been attempted by several acts.

Other songs like ‘Hum Dekhenge’ also pose a similar challenge. Even though Dhool’s rendition is actually better than the Coke Studio 11 version and has grit, some songs tend to be sacred and this revolutionary song – despite its poignant treatment - doesn’t necessarily fit in this Sufi album. It also struggles with the same issue as ‘Mann Kunto Maula’.

The EP, produced by Shahab Khan and Waqas Naeem, does a good job in essentially creating an identity and narrative of and for the band.

But, given the covers songs Dhool has attempted, it also takes away from the EP. It would be great to see Dhool challenge themselves as well as listeners with Sufi material that is not so commonly and commercially covered and by finding more obscure Sufi material writing as well as completely original songs. They have the talent. 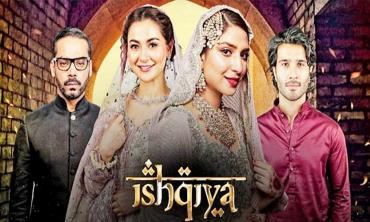 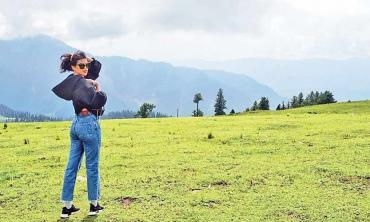 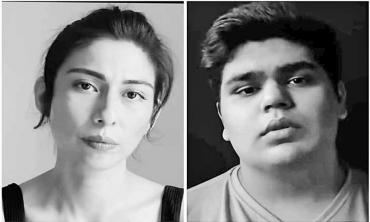 Abdullah Siddiqui and Meesha Shafi come together for ‘Magenta Cyan’