Umar Hayat Palace in Chiniot is a majestic architectural masterpiece, slowly withering away in the merciless throes of time

The first thing that comes to mind whenever Chiniot is mentioned is the skillful and artistic woodwork associated with the city. Chiniot is located around 40 kilometres from Punjab’s second most populous city and one of the business hubs of Pakistan, Faisalabad. The exquisite craftsmanship of its carpenters and the high quality of the wood used by them is what sets the city apart.

Many people from towns as far as Rawalpindi and Islamabad visit Chiniot when they want to redecorate their homes, purchase furniture or buy a gift. It is almost impossible for one not to fall in love with the products exhibited at the shops in Chiniot.

Chiniot is also home to a historical and architectural gem. Only a few visitors to the city get to see it despite its screaming red-brick exterior in an otherwise humble neighbourhood.

The magnificent Umar Hayat Palace, previously known as Gulzar Manzil and now as Umar Hayat Library, is anything but a prominent landmark. It has every right to be considered as an architectural icon of the city.

This unique, five-storey wooden mansion was constructed in the 1930s on the orders of one of the wealthiest traders of Chiniot, Sheikh Umar Hayat. Sheikh Umar Hayat who is believed to have left Chiniot in the late 1890s decided to move back to Chiniot in1920. He then ordered and assigned Syed Hasan Shah to supervise the construction of a magnificent edifice. Shah roped in some of the best craftsmen of the era including Ustad Illahi Bux Pirjah and Raheem Bux Pirjah whose skilful artistic work earned them assignments even in the Buckingham Palace.

Those hired to be a part of the construction included Ahmed Din, Niaz Ahmed Jalundhri, Ghulam Muhammad Jalundhri, Jaan Muhammad and Ghulam Mohiyuddin, all renowned for their exquisite brickwork, stucco work and frescoe paintings. It took an investment of Rs 400,000 (some claim it was Rs 200,000) and almost a decade to complete this masterpiece. It was later proclaimed to be a ‘local wonder of Chiniot’ by British authors in the District Gazetteer of Jhang.

Sadly, Umar Hayat died shortly after its completion. However later, his son Gulzar wrapped up his father’s business in Calcutta and returned to Chiniot with his mother. A huge wedding took place in the mansion in 1937. The very next day Gulzar was mysteriously found dead in his bathroom, due probably to accumulation of exhaust gases from geysers. His mother couldn’t bear the loss and also passed away soon after. Both of them were buried in the courtyard of the building. The building was then dubbed unlucky and no one came forward to claim it. It was abandoned and no one took care of it for decades. The building was, however, later occupied by various groups including a religious school and an orphanage.

Frescoes and stucco work from two upper floors of the building were torn and smuggled to other areas of Pakistan and abroad. Parts of it were incorporated by various traders in their products. These two floors were officially demolished in the 1970s to prevent the entire building from collapsing. Removal of the third storey followed in 1990s.

It was only in 1989-90 that the defacement of the beautiful interior was halted by authorities and restoration of the remaining building began. The building was eventually converted into Umar Hayat Library, Museum and Cultural Centre. The action brought about some respite for the building. Lack of political will and funds for maintenance resulted in the building getting neglected again. Currently, the upper floors are in a very poor state, although the interior is still well-maintained.

The attention to detail in the carving and inlay (munabat kari) on every inch of the construction speaks volumes of the artistic skill of the craftsmen who constructed this magnificent building. The appealing designs on the panels, windows and doors, exquisite artwork on the ceiling, the stucco work and the frescoes, the royal balconies, the elegant marble work and the stairways combine to leave the viewer awestruck.

It is advisable to visit the Umar Hayat Palace in the morning to ensure maximum visibility. There is no ticket to visit the place since it has been given the status of a library. One hardly comes across a visitor or a reading public. The books on the locked shelves have gathered enough dust to tell their own story.

The writer is a physician, healthcare leader and a traveller. He tweets @Ali_Shahid82 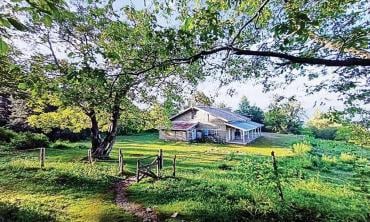