A reluctant adventurer recounts his contentment

I was at a crossroads and I chose the well-trodden path. Robert Frost might have chosen otherwise, if he did not know, like me, that both led to the same ruins of a bungalow.

I had been walking since dawn, when I turned a corner and found myself facing a fifteen centuries old tree. It took me a while to absorb its immense presence. It was not an ordinary tree. It had been witness to over half a million sunsets. It might modestly admit that it had seen nothing but snow, air, and sunlight. And it might offer no help in answering the questions involving human predicaments. But I was not asking any. Its mere existence was marvelous. It was there when the Roman Empire was taking its last breaths. It was there before Islam changed the landscape of Asia. It was to see this tree, to be able to put in context the history of human toil for well over a millennium, that I had walked all the way.

A mountain always hides its true magnificence from the climbers. It lets them underestimate its sheer mass. But when clouds wrap themselves around its torso and only the summit is visible, the peak seems closer to the sky than to the earth. This is also what this tree was like.

I walked on, hoping to drink spring water at the bungalow. The weather was mild but humid, this being a mid-July day. The sun had started climbing down from its noon-time zenith. I reached the doorway and found it without a sill. The ground was matted with fallen leaves, decaying and wet, that nevertheless, made the walk easy on the joints.

Having apprised myself of the general layout of the premises, I went inside the building. It looked like it could crumble any moment. I walked out and noticed that Abbottabad was visible down below. It had been a beautiful summer home. There were wooden servant quarters, still suitable for a night’s stay. Hundreds of names and quotes were carved or written on the walls - a vulgar expression of the visitors’ wish to be remembered by strangers.

The roof had collapsed in an earthquake, the north wall had a big hole where it met the ceiling. The mortar that had once held the bricks was decaying. The gable had rusted. Termites had eaten into the wooden structure between the crumbling stone framework and the roof.

I took a mat out of my backpack and spread it in the shade of an oak tree in the lawn. I felt strange bathing in sunlight at the peak of the summer season, but this is the allure of the hilly stations. With only a few close friends for company, I had walked 30 kilometres from Thandiani, the second highest peak in the Galiyat area, and this was our reward. It was just a stopping point for the night. The next day we had to head to Miranjani, the highest peak in the valley. We had all the time in the world to sit in the shade of a humongous tree and listen to the croak of the ravens. After a while, I could discern the sounds of various ravens’ vices in the trees and how they responded to one another’s caws.

I heard footsteps and, squinting my eyes, looked towards the main door. Two men were coming towards us. I got up to meet them halfway and greeted them. One of them was Yusuf, the caretaker of the Bangla, a tall fellow in early fifties with broad wrists and strong teeth. The other, Saleem, had a short build and was a forager and shepherd by vocation. I asked them to join us on our mat and I introduced my company. Yusuf proved a story teller. He told us tales of his wrangling in Lahore and how he was rescued from behind the bars because of his influential connections. Ali and Usama, always fond of conversations that do not involve too much philosophizing, were happy to listen to Yusuf. Meanwhile, the temperature was dropping as the sun moved west. We took our leave from Yusuf and Saleem and returned to our huts. We planned to depart early the next day and slept through the night, huddled together in a small cabin.

The next morning, I went alone to look at the Bangla. The sky was bright, but the sun was still behind the eastern hills. The forest echoed with the chatter of birds and insects. However, I am not even remotely knowledgeable about the various species of birds that live in a forest. Seeing an unfamiliar bird evokes a momentary curiosity in me but that is the end of it. I do not have an academic’s lens for the nature. I am also not aware of the herbs one can eat if one gets lost in the forest. I look at the creatures in a forest like artifacts lying on museum shelves without a note. I do not seek to study their genetic lineage or potential culinary uses. I leave them as I find them.

I stood in front of the building, looking at its frame. The roof had collapsed fifteen years ago when an earthquake rattled northern Pakistan. The north wall had a big hole where it met the ceiling. It was neither livable nor restorable. The windows had wooden panels nailed on them after the glass panes had shattered. The mortar that had once held the bricks was decaying. The gable had rusted. Termites had eaten into the wooden structure between the crumbling stone framework and the roof. Had the ceiling been a little more substantial, it would probably have crashed. Still, it was not scary. It had aged gracefully and weathered seismic shocks with grit. It still could stir a fantasy in a traveler’s heart to live here, albeit for only a few days. One stood far from civilization, but it was not out of sight. One could can always look towards Abbottabad and remind oneself that being alone was not being lonely. I felt deep envy for people who had stayed at the Bangla in its days of full glory.

I came back to my cabin and woke up my companions. There was nothing unexpected or out of the ordinary. After eating our breakfast and ensuring that everybody had enough water in their backpacks, we decided to leave for Miranjani. A few hundred metres into the walk, we came upon a crossroads. For a moment, I thought of picking the less-travelled trail, but in the woods, the well-trodden path is always the right path.

The writer, a medical  doctor by profession, is an occasional mountaineer. He can be reached at   [email protected] 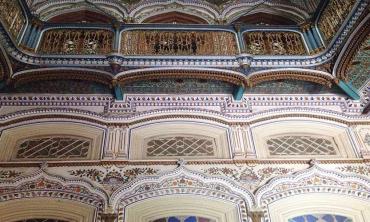