Get ready, hunker down for the big sleep. The herbs of our garden are preparing for the onslaught of the Punjab summer’s blistering heat that will extend to monsoon if it is cool but could also go on till September.

Herbs and food growing in our gardens are not just a current fashion – a reaction to the belated discovery that pesticides and pollutants enter our food chain through contaminated soil and water. They have been part of our gardens for centuries. We just went into collective garden amnesia during colonial rule – well, at least those of us who fell prey to the colonization of our minds during that century or two.

It is sometimes surmised that Harrapan cities had herb gardens, although we have little evidence provided by archeologists. Such soft things just disappear into the mists of time.

Just go into the koochas of the Walled City of Lahore, into the mohallas of Icchra, the bungalows of Gulberg or the farmhouses of Bedian Road, and you will find ropey strands of garlic, feathery leaves of coriander, spokes of aloe and charming little bushes of green chili flowering in May.

Sometimes in decapitated PET bottles, sometimes in old tires or even in old water ghaarhas and matkas, you will see women tending them on balconies, behind kitchens and near laundry haus or sunken washing areas. Various people bend over these herbs, mostly women or girls, the elderly, or even disabled members of families. It is an act of tenderness and tending, of giving mindful care, and of receiving reward and refreshment in return. In these acts, a modicum of private peace is welcomed into our daily lives.

As a plant scientist, I cooked up a scheme as my children grew, a secret plan that bore abundant fruit. To help urban children understand food and the art of its growing, I planted the terrace of our early marriage, and garden of later married life, with a scintillating variety of herbs, vegetables and fruit. Then proceeded to ignore the children as I spent hours available after and during work routines showering them with love, concern and tending – I mean the plants, not the children.

Like curious kittens, the children came meandering after me. Initially trailing behind, then noticing they had the best of my listening ear while I garden, later focusing on the plants being tended, and finally venturing to enquire, observe and use the edible plants themselves. Now, after a couple of decades, as I watch from my window, a harvesting party or a lone individual is daily to be seen in our urban garden.

The cook collects a daily fare from my plant beds, sometimes squatting down on her haunches to gather the juicy leaves of Sicilian arugula for salad, sometimes cutting heads of broccoli for soup, sometimes harvesting mustard leaves or sarsoan for her favorite desi winter dish of saag. Nowadays, in the sharp sunshine, she collects cooling mint, silvery thyme, and flat-leaved parsley. Oh yes! the weed known as bathuu is also a favorite inclusion in our chappatis.

Sneak peeks followed by chuckles erupted when I first spied our younger daughter at about age 10 years, unaware of being observed in our garden. Inside ten feet high teepees of bamboo plant supports, she was lost in her own world as she plucked ripe sugar snaps by reaching over her head with small arms. She didn’t know that it was her mother’s bait, planted there to invite her into the magical world of growing and eating plant food. Now, whenever I know that she will be home for spring, I plant sugar snaps, the peas that can be eaten whole without shelling, making a delectable, crunchy, sweet green treat you can just eat straight from the plant. No washing needed, because your mother’s garden is free from chemicals, and she’s always told you a little bit of dirt in the mouth won’t hurt.

It has not always been easy to grow these edible plants without chemicals – and I have to admit to struggling with the temptation to reach for a bottle of poison to zap pests out of existence. You cannot imagine the furor when our beloved fig tree was discovered to have a borer insect mining tunnels into its main trunk.

Or when beautiful Roma tomatoes ripen just prior to plucking and rot overnight with tomato blight. Or when, in the dead of night, a garden shrew, or chachuoondar, simply guillotines your 12-foot passion fruit creeper clean off its main stem. That is when one must bend one’s head and submit to the vicissitudes of nature, accepting that these tiny forces are bigger than you. Next morning, you must go and remove the dead plants, and fill the borer tunnels with mud and lime, hoping that the tree will heal and survive.

And now, it is time to put the garden to sleep for the long summer. Softly and kindly, our beds are covered with cooling and comforting mulch. Two to three inches of cut grass requested from the neighbor’s spray-free lawn is spread on the soil and left to dry over the summer months. The earth rests during the severe heat, as earthworms and soils microbes bring it back to health under the mulch, ready for the autumn when Lahore gardens will prepare to give us the next cornucopia of good food. 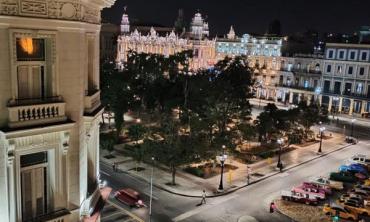