On the wrong track

From being the undisputed T20I champions, Pakistan have reduced themselves to the role of mere punching bags in the game’s shortest format 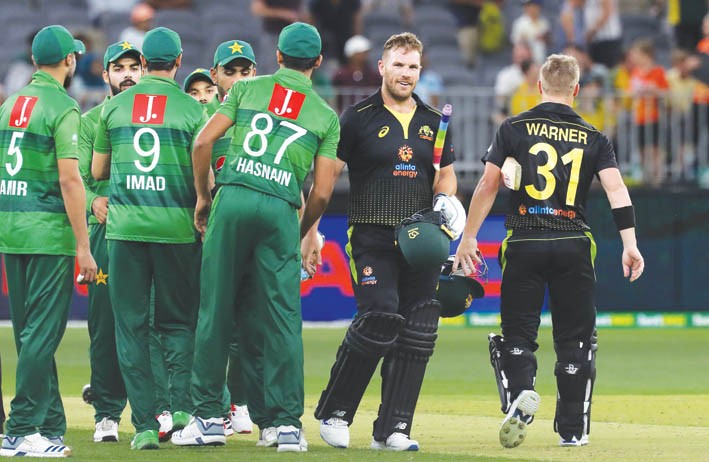 There was enough bound and pace in Perth for Australia to just ride roughshod over Pakistan in the third and final Twenty20 International last Friday.

Australia’s authoritative ten-wicket triumph gave them a 2-0 series victory and brought them within striking distance of clinching the World No.1 spot in T20I rankings. Though Pakistan continue to claim that title, it’s become quite obvious now that they don’t deserve it.

A very narrow difference on the International Cricket Council (ICC) computer separates the two sides but in reality there is already a huge gulf between them. While Australia have risen like the proverbial phoenix, Pakistan continue to sink towards rock bottom following a series of so-called rebuilding measures taken by the Pakistan Cricket Board (PCB) in the aftermath of the team’s failure to reach the World Cup semifinals in England earlier this year.

The widening difference between Pakistan and Australia was visible in Sydney where rain rescued the visitors and was even clearer in Canberra. But even the most ardent of Pakistan’s critics must be surprised at the way the Pakistanis were thrashed by the Australians in Perth.

It must have been really embarrassing for Misbah-ul-Haq, the man who was handed near complete control of the Pakistan team in the dual role of head coach (also batting coach) and chief selector.

Misbah was given the command of a side that, till early last month, was supposed to be the undisputed No. 1 team in the fastest format of the game. Since Misbah took over, Pakistan have lost all of their last five completed T20 games which include a shocking 0-3 whitewash at the hands of a second string Sri Lanka team on home soil.

Till last November, Pakistan were at the top of their game, at least in the T20I format. On November 4 last year, they consolidated their No.1 ranking with a 3-0 series victory against New Zealand which culminated with a 47-run win against the Black Caps in Dubai. Back in 2017 and 2018, Pakistan was winning T20 games almost at will.

Now, with the ICC T20 World Cup less than a year away, Pakistan’s T20 plans seem to be in complete disarray.

So it is time to rethink Misbah’s role?

After all the former Pakistan captain was brought in the fray by PCB chiefs with the hope that he would put the national team on the right track. PCB’s decision to hand Misbah unprecedented authority despite the fact that he lacked experience both as a coach and selector ignited a lot of criticism from various quarters. But the fact that Misbah has had a knack for confounding his critics during his playing days helped his cause. His supporters believed that as head coach and chief selector, Misbah will manage to weave a similar sort of magic as he did during his tenure as one of Pakistan’s most successful Test captains.

It is still too early to reject Misbah as a failure but early signs aren’t looking good. His decision to recall Ahmed Shehzad and Umar Akmal — the bad boys of Pakistan cricket - for the home series against Sri Lanka was bound to backfire and it did.

The move to recall 37-year-old, injury-prone Mohammad Irfan for the tour of Australia didn’t work either. Misbah’s logic is that Irfan could be prove to be an asset for Pakistan at next year’s T20 World Cup on bouncy Australian wickets. But it’s not really wise to invest in an aging, half-fit paceman and a seasoned cricketer like Misbah should have known that.

Then there is the case of Sarfraz Ahmed. The former captain was instrumental in guiding Pakistan to the No.1 spot in T20I rankings. He took over the team from Shahid Afridi after the T20 World Cup debacle in India and turned an under-achieving side into a world-beating unit.

It’s true that as Test and ODI captain, Sarfraz wasn’t really delivering. But that wasn’t really the case when it came to the T20 format. His only glitch in the 20-over format was the defeat against Sri Lanka. But Sarfraz wasn’t the only culprit behind that loss. The entire team under-performed in Lahore. Misbah and the PCB, however, singled out Sarfraz as the reason behind Pakistan’s slump. One can smell a bit of personal disliking there.

I wouldn’t have talked about the Sarfraz issue had Misbah’s moves produced some sort of positive results. In fact I’ve been one of the few who have been supporting PCB’s leap of faith. But the way things are going, very soon Misbah will begin to lose the goodwill that helped him become one of the most powerful men in Pakistan cricket. Because in our country, one can be brought down from the pedestal really fast. Ask Sarfraz about it.

On the wrong track