‘Crossover’ exhibits the relationship between text, language, visuals and the meanings they hope to express 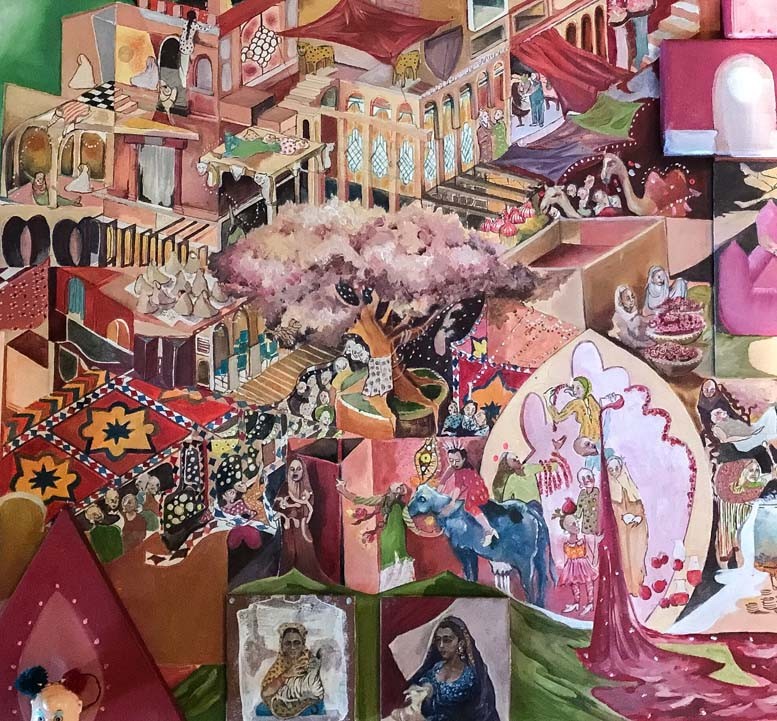 Chinese novelist Mo Yan’s name means ‘don’t speak’. The winner of the Nobel Prize in Literature 2012, may have adapted this pen-name both as a precaution or a reflection on the strict system of governance, severe surveillance and struggle for survival. But restrictions on freedom of expression are owed to both external and internal causes. In our context, the causes -- as recently witnessed in Karachi -- are often internal, since years of suppression have trained people to curb, camouflage or hide their opinions. This restriction will inadvertently cause them to experience a conflict within.

Such tension was visible in the work of Mohammad Ali Talpur at a recently concluded group exhibition titled ‘Crossover’. In the video installation by Talpur, you watch Pulp Fiction by Quentin Tarantino, without dialogue. There are sounds of things falling, gun fire, cars moving, doors opening and music, what’s missing is the human voice. Talpur transformed Tarantino’s best film, Pulp Fiction, into a new piece of art. For someone who knows the movie well, the initial agony of no human words soon turns ecstatic. One will either fill the blanks themselves, or thoroughly enjoy the visuals without voice.

I remember a friend commenting on Pulp Fiction when it was released, in 1994. According to him, it would only be allowed in Pakistani cinemas on mute due to a foul language. Here, Talpur may have stripped it of words, yet the movie is readable as visual text -- through sequence, action and setting.

A similar sensation of reading more than what is offered was available for viewers in the work of Zainab Saghir Barlas. A trained visual communication designer, Barlas created large-scale digital prints which, from a distance appeared as pieces of black and white calligraphy, but on closer inspection were not. Instead of words and letters, her works consisted of punctuation marks: brackets, slashes, dashes, dots, dividers, plural signs etc.

Thus the audience was forced to comprehend another language via familiar text. The layout of these symbols on paper -- in straight lines like the pages of a book -- reinforced the illusion of language.

Both Talpur and Barlas infused another dimension in our normal course of speech. Making us aware of the possibility beyond our comfort zone which is new, worthy and possible.

The works of these two artists amongst others were housed at Alhamra Art Gallery, Lahore from the 23rd to the 29th of October. Curated by Ali Raza, the theme was to create something beyond the limitations of one’s consciousness and recognised areas of visual production. Inviting painters, video and multimedia artists, photographers, architects, designers; noteworthy in their fields.

Some works in the show seemed like forms of inquiry, asking the ordinary viwer open-ended questions about expression and exploration, inevitably blurring the lines between them.

One realises that the line separating these similar-sounding terms is thin and from a distance invisible. Aarish Sardar’s multimedia installation ‘Extra(Ordinary)’ referred to these differences. Reading the term ‘extraordinary’ in light of situation and solution. Interestingly, this was one of only two works, along with Sana Waqar’s, in which text was used as the main describing motif. It is surprising because one thought that an exhibition where visual artists had the option to discard and disregard their practice, venturing into the unexpected, they would prefer text; but the reality was different. Perhaps it is because contemporary mainstream art, uses text so exhaustively, that given the opportunity they choose visuals instead.

Artists like Haider Ali Jan blended word and image. In his quixotical drawings, Jan employs Urdu and English expressions, alongside illustrations. Concocting a narrative lost in translation between the two, it invokes the name of God, private statements, personal messages and banal expressions. The text is taken from the compilation of Richard F Burton’s The book of thousand nights and one night. Due to the artist’s manner of literal appropriation, supporting some passages with hurried drawings, it seems like the memories of an ordinary mind rather than an acclaimed piece of literature.

Comparatively, Zain Naqvi and Dania Farooque used the language of popular culture instead to denote the realities of our time. Bridging the gaps between; personal and societal; formal and conceptual; high and low.

A similar approach was employed by Bibi Hajra, who assimilated popular expression with imagery. Her drawings depicted the celebrations across Pakistan celebrating Rabi-ul-awal 12, commemorating the birth of The Holy Prophet (peace be upon him). Hajra’s compositions combined devotional rituals with contemporary representations. Thus, if you see Buraq -- the flying horse associated with miraaj -- you also spot ceremonial tents, vivid in Pakistani memory, and the interiors of feminine spaces engaging with ritual. Reminding one of the format of The Thousand and One Nights, an Arabian literary classic.

The construction of Hajra’s work was the real intrigue; uniting two streaks of our cultural existence. According to her it is "a diorama that expresses the aspirations of women from the mohallah, drawing from their everyday lives, desires and identities as citizens". A kind of social documentation: "stories of community life; exploring how fantasies of consumption, modernity and belonging to a global city sit along religious identities". Simultaneously, the structure of her work allows a story to be told within a story. Multiple road ‘installations’ -- commonly called Pahari -- were transferred into the lives and aspirations of those who express their creativity through this public pictorial practice.

Hajra not only used the style of popular painters to execute these images, she also translated a three-dimensional arrangement to a two-dimensional medium. This and several other works from the exhibit show that crossing over is not a short journey, from personal to public. Rather a voyage that involves divides dealing with religion, gender, class, market and art.