Survival is perhaps the most universal human condition

Asad Faruqi’s directorial debut earned him an Emmy for his film Armed with Faith last week. The film is centred upon the workings of the Bomb Disposal Unit in KP. He has previously worked with Oscar winner Sharmeen Obaid-Chinoy on all her films 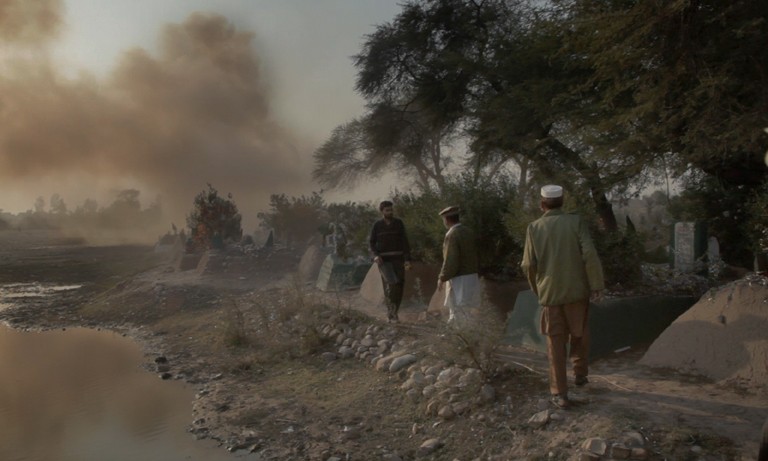 The News on Sunday: How did you start and how did you end up working on so many Emmy winning films?

Asad Faruqi: I was born in, and grew up in Hyderabad. I moved to Karachi at the age of fifteen. Growing up in these cities was crazy. Not in the ‘Karachi is a dangerous city’ kind of a way; rather it was about the hustle, fantasy and curiosity that only Karachi can give you. I became interested in filmmaking and photojournalism. I left accountancy to attend film school picking up shifts at a call centre, so I could buy my first DSLR.

Then I met Sharmeen (Obaid-Chinoy), which changed everything. Despite being in school at that time; most of my learning came from her. I’m just glad we existed in the same time and place. Children of Taliban was our first film. I was an associate producer. Which is a nice way to say I was the chota, who did everything. Matlab jahan fit karna hota tha, mein fit ho jaata tha (That is, I’d take up any role I was required to perform.) Sharmeen and I developed a great working relationship. It’s been that way ever since.

TNS: Why are your works predominately documentaries?

AF: I’m a cinema vérité filmmaker. I’ve always been inspired by life, It’s easy to make up stories that fill up cinema halls and please people. I never wanted to please people. I wanted to tell the truth. I wanted to shake people up. Documentary filmmaking is the best way to do that, because you aren’t making anything up to get people’s attention. You are just presenting them with reality. In my opinion there is nothing, more powerful than reality. The stories are always there. My job is to bring them to people. When you have lived someone else’s experience, it makes you more tolerant, it forces you to set aside your biases and judgements. But most people don’t want to know the truth. They want to be comfortable. They want to be lied to. They want to construct walls around themselves; physically and intellectually. That’s where a camera comes in. It breaks and bypasses the walls! It can make you feel like you’re sitting in someone else’s room. It forces you to emotionally connect with a reality you would otherwise not know.

TNS: A common theme in your body of work is a focus on survivors of some sort of extremism. Where does that come from?

AF: I didn’t go to KP and spend time with the Bomb Disposal Squad, because I wanted to tell the story of some heroes. I went there to find survivors. Survival is perhaps the most universal human condition. My father passed away when I was young and I grew up in a house full of women just trying to survive. Their struggle was tougher than mine. This made it difficult for me to accept the injustices around us. Partly because, my mother would keep saying "extremist na bano, extremist na bano." At the mosque I frequented, there was no escape from extremist and borderline-violent ideologies.

TNS: What was it like following around men who defuse bombs for a living?

AF: It was what it was. I mean they were the ones who risked their lives. As Abdul Rahim puts it in the film, "there is only one mistake you make when defusing a bomb, it is your first and last. We have seen our friends die. We have collected their bodies in plastic bags and brought them back." Honestly - this is no life, for anyone. There was time I spent with Tiger Khan. I realized that all this guy could do was talk about his own trauma. He could not stop, because if he did it would be just too real. Abdul Rahim’s only ambition was to become an actor. But due to our society, the way we perceive what a ‘man’ should do, he’s risking his life rather than lighting up the big screen. Except, for now, he just starred in an Emmy winning film. Didn’t he?

TNS: Were you surprised when you won an Emmy?

AF: I didn’t think it was a point of view which wins awards. We were up against Netflix! I didn’t think we would win. I didn’t write a speech. I thought I’d write a few words just in case. There was a lot of stress in just making the documentary. The most difficult moment was when I was in Peshawar at the time of the APS attack. That is not a memory I can ever let go of. I guess, it’s that way with everybody who has seen something as devastating as dead children. You might get used to it. You can never let go of it. Through my film, I have talked about these issues in the way I am most comfortable. It ended up winning an Emmy. What were the odds?

TNS: People say your work projects a negative image of Pakistan. How do you respond to this?

AF: Yeah, I hear this a lot. Especially working with Sharmeen, and the kind of blacklash she gets even for some of the things she posts online, without people having actually seen or read what she says.

What I’m trying to do is show how in a region, you’ll find the terrorists, the victims and the men trying to combat terrorism. Mainstream media is quick to paint the obvious villains, but as the film shows, it’s not that simple. Tiger Khan, one of the bomb disposal squad members featured in my film, explains it well when he talks about the chaos that wrecked KP and the FATA after the US drone strikes. Viewing terrorism through the eyes of those who are actually fighting it shows you how complicated the human conditions created by this process are.

Those who think that this film is irrelevant to the current Pakistani context, are failing to see that this is the first film which shows a Muslim bomb squad fighting other Muslims they see as terrorists. For too long, the Western media has depicted Pakistan’s alleged complacency and lack of interest in fighting terrorism. The predominant image of Muslims is that they are terrorists. This is simply not true. As the film shows; all the victims of these terror attacks are Muslims, being bombed by Muslims and being protected by Muslims who are members of this bomb squad. That, I believe is very important in understanding Pakistan’s role in the war on terror.

Survival is perhaps the most universal human condition