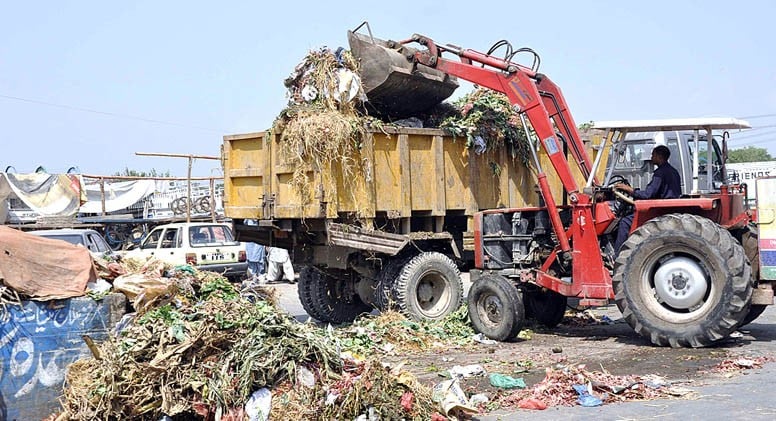 Citizens in Karachi continue to deal with heaps of waste. While no institutional response was received from the local or provincial government, the antics of the mayor on August 26 and 27 added insult to injury. After a verbal brawl with Syed Mustafa Kamal, former city nazim, the mayor first appointed him as ‘project director garbage’ and then suspended him in less than 24 hours. Many people were made to believe that our public office holders have no sense of empathy towards the miseries of the people.

Federal Minister for Ports and Maritime Affairs, Ali Haider Zaidi, launched a cleanliness drive recently. The provincial government criticised him for allegedly adding more filth to urban spaces than removing it. As per several news reports, the performance of Sindh Solid Waste Management Board (SSWMB), district municipal corporations (DMCs) and cantonment boards has not been satisfactory during the recently celebrated Eid-ul-Azha. Swarms of flies and mosquitoes can be seen in the city. The waste management system in Karachi faces new challenges which demand that appropriate attention is given from all quarters in a scientific manner. This can happen when the powers that be look at the situation in an objective manner.

Increase in consumerism and emerging complexities in lifestyles has increased waste. Apart from an overall increase in the weight and volume of municipal solid waste, several other types of trash have been added to the waste.

Many private hospitals and healthcare facilities generate hospital waste of hazardous nature. Use of electronic gadgetries has given rise to electronic waste. Rubber, plastic, paper, industrial and biological waste of different volumes, contents and characteristics is created. While municipal waste is hardly removed, new forms of waste are not handled.

Epidemics of unforeseen magnitude have recently spread in different parts of the world. Waste management is obviously one of the key factors. A few months ago, seven samples from sewage tested positive for polio virus.

Epidemics of unforeseen magnitude have recently spread in different parts of the world. Waste management is obviously one of the key factors. A few months ago, seven samples from sewage tested positive for polio virus.

The fallout of poor hygiene and solid waste management on the economic performance can be grave. Investments, enterprise and employment opportunities are adversely affected in such situations.

The present day service delivery in respect to solid waste management is asymmetrical. District Municipal Corporations of Karachi Central, West and Korangi dispose of waste in their respective jurisdictions. SSWMB is responsible for Karachi South, East and Malir. Management of the dumping sites at Jam Chakro and Govind Pass are the responsibility of Karachi Metropolitan Corporation (KMC). Additionally, the cantonment and other autonomous land management agencies are supposed to deliver these services in their respective areas.

Several steps are taken to dispose of waste. Collection of household-level garbage, transfer of garbage to secondary collection points, lifting waste from various secondary dumping points and transporting it to the city dumping sites, maintenance of vehicles, roads and streets are some core functions in waste management.

Many parts of the city show this arrangement is not working. Spot checks at some neighbourhoods reveal basic shortcomings. At the union council level, it was found that sweepers were mostly doing private work. Lack of basic equipment, such as wheel-barrows and spades, absence of proper supervisory staff and lack of designated points for transporting waste were the key issues.

SSWMB that has a budget of about Rs1.7 billion has outsourced this task to private contractors. Its performance was criticised by the Supreme Court-mandated Water Commission, led by Justice (retd) Amir Hani Muslim. Other tiers of municipality depend upon transfers from the provincial government.

Research says recycling is an established enterprise. It is organised and managed at an informal scale. Street scavengers, collectors/contractors, re-cycling plant operators and buyers of recycled products are the key actors in this process. Paper, glass, metal, rubber, clothing, dried bread, used cans are the main articles collected from various sources for feeding into the recycling stream.

It is estimated that this activity generates livelihood for over 65000 households. It also helps in reducing the volume of waste from the neighbourhoods. However, this enterprise is operating below its potential due to its informal nature, threat from state institutions and limited possibility of expansion.

Waste management is a restricted occupation as far as the primary collection, cleaning streets and nullah maintenance is considered. Many local people are associated with this work for generations. With the passage of time, they have progressed socially. This community acts as a strong lobby to safeguard its livelihood and income. However, this community can be motivated to be more productive and useful. Their potential has been analysed in-depth by several consultants and researchers who prepared the solid waste management strategy in the 1990s for Karachi Metropolitan Corporation.

Occupational safety and security of sanitary workers is an essential aspect. Provision of proper tools and protective gears must be a compulsory feature of the work.

Solid waste management needs immediate attention. A few steps must be taken. The KMC must undertake a broad-based stocktaking of the existing situation to set its priorities right. A comprehensive survey needs to be done to establish the quantity (during different time zones of the year and locations) and types of solid waste. A plan must be prepared to reuse and recycle maximum quantities of waste, if not all. This must be done in consultation with the DMCs and Sindh government.

The staff needs training. From coolies to engineers, a rigorous exercise must be undertaken. Options of public-private partnerships may be explored in specialised domains of services, such as hospital or electronic waste management. KMC must devise a monitoring mechanism for SWM in consultation with DMCs.

The writer is Professor and Dean, Faculty of Architecture and Management Sciences, NED University, Karachi