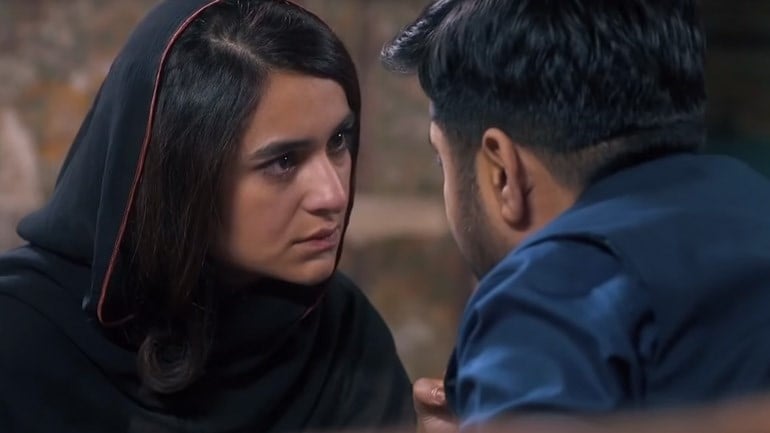 Pakistan’s TV drama has come a long way. Whereas earlier there were topics that were considered taboo and, hence, brushed under the carpet, today the plays are highlighting them boldly.

To a more discerning viewer, the portrayal of women in these plays might seem regressive -- the women are presented either as vamps or as weak, passive characters who are forever at the mercy of the men around them. However, recently, when I saw the trailer of a drama serial, titled Inkaar, I knew this was something I did not want to miss.

"Inkaar" is Urdu for "No," yet not many people understand the meaning or significance of this word. Every week I’d wait for the next episode to see how director Zafar Mairaj had conveyed the message that ‘No means No’!

To my pleasant surprise, it was a thorough production. The plot was focused on its theme, and the message was very clear. The play showed what a girl, particularly one who comes from the underprivileged strata of society, has to go through to get justice when pitted against people from the upper class.

I don’t mind happy endings in movies, books or dramas, but when such important issues are projected they ought to be dealt with in a serious manner. The story of Inkaar is apparently quite similar to the real-life story of Khadija Siddiqui, who was stabbed by her class fellow in broad daylight in Lahore. As the drama neared its conclusion, my expectations about the villain getting his due peaked. However, the drama took an abrupt turn when Hajra (played by Yumna Zaidi) submits her pardon after the court has sentenced the culprit Rehan (Imran Ashraf) to imprisonment. This, despite the fact that Rehan attempted rape, stabbed her multiple times with scissors, tortured her mentally, slandered her in court, and even kidnapped her brother when she refused to marry him. The good-hearted Hajra believes that Rehan should be sent to live with his mother so that he can learn to respect women and become a better human being.

My problem with this kind of ending is that when a person is found guilty in a series of heinous crimes he must be punished even if the victim chooses to forgive him. The state should step in and take charge, as it did in Qandeel Baloch’s case. Only then would a strong message go out to the society at large.

Another drama serial, Cheekh (or Scream), which concluded recently, focused on the faulty judicial system and showed how the leading lady Mannat (Saba Qamar) loses everything in seeking justice for the murder of her best friend Nayab (Ushna Shah) at the hands of her brother in law Wajih (Bilal Abbas Khan), a rich, spoilt kid. It reaches a point where Wajih accidentally kills his own brother Shayan (Emaad Irfani), Mannat’s husband. He is also responsible for Mannat’s miscarriage. So, it serves him right that the court awards him death sentence.

When a person is found guilty in a series of heinous crimes, he must be punished even if the victim chooses to forgive him. The state should step in and take charge, as it did in Qandeel Baloch’s case. Only then would a strong message go out to the society at large.

Not everyone seemed to agree with the ending. On social media, I found a lot of people saying that if Wajih was punished, why Rehan was set free. I want to tell them that the real world works very differently from, say, the reasoning provided by Hajra in Inkaar. Laws and punishments exist for a reason. If law is not implemented then the state will lose stability.

It was heartwarming to see how Hajra’s father stands by her till the end -- it’s not a common sight, and girls are usually killed in such cases. The play ends with father and daughter having put up a good fight against a feudal lord and a powerful bureaucrat.

It is unfortunate how the society is shown to believe in Rehan till the court declares Hajra innocent and pious. This speaks a lot about the society in the real world also.

Like I said earlier, our TV dramas are now tackling bold and taboo subjects. Yet, they have a long way to go in exposing the true face of society.