A meme is worth a thousand laughs

Humour has ruled the cricket world cup, so far! 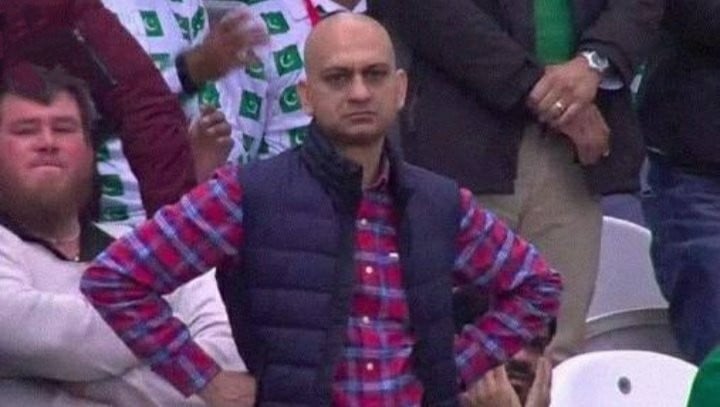 Since the start of the cricket world cup over a month ago, there’s no stopping the memes. Be it Sarfaraz Ahmed’s yawn, a comparison between 2019 and 1992 cricket world cups, a cat trying to squeeze into a narrow wall… Memes have ruled the internet.

So what’s a meme? It’s an image, a video or a phrase or graphics interchange format (Gif) that’s humorous in nature and is widely circulated on internet. A meme must "go viral" to be successful.

Remember that cricket fan whose image went viral after the Pakistan-Australia cricket match, that guy at the right place at the right time, posturing a complex mix of disappointment, frustration and outrage after Pakistan lost to Australia? His family and friends call him Muhammad Sarim Akhtar but his social media followers know him as the Meme Guy.

"To see Muhammad Asif drop David Warner’s catch barely 10 feet from where I sat in the stadium was really disappointing. I stood up in disbelief, and somehow that expression of mine got caught on camera — and went viral," he say.

"Obviously, I was elated," says Akhtar. "My son made me a father’s day card with my picture and a caption, ‘My father is in the news’".

Generally, so far, the sense of humour around the world cup has been "good natured". "That doesn’t mean a darker side does not exist. It’s impossible to generate a meme that someone somewhere will not enjoy," says Zainab Durrani, Project Manager at Digital Rights Foundation.

Zainab thinks of the Aunty Gormint meme, where the lady in question was not pleased with her portrayal. "A person shouldn’t fear instant popularity or notoriety because they’ve given their opinion online or through the broadcast media."

She adds, taking a person’s picture and circulating it without his or her consent is unlawful (under section 24 of PECA). "The question of public domain arises if a meme has been made from an already published picture — and the law is silent on that."

Hammad Anwar, Co-Founder and Lead Curator Mani’s Cricket Myths, says "Memes have become a way to express thoughts and energies, but sometimes they cross the limits." He mentions the image of three Afghan girls watching a match with a nasty caption, "During the Pakistan-Afghanistan match, there were tonnes of sick memes on Afghans after a fight broke out between the supporters from the two countries."

Memer Moin Nazim says, "It [meme] can become a disaster. Still 90 percent of the time, it’s a hit." He also used Sarim Akhtar as a character in one of his memes. "Sarim was going viral as he showed what the match was really about. I couldn’t resist making a meme on him. I respect him as he took every joke light-heartedly."

"A meme has to be spontaneous. Otherwise it loses its relevance. It’s like a chain reaction of emotions, where everything must be timed well. For a meme on a cricket match of the world cup, one typically has the last seven overs — to work on the catchy phrases and attractive artwork."

Another memer, Ahmer Naqvi, known better as @KarachiKhatmal, says, "To create a meme, a person needs to have an eye for the picture and a sharp and humourous mind. They must relate with the current scenario - that’s exactly why Sarim’s picture went viral."

But, he say, "the interesting thing is… one will never understand the context if that particular moment has passed."

‘Rants of a Pakistani Citizen’ is a Facebook page with over 12k followers. The page admin prefers to stay anonymous as he uses an alternative identity to upload unpopular opinions about society, religion and politics. A memer since 2011, he says, for an effective meme, "using anything from the Game of Thrones is easy as people can relate to it, using an extreme expression is also easy… But before sending out a meme one must ask oneself if it sounds funny."

Amber Rahim Shamsi, who is a prolific twitterati, says, "In this political crisis mode, we’ve developed a sense of humour which makes it easier to deal with disappointments. And as a picture is worth a thousand words, people instantly relate to these."

She thinks humour cannot be censored, even if it is in bad taste. Still, she adds, "Memers must be mindful of provocation, racism, sexism and hate."

In today’s often lonely and bored life, memes offer some relief from the monotony of mundane life!

A meme is worth a thousand laughs