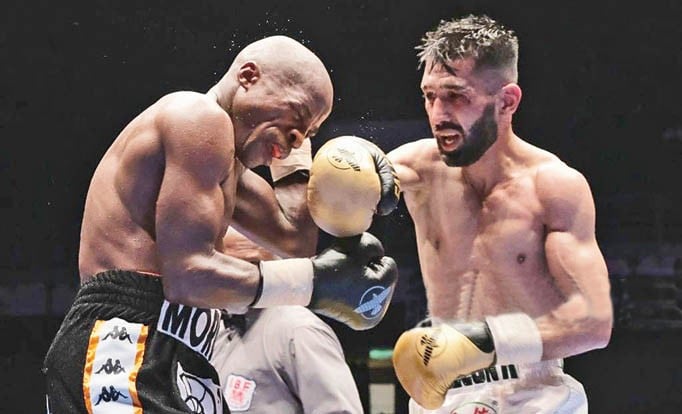 This year is going to be very important for Pakistan’s professional boxer Mohammad Waseem who is undergoing strenuous training under MTK Global, a world renowned boxer development company.

The 31-year-old fighter, who has to his credit two World Boxing Council (WBC) titles, is scheduled to fly out of Glasgow for Madrid today (Sunday) to train for a week. The purpose of his training in Madrid is to improve his conditioning. The weather in Spain is warm while it is chilly in Glasgow. And a variety of sparring partners in Madrid will help the former Asian Games bronze medallist have a new experience of training. Three other boxers and two trainers are going to Madrid with the Quetta-born fighter.

In a detailed chat with the fighter, it has been learnt that training in Glasgow is going to be a turning point in Waseem’s career as MTK Global is providing him with facilities of every kind. The focus is on conditioning which is the most important thing in the modern era.

It was unfortunate that Waseem’s first fight under MTK Global, scheduled for June 22 against John Chuwa of Tanzania, was cancelled because of irregularities in transmission of the MRI reports to the British Boxing Board of Control. The reason behind it could not be ascertained as Waseem’s trainer Danny Vaughan did not respond when I asked him about the issue.

But certainly cancelling a fight at the eleventh hour is not good. Waseem was perfectly prepared for the ranking fight, scheduled at the Emirates Arena of the MTK Global Glasgow Centre.

But Waseem has digested it and is eagerly waiting for the next fight. After his medical tests, it is highly expected that he will fight in the second week of July in a Liverpool show.

Waseeem has trained in the US, Japan and South Korea, all different environments. In the US, the focus is on speed and in Japan boxing is a bit slow with focus on techniques.

After losing the IBF flyweight world title to South African fighter Moruti Mthalane last year Waseem is yet to return to the ring.

His aim is to stay calm, play a few fights and then go for the world title. "It is going to be a very important year for me. Although I have yet to return to the ring after my bout in last summer in Kuala Lumpur my focus has been on training," Waseem told ‘The News on Sunday’ (TNS) in an interview.

"I am extremely happy that it is going very well. I am super fit for any challenge. But what I want first is to battle for regaining the WBC flyweight world silver title.

"It’s going to be very important as I need to improve my ranking. If I regained the WBC silver crown I would go to the top and that would help me challenge a world champion," he said.

"I will not rush. I will stay calm. It is hundred percent sure that I will play a WBC world silver title fight this year and I am optimistic that I will regain that," he said.

Having won the WBC world flyweight silver crown twice in the second half of 2016, Waseem had to fight for meeting his financial needs. There was a time while working with AK Promotions of South Korea when Waseem did not attract sponsors despite having held two world silver crowns.

Being World No1 it was not difficult for him to win any fight but he could not play his world silver title defence fight because of financial issues. He not only lost his top ranking but also the coveted belt.

Waseem feels that Pakistan’s corporate sector has ignored him. And without any valid reason.

Former two-time world champion Amir Khan of England is warmly welcomed when he comes here. We always see a big media protocol when Amir comes to Karachi. Sponsors come and he is treated like a Pakistani champion despite the fact that he has never played a fight for Pakistan in his entire career.

Amir got good media coverage during Ramadan when he had to brief the reporters about his fight against Indian boxer Neeraj Goyat, which will be held in Jeddah on July 12.

But when Waseem holds a presser, only a few reporters attend that.

Yes, Waseem is now a professional boxer, but at least he represented Pakistan for over a decade in amateur circuit.

He has been the only boxer of Pakistan to win medals in international circuit after the last batch of Pakistani boxers featured in 2004 Athens Olympics.

In the post-2004 generation Waseem was a real star who started clicking at a time when former AIBA and Pakistan Boxing Federation (PBF) chief Professor Anwar Chowdhry’s golden era had ended and Pakistan’s boxing was not in good hands.

We rarely hear any good news from sports other than cricket. So why not own and respect Waseem, who stunned the entire world by claiming the WBC world silver crown in only his fourth pro bout?

Amir Khan has his own place and he should be respected as his parents belong to Pakistan. But Waseem should not be ignored. His fights should be broadcast live. Waseem is also willing to play some bouts in Pakistan in future. His trainer Danny Vaughan told me a few days ago that MTK was also keen to see Waseem play in Pakistan.

The day is not far when Waseem will become the first Pakistani to win a world title in professional boxing.

Let’s treat him like a hero and give him respect which will motivate other Pakistani young boxers, too.

Waseem has played nine bouts in his pro career, winning eight with six knock-outs. He lost only against Moruti Mthalane of South Africa in the IBF world title bout in Kuala Lumpur last summer.