Penang is one of Southeast Asia’s hottest destinations with the perfect blend of history, culture, art, food and beaches 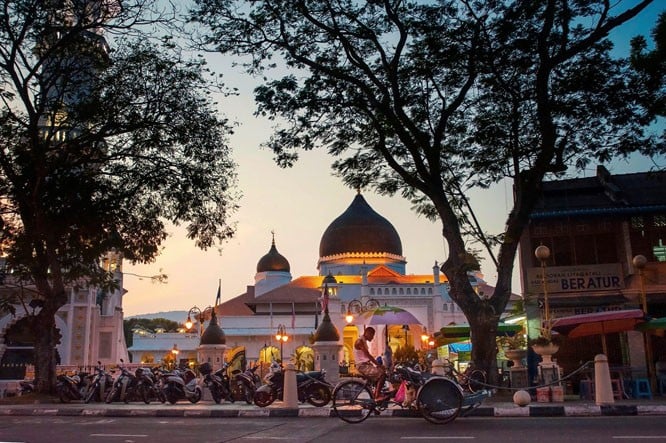 Penang has the beaches and island living vibe, it holds an old world charm incomparable in the Southeast Asia, it has colonial remnants, Peranakan Mansion, night markets by the beach and an unparalleled  food culture, and all together these will overwhelm your senses. It’ll allow you to keep your flip-flops, summer dresses and the privilege of choosing to give up the ‘must-do’ list. Once in Penang, you must allow yourself to find ‘your’ Penang by savouring its richness and remaining mindful of its gentle ways and pursuing a worldly eat-pray-love experience.

Penang is not a city. It is a state consisting of the turtle-shaped island of Penang and a part of Peninsular Malaysia known as Seberang Perai. The two cities you will most likely visit in Penang are George Town (on the island) and Butterworth (on the peninsula), connected by a bridge. You can also use the ferry to go between the two cities. Most of the attractions are in George Town -- also a Unesco world heritage site -- but if you have more than a couple of days, the 20-minute ferry ride across might be worth it, to explore a city that is building itself up to come at par with her more accomplished and sophisticated sister.

Once a British Crown Colony, Penang is one of the richest and the most developed states in Malaysia, second only to Kuala Lumpur in terms of the Human Development Index, boasting a literacy rate of 99.5 percent. All this development and prosperity may seem far removed from our perception of what an island getaway should be but Penang has carefully curated and balanced its identity. It is a destination for a traveller who enjoys art, culture and history, all nestled between lush green hills and iridescent beaches.

You can opt to fly in directly from Bangkok to George Town instead of travelling from Kuala Lumpur (KL). Alternately, budget airlines offer a 50-minute flight from KL. A bus or train trip will take up to five hours but promises great scenery along the way. However, weekends and holidays can cause severe traffic jams. You will then have to ferry across to George Town or take a bus across the bridge from Butterworth.

Your two main options of locations on Penang include the city of George Town or the beach town of Batu Ferringhi. They are separate districts but just 20-minutes away by car. So you can stay in either town and enjoy the charms of both. Room rates are generally lower in Batu Ferringhi and it is worth spending a night on the beach to take in the sunset, sunrise and the night markets.

Penang is rated one of the world’s top street food destinations. For me, possibly, the best for its diversity and cleanliness, while still maintaining its street cred by seating patrons on tiny plastic stools and live cooking.

Top tip: these night markets are much cheaper than ones in Kuala Lumpur.

A stay in George Town gives you access to most of the historical and cultural attractions, nightlife and shopping.

Penang is rated one of the world’s top street food destinations. For me, possibly, the best for its diversity and cleanliness, while still maintaining its street cred by seating patrons on tiny plastic stools and live cooking. The food culture of Penang is dominated by the original Indian and Chinese immigrants to Malaya. Over the years, the three cuisines have come together to give us fiery curries, earthy stir fries, and spicy grills based in the holy trinity of Malaysian food -- coconut, sweet soya sauce and chilli.

Visiting Greenlane Genting Food Court, Cecil Street Market and Chulia Street Hawker Center will cover all your cravings for an authentic Asian street food situation and Instagram-worthy food shots. On your must-eat list in Penang should be Hainan Chicken Rice, Penang Laksa (yes, there are many varieties of the Malaysian Laksa, contrary to what eateries here would have you believe), Char Kway Teow (stir fried flat noodles) and Penang Rojak (a mix meats, tofu, vegetables and fruits smothered in a sweet peanut syrup).

Of course, a visit to Penang would be incomplete without a sampling of the Mamak -- a uniquely Malaysian-Indian food stalls, where the iconic Teh Tarik and Roti Canai were invented.

In this multi-cultural state, you will find grand Hindu and Buddhist temples, alongside sombre mosques and churches.

My top pick on the divine Penang trail is Wat Chaiyamangalaram Temple, the Thai Buddhist temple, home to a 33-metre-long Reclining Buddha, one of the largest in the world. This is an interactive temple where you can figure out your Chinese zodiac and the corresponding Buddha.

Dhammikarama Burmese Temple is just across the street from Wat Chaiyamangalaram Temple. The art and architecture of this Burmese Buddhist temple is in stark contrast to the Thai. The statues and 3D murals tell many stories. Feel free to ask any of the attendants and they will be happy to explain.

Kek Lok Si, the Chinese Buddhist temple, is located on two storeys across Penang Hill. Not only does it offer panoramic views, its own gardens and ponds offer some time for reflection.

Khoo Kongsi Temple, built as a clan house by a family of wealthy Chinese traders of the same name, is perhaps one of the most intricate pieces of religious architecture in Malaysia. It also includes a museum and theatre.

Kapitan Keling, a mosque built in the 19th century by Indian Muslim traders, is named after the leader or captain of the Indian community back then. Keling is the Malay reference word for ‘Indian’, which is considered a racial slur now yet the mosque retains its original name. Visit it for the clean, cool marble work and its status as part of the George Town World Heritage site.

This is a tricky one. There is something for everyone to love in Penang. I could list cultural events and spots, bars, pubs, homes of legendary Chinese mafia bosses, street art, shopping and so much more.

The list is possibly endless. Penang’s big sell is the cultural factor or more recently, the Instagram factor. The state has made it to the world art with its quirky street art created by Ernest Zacharevic.

The art scene in George Town is quite happening so be sure to check on the festivals happening during your trip there, the most important one being the George Town Festival in July.

A big part of Penang’s identity is its Peranakan history. The term refers to the earliest Chinese immigrant traders who mixed with locals, creating a unique culture in terms of food, art and architecture. Some of their traditional homes have been turned into hotel-museums. The two most well-kept mansions are the Pinang Peranakan Museum and the Cheong Fatt Tze Mansion or the Blue Mansion. If I had to choose one, I would go for the Pinang Peranakan, simply because it is more ornate.

Penang has a universal appeal. It offers a comfortable contrast to the foremost Malaysian destination -- Kuala Lumpur at much cheaper price. Whether you are looking for a beach break, some perspective on Southeast Asian history or just some great value shopping, you could easily spend your entire week here. Penang awaits!