"I articulate my emotions through music without looking for words." 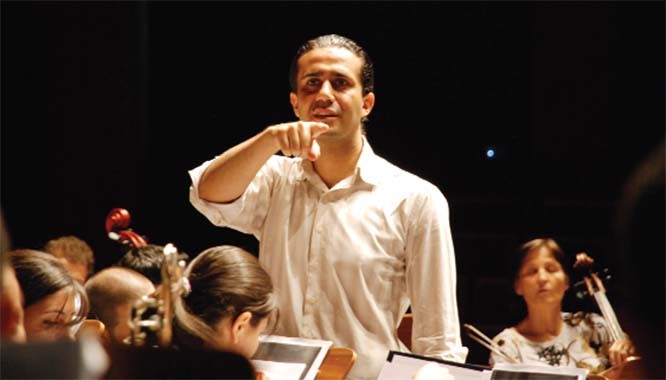 Pacing around the airy Lahore Gymkhana on Upper Mall, Nahel Al-Halabi has that look of shattered exhaustion which goes hand in hand with achievement and elation. For a world-class musician, composer and conductor, this must be a common experience after a superb performance the night before.

Al-Halabi has nurtured his players, watched the orchestra reach ever-greater heights, and delighted in playing the trumpet. He tackles everything he does with matchless passion and commitment. He looks younger than his four decades, hair swirled aside in a thick mop, clothes a coordination of neutrals. His manner is at once serious and good-natured. He speaks in complete sentences that could be written out verbatim.

Al-Halabi grew up in Damascus, Syria. Serious musical education began when he graduated from the Higher Institute of Music in Damascus, and a career launched when, at the age of 16, he demonstrated his talent as a composer by forming a chamber orchestra. The next turning point came when he left for Italy.

The discipline and excitement of regularly learning and performing has been vital to him since, as has been the nostalgia of separating from his populous and loving family at such a young age.

Here Nahel Al-Halabi reminisces about his career, his dreams and ambitions, and about how he shapes musical sentences into rhythmic paragraphs

The News on Sunday (TNS): When and how did you get interested in music?

Nahel Al-Halabi (NH): When I was barely thirteen years of age, my elder sister asked me: "Why don’t you play the trumpet?" I don’t know yet why she asked me that, because she liked the trumpet as an instrument or because she had a liking for a particular trumpet player. In Syria, there were marching bands that comprised of brass and percussive instruments. I learnt to play the trumpet, initially, in a band, in addition to the recorder flute (flauto dolce, in Italian) and the keyboard, at home.

However, my professional training in music began at the age of sixteen in Damascus at the Higher Institute of Music where I studied for five years under Valeri Lobanov and Jihad Sukkar. After that, I won a scholarship to study music, and was asked to choose between Germany, Japan and Italy. Of course, I chose Italy because of its illustrious contribution to music, to learn trumpet under Elia Savino at the Nicolo Paganini Music Conservatory in Genoa, for five years.

Once I had finished the degree programme, I was offered to enroll in a diploma course entitled ‘Music Composition for Images’ for three years. It was a specific course designed to imagine situations and feelings before composing. My métier had always been the trumpet. During this time, before returning to Damascus, I attended seminars and courses in orchestra-conducting under Howard Williams.

TNS: Has the trumpet ever had a significant role in chamber music or the orchestra?

NH: When we talk about western classical music, we often divide it periodically into genres and movements. For example, the Classical Age starts from Mozart and Haydn and ends before Beethoven. The early Romantic era starts with Beethoven, Tchaikovsky and Chopin followed by Ravel, Verdi, Puccini, and others. Trumpet made small harmonic interventions in those days because, technically speaking, trumpet was not developed enough to play alongside other instruments. For example, trumpet could only be played in F, G and D which means you could only play a few notes on the scale.

During the Romantic period, they enhanced it and now it could be heard more often. However, in modern classical music, the trumpet is being played much more than before which has helped it deploy a powerful presence in the orchestra like any other instrument.

TNS: What prompted you to return to Syria?

NH: Upon my return to Damascus in 2007, I founded the Syrian Philharmonic Orchestra. Initially it comprised of wind instruments only but gradually I also added string instruments. Until then, we only had the Syrian National Symphony Orchestra which I had played for as a trumpeter.

I wanted to create another orchestra so that it could compete with the state-run orchestra. It was tough in the beginning but the idea was to create an alternative platform for younger musicians where they could explore the opportunity of finding professional work. Initially, we would play only western classical compositions but now even Arabian music composed for full orchestra or ensemble is played out.

I have also conducted various other orchestras such as the Euro-Mediterranean and Palermo Classica. I’ve worked with international theatres such as the Opera House in Damascus, the Giuseppe Verdi in Pisa, and at festivals of music held at Krak des Chevaliers, the Palmyra Amphitheatre in Syria, the Cloister of St Anne in Palermo, and at Nadi Midan Amphitheatre in Dubai.

TNS: Tell us about CRC, and the projects generated through it.

When I was invited to the Faiz International Festival, my participation was two-fold: to ‘promote peace through music’ and to give a musical performance.

NH: The project is conceived by CRC (Culture, Research and Communication) which is a society or an organisation. It’s partially supported through private funding and partly by the public sector. Our plan is to research the intangible heritage, and present it by using new technology, especially information technology that may include virtual reality, virtual museum, software applications, documentaries and even operas. We may also be connecting peoples and bridging gaps through e-books and electronic brochures such as an iPad or a mini-tablet.

Music is the common thread that connects all intangible sectors, such as ways of life, religions, political infrastructures, material cultures and territories. By employing technology you can gain visibility anywhere. For example, in order to explore Pakistani culture, one may visit Pakistan physically from Germany but by using this technology, one can visit Pakistan virtually while living in Berlin or, for that matter, in any other German town. Virtual space and reality will help him imagine and conceive his site to be anywhere in Pakistan. The information based on research will be filled in and updated by universities.

The second phase of the project is artistic creativity. The artist will transform the result of his research into creative output in accordance with the public demand using technological innovation. The third and the final phase is the technical product. Through intangible heritage, one can interpret the society and its culture profoundly.

Take, for example Seraiki folk music. The issue is to understand the melody line, the instruments employed to create that melody, what those instruments were like 2000 years ago, and what natural materials they were made of. Through that information, one can arrive at an imagined way of life to understand the occasion of play.

We’ve planned to initiate this project in collaboration with Arab countries, and until now we’ve proposed to the Sultanate of Oman, Kuwait, UAE, and to Italy in Europe.

TNS: What has been the importance of music in your life?

NH: When people from different cultural backgrounds come together, they have to look for a common means of communication. More often than not, it’s the English language. I, for one, do not feel comfortable speaking in English. I articulate my emotions through music without necessarily looking for words. I feel I can explain myself a lot better that way. Gustave Mahler, the German composer once said: "Music begins where words end." Words do make a lot of difference as in the case of Iqbal, Faiz, Dante, Goethe and Jibran, to name a few, but music is a universal language understood everywhere by everyone without the need for words. My idea has been to create music without borders - not only physical borders but also cultural ones.

I acquired expertise in playing the trumpet; my second love has been double bass.

Even though it’s hard to recall who inspired me when, but Bach has been an all-time favourite followed by Vivaldi and Beethoven. I also love Puccini, Shostakovich and Rachmaninov, and contemporary composers like Britten and Bartok. Bartok had the patience to understand music. He also travelled a lot. He was inspired by melodies in traditional music, and transpired them into music he wrote for the orchestra. In the finale to The Miraculous Mandarin, for example, he used popular music he came across in the village of Biskra in Algeria.

I particularly like Wynton Marsalis, trained both as a classicist and a jazz player. Since my training has been in the classical tradition, I find Maurice Andre from France and Timofei Dokshizer from Russia are the finest players ever.

TNS: What was the Lahore Project about?

NH: The idea behind the Lahore Project was to develop traditional Pakistani melodies with the aim of creating an intercultural dialogue. About two years ago, I had experimented on a much similar project with the International Alert Organisation based in London, when they sent me a melody composed and played by Anoushka Shankar. I focused on the melody line adding to it elements like harmony, structure and other instruments.

When I was invited to the Faiz International Festival, my participation was two-fold: to ‘promote peace through music’ and to give a musical performance. The work was much more challenging than I had thought. Initially, his daughter, Moneeza Hashmi, briefed me on Faiz Ahmed Faiz’s life and times, about the fact that even though he’d lived in Lahore, he’d also spent time in Syria and Lebanon apart from several other countries.

Arshad Mehmood and Nafees Ahmed sent me several melodies, and I chose three of them, namely Raga Madhuwanti, a Thumri in Raga Pilu, and a Seraiki folk song. I analysed their melodic line and then incorporated them into my compositions, giving an ethnic feel to Madhuwanti, a cinematographic appeal to the Thumri and a classic touch to the Kaafi. I did, however, consider the fact that two Pakistani musicians, one on tabla and the other on sitar, will be playing live with recorded music, and that the fusion should represent a dialogue between the East, the Middle East and the West. This was also manifested through the presence of musical instruments of three different geographic regions (sitar, tabla, oud, nay, daff, duduk, zorna and full orchestra).

Our next project would be to play the entire music live in London and Milan.

TNS: What does PAMAC stand for?

NH: PAMAC or the Ancient and Contemporary Music Heritage is a project that intends to deepen the dialogue between peoples through the enhancement of the universal language of music. It wants to research intangible artistic heritage by penetrating cultural depths to foster a deeper understanding of cultural diversity. Music, in this context, will help in reinterpreting the evolution of traditions of the past on the one hand, while on the other it will summarise values and make them vulnerable to different readings, opening them up to new perspectives.

To sum up, PAMAC aims at researching intangible cultural heritage, particularly that of music and its interrelationship with dance and literature in a significant period in history. In this way, transformation mechanisms would be analysed with reference to periods in history in order to repurpose these arts by using innovative computer technology that will result in production and extensive dissemination of knowledge in the cultural sector as well as the mass media.

"I articulate my emotions through music without looking for words."