This city of libraries, sculptures and castles, as well as music, art and dance is a European fairytale come to life 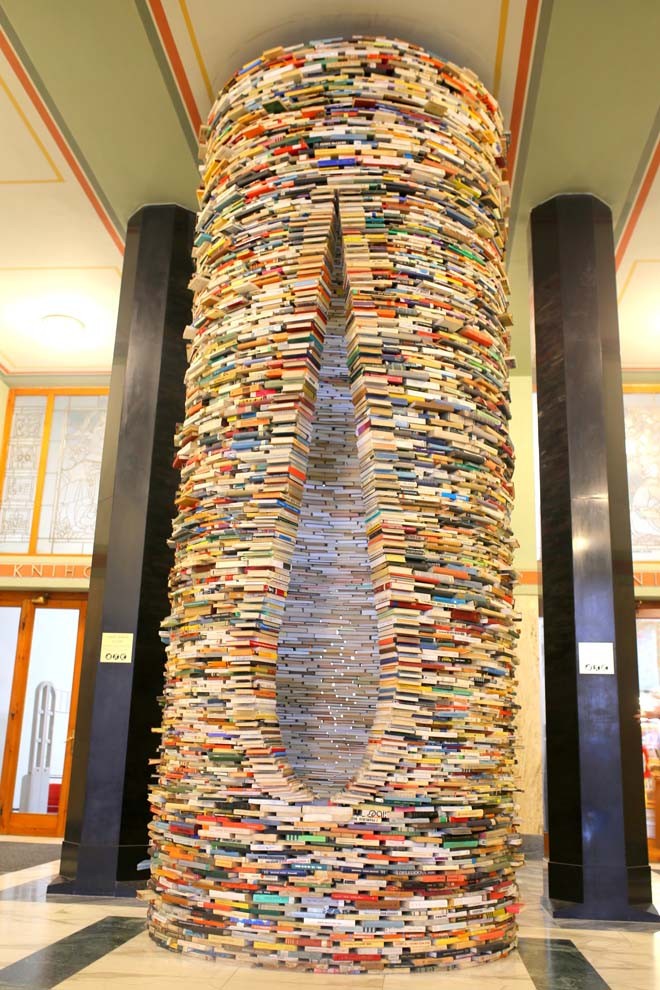 I can’t really recall and pin point what exactly took me to Prague. Whether it was the gothic churches in the city, the stunning architecture, burnt orange rooftops, the cobblestone streets or the tucked away alleys, I am unsure. But if there is one thing I’m certain about, it is that visiting Prague was a great decision and I’d go back in a heartbeat.

My friend and I reached Prague at night. On our way to the hotel, we saw the city lit up for Christmas and instantly knew we were in for a great experience. As tempted, as we were to step out and explore the city, we called it a night and woke up early the next day to begin the adventure.

Most people rush to the John Lennon wall or the Prague Castle when they reach Prague but my friend and I went off the beaten path and visited the Municipal Library of Prague first. The library holds a hidden gem that every visitor in the city may not be aware of. At the entrance of the library stands a marvelous book sculpture known variously as a Book Tunnel, Book Wormhole, and Book Vortex. Officially titled Idiom and created by Slovakian-born sculptor and artist Matej Kren, the sculpture consists of thousands of books stacked in a cylindrical pattern with the overlapping style of a Jenga game. Inside the sculpture, mirrors have been placed on both the sides to create the illusion that you’re looking into a never-ending vortex of books.

Prague is an endless maze of beauty, history and culture. One of the things I liked most about the city is that one can walk everywhere (while burning the gelato calories through the cobbled streets) and finding hidden gems along the way. We walked from the library to the Astronomical Clock in the Old Town Square. What’s in a clock, you may ask? First installed in 1410, this medieval astronomical clock is the third-oldest astronomical clock in the world and the oldest one still operating adding so much character to the old town square.

We took a tour of the Klementinum, where our tour guide took us through the astronomical tower all the way up to see the burnt orange rooftops. The city looks so picturesque from up there. The views are absolutely breathtaking and worth all the scary wooden steps one has to take through an ancient building to reach the top. The guide also took us to the Baroque library, which is one of the most beautiful libraries in the world. It first opened in 1722 as a part of the Jesuit University based in Klementinum and houses over 20,000 volumes of mostly foreign theological literature. The interior of the baroque library has remained intact since the 18th century. The hall is decorated with ceiling frescoes and it has a remarkable collection of geographical and astronomical globes and clocks.

While aimlessly walking in the city, we ended up in the area with the Frank Kafka statue. The eleven-metre-high statue is a 21st-century technical marvel of Prague. Forty-two moving panels form the face of the great Czech writer Franz Kafka. This statue by David Cerny stands at the Quadrio shopping center and combines art with modern technologies and the traditional "golden hands" of Czech craftsmen. Watch the Metamorphosis, wait for the right alignment of the panels and discover Kafka.

One can’t speak about Prague and not mention the Charles Bridge. While the bridge is quite iconic, it’s the views from the bridge that are actually breathtaking. Taking a stroll on the bridge at any time of the day is a beautiful experience but at sunset it is absolutely magical. While one can spot pigeons flying when you look at the sky, the river beneath the bridge is home to gorgeous ducks.

Wondering what’s going to be our next stop and walking wherever the route took us, we ended up at the John Lennon wall. What’s a trip to Prague without taking a picture at the wall anyway? There may be a time when it was a normal wall but since the 80’s, it has been filled with John Lennon-inspired graffiti and pieces of lyrics from Beatles’ songs. Most people come here to take a picture but end up staying a while singing and dancing along with street performers. This is what I love most about Europe – you find musicians and dancing around every corner. There is a thoughtful composure behind every street and an intrinsic beam of joy inside the people who live and roam around those streets.

On our last day in Prague, we went to the Prague Castle and spent the greater part of the day there. From witnessing historic architecture to an Asian wedding, we saw it all there. Dating to the 9th century, the Prague Castle is one of the most historical castles and the official office of the President of the Czech Republic. Back in the day, the castle was a seat of power for kings of Bohemia, Holy Roman emperors, and presidents of Czechoslovakia. The Bohemian Crown Jewels are kept within a hidden room inside it.

The views of the city from the back of the castle leave you stunned and stay imprinted in your memory forever. We walked from the castle to our hotel in the old town square just to enjoy the city and really get the essence of it in our souls before we left for the airport to catch our flight. I think the best way to experience a new city is to do it on foot.

If there’s one thing I can tell you about Prague, it is that you must go visit it. Even though the city is a popular tourist place in the warmer months of summer, around Christmas time, the beauty of Prague takes on a different tone. Strings of Christmas lights adorn every conceivable street, residents and tourists alike meander through Christmas market stalls enjoying mulled wine, hot chocolate and cappuccino with pretzels, churros and chimney cake hunting for the prettiest mugs to take home. Everything is slightly tinted in purple and blue, with warm lights reminding you every moment that it’s the most wonderful time of the year.

If you’re visiting Prague during Christmas time, you’re likely to end up in the Christmas markets every evening like my friend and I. Regardless of how tired we would be after walking twenty thousand steps on the cobbled streets, we would come to the hotel to freshen up and walk to the Christmas markets to end the day. Visiting Prague in the winter is a daring decision because the temperatures can fall really low but Prague in Christmas is easily one of most stunning sights your eyes will ever see.