An American cowboy driving a heavily decorated three-wheeler across Pakistan… a bit hard to imagine. But that’s exactly what Alexander Volberding is about to do 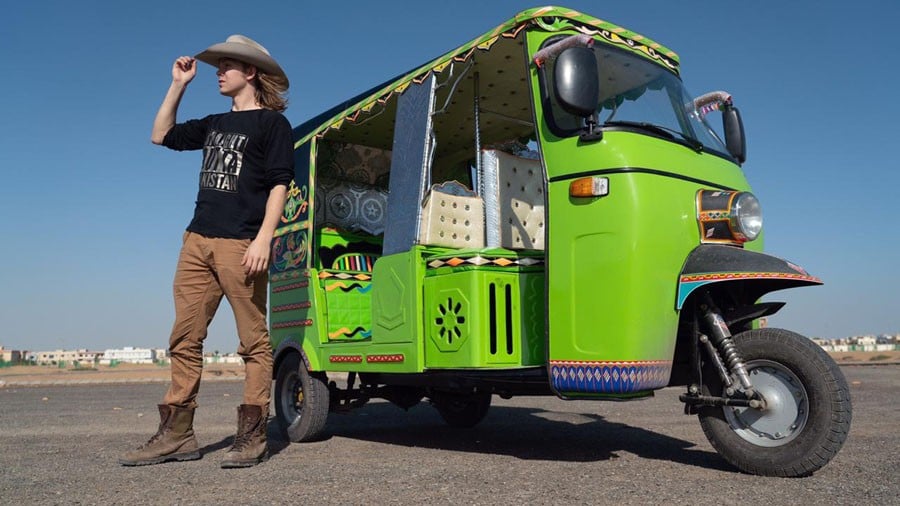 Alexander Volberding, who originally belongs to Texas, USA, is better known by his online name, ‘College Free’. He chose the name for his Youtube channel, since he does not hold a college degree and believes, "a degree is not essential to be successful in life". He encourages others to try to learn from other people and their experiences, and "by travelling the world".

He is about to embark on what seems like an impossible six-month-long journey on his newly-bought three-wheel drive. He hopes to tell the stories of Pakistan and its people through visual media, by driving a rickshaw all the way from Karachi to Khunjerab Pass, while meeting people on the way and asking them for their recommendations on which location to visit. En route, he is hoping to invite Prime Minister Imran Khan for tea to discuss how tourism can be improved for foreigners visiting Pakistan.

This is not the first time he has embarked on such a journey far from his home. Two years ago, Volberding left his hometown with just a backpack and a vlogging camera, with the intention to hitchhike across the US, "to disprove the myth that all hitchhikers are unsafe and possibly murderers, or more simply, to try to break stereotypes people have about strangers in general".

He hitchhiked across the US, from Maryland on the East Coast to San Francisco on the West Coast on a $5 per day budget in 77 days -- a trip which would have otherwise taken 66 hours by car. The purpose, he says, was to prove "the kindness of strangers". He interviewed people who offered him rides on what success meant to them. "Almost everyone replied that it meant happiness," which essentially proved his theory that to be successful one does not need a college degree, "as success is relative".

Volberding started learning multiple languages at a young age. He had a personal goal to learn the four most-spoken languages in the world before the age of 25, so that he could communicate with a majority of people during his travels. He learnt Spanish by going to Mexico every summer as a child, Chinese by spending five years in China, and Urdu and Hindi from a language school in the US. It was there that he made friends with some Pakistanis who started telling him about how their home country is wrongly represented by western media.

He wishes to drive his rickshaw across Pakistan against all odds, like the vehicle breaking down or him getting lost - to prove a point to the world that Pakistan is presented in a unidimensional manner in the west. "If I can travel across Pakistan in a vehicle that constantly breaks down and doesn’t go over 50km/h and stands out with its crazy lighting and decoration… if I can do that as an American in a cowboy hat, then that’s gotta say something, right?"

His concept of going ‘College Free’ also comes into this, as there is a tonne to be learned from everybody around us, but "we just focus on the traditional higher education in colleges and universities".

Alexander Volberding plans to travel in his rickshaw on his own. He also plans to sleep on the backseat of his three-wheeler. He wants to see the Pakistan where app-operated taxi services do not work, "in a vehicle which may not withstand the journey and may break down numerous times on the way to my final destination, that is if I ever manage to reach the Khunjerab Pass".

The reason he has chosen the unconventional way to travel is because he wants to attract attention. "People are less likely to approach me in a car as it is a physically closed structure. I am hoping more people will come up to question me about my journey".

Volberding will be recording his experiences in the form of weekly vlogs for his Youtube channel and one minute vlogs for Instagram. To avert any risks, he is trying to learn to fix the rickshaw. It seems he is almost hoping for something to go wrong with the rickshaw to create more interesting content for his vlogs.

If he manages to complete his journey successfully without any major incident, he will be another addition to the recent spate of foreigners who have set out to humanize Pakistan for western audiences.