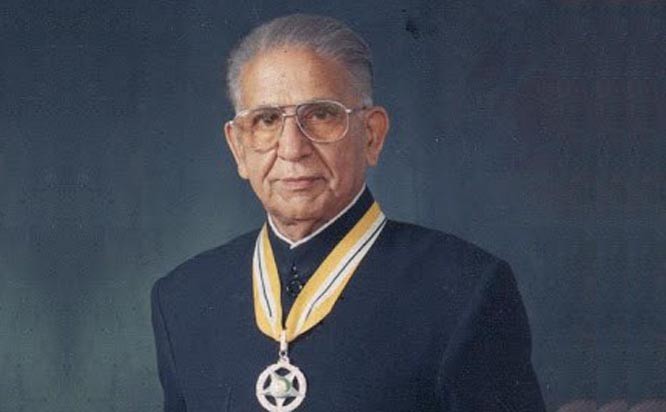 The cramped auditorium of Lawrence Gardens’ open-air theatre is perched on a hilltop, circled by dark, barren tree branches. The melodious notes of raga Todi resonate from every nook of the room. It is pitch-dark inside except for the light illuminating the semi-circle of the stage. Chairs are arranged in rows to the left and right of the arena, creating an easy walkway in the centre.

As I seat myself in the back row I see a compactly built old man standing near the stage. Holding a microphone in his hand, he’s calling out names of the participants for the student auditions for the All Pakistan Music Conference. Gracefully dressed in a black suit, and arms folded, he observes every precise detail. He seems not too pleased by a young boy’s performance. Turning towards the participants, he says, "whosoever sings with their eyes closed will be disqualified. One must look at the audience when they’re performing." A current of nervous energy passes around the room as everyone looks at the stage, waiting for their turn with bated breath. My name is finally called out. He confirms my name in the light-classical category and, speaking in a clear loud voice that commands attention, utters: "if you perform an acclaimed singer’s piece, bear in mind there would be a comparison."

I remember the startled exchange of glances with my music teacher following this comment. It was year 2000.

I noticed a faint smile in Dr Ghazala Irfan’s eyes as I narrated my first meeting with her father, Hayat Ahmad Khan. We were at her residence located on a cul-de-sac off Gulberg’s Main Boulevard, Lahore. The living room was resplendent with tinsel furniture, stacks of old books, paintings on the walls, sculptures, glittering chandeliers, and antique, half-forgotten items that gave the room an air of nostalgia. Being a regular attendee of the All Pakistan Music Conference (APMC), I have known Dr Ghazala for the past many years. However, this was my first one-on-one conversation with her.

She showed me a few booklets published by the APMC that feature a compilation of photographs and articles written about Hayat Ahmad Khan. Ruffling through one, we came across a photograph of Hayat Ahmad Khan, his wife and daughters with Ustad Bade Ghulam Ali Khan at a baithak in Lahore. Hindustani classical music suffered an irreparable loss during the partition of India. After the migration of renowned classical musicians to Pakistan, lack of patrons in the newly established country resulted in the impoverishment of the rich classical music traditions. Khan’s favourite Calcutta-born Roshan Ara Begum of Kirana gharana also moved to Pakistan in 1948 with her husband who hailed from Lala Musa. "Hayat Ahmad Khan was quite fond of her renditions of ragas Darbari and Adana," tells Ghazala. Quoting her father, she said: "Roshan Ara Begum didn’t have an attractive face but she was the most beautiful woman in the world when she sang."

In 1959, Khan was deeply disturbed when he read in the newspaper that Roshan Ara Begum had announced that she would give up singing. He went to Lala Musa with a friend to request her to reconsider her decision. On their return, they sat down at a café and decided to establish a platform for the preservation and propagation of classical music in Pakistan. Hence, APMC was set up with twenty-five thousand rupees in its bank account. The first conference took place from Feb 19-23 in 1960, spread over a week and attracting music aficionados from across the country. The first conference was successful; the open-air theatre was brimming with people. Those who couldn’t find seats had climbed the trees to listen to mellifluous performances by some legendary vocalists of the Indian subcontinent.

"I still remember the first conference. Three of my younger sisters and I were asked to distribute brochures among the audiences. We sat there all night, listening to the performances. We didn’t realise the impact it would have on us," she recalls.

Both their parents lived near the Wazir Khan Mosque. They were neighbours and got married after a brief period of courtship. Hence, the baraat that departed from Hayat Ahmad Khan’s home traversed through the narrow alleys of the old city and came back to the same street again.

After graduating from Punjab University in 1942, Khan joined his father’s import and export business. Their mansion near the Wazir Khan Mosque was in close proximity to some well-known classical music baithaks in the old city, which were eagerly frequented by Hayat Ahmad Khan. He gradually became deeply engrossed in the local music scene of Lahore and would usually resort to Mr Afzal’s baithak where Mohammad Rafi also used to practice his music pre-partition.

His growing interest in music often invoked his parents’ disapproval. Having lost two of her elder sons while they were still infants, Khan’s mother worries for him frantically when he was born in 1921. Hence, he was named Hayat meaning life. It was decided that the oldest living person in their neighbourhood would give him gurti (the tradition of giving first sweet to a new born). The oldest living person happened to be a mirasi, a community of traditional musicians in the subcontinent. Whenever Hayat was rebuked for being obsessed with music, he would remind his family of being given a gurti by a mirsai. "What else do you expect?" he would retort.

Sharing some memories from their residence at Davis Road, Lahore, where they moved after partition, Ghazala recounted Rasoolan Bai’s stay with them when the leading Indian vocalist from Banaras gharana was invited for a performance at the APMC.

Hayat Ahmad Khan worked ceaselessly to promote Hindustani classical music in Pakistan. In recognition of his valuable contributions to music, the government of Pakistan conferred him with the Sitara-e Imtiaz. Besides being a promoter of music, he was also a keen listener, but I wanted to know if he was also a practitioner of classical music. Dr Ghazala informed me he had learnt to play the tabla. He didn’t perform but would give lecture demonstrations. She drew my attention to an article published in the APMC booklet, written by Moni Mohsin that mentions two of Hayat Ahmad Khan’s mentors, Ustad Qadir Baksh Pakhavaji and Ustad Sardar Khan of the Delhi gharana. Ustad Allah Rakha was one of the disciples of Ustad Qadir Baksh. He would often send letters to his mentor while he was travelling. Dictated by the ustad, Hayat Ahmad Khan penned most of the responses to these letters and admitted learning more about tabla through this exchange of letters than he could have at any academy of music.

In a country where classical musicians are forced to leave their inherited art to take up other professions for socio-economic reasons and to overcome the shame associated with music, Hayat Ahmad Khan’s family continues to serve the cause of promoting and preserving the ancient art form and its proponents.