Between love and violence

Love and death appear closely entwined in the art of Quddus Mirza in his solo show at Canvas Gallery, Karachi 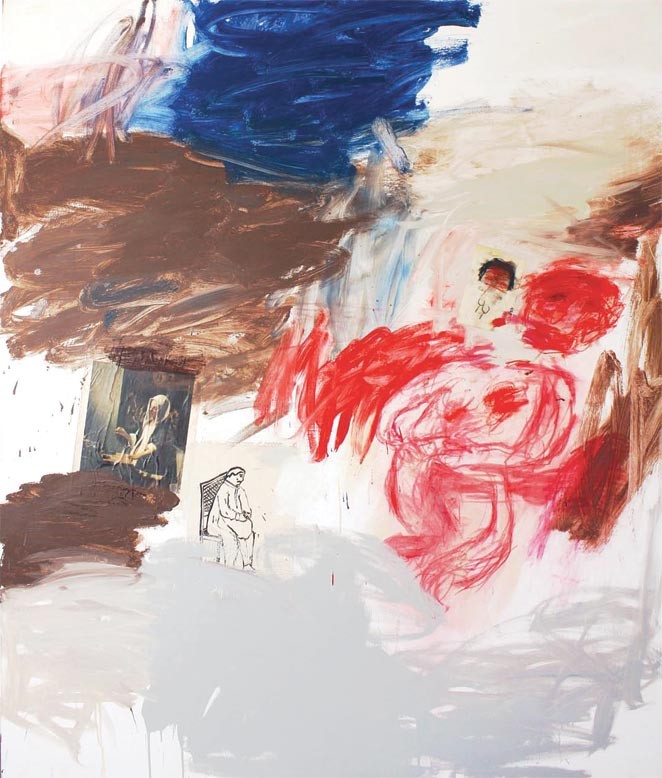 The human mind is capable of creating millions of emotional responses to given stimuli in its surroundings, and while all these emotions may feel distinct, many are not all that different. Love and violence, passion and aggression; they may sound like polar opposites but can oft times emerge from the same space, to the point of eliciting similar physical responses from the body; racing heartbeat, dilated pupils, breathlessness, a rush of adrenaline. There is a reason why there is such a thing as ‘crime of passion’; extreme surge of emotions can lead to unchecked aggression, and crossing the line from love to violence is not that much of a leap for most.

That is perhaps why love and death appear so closely entwined in art and literature (Romeo and Juliet, anyone?), most recently in the works of Quddus Mirza at Canvas Gallery Karachi (Jan 29-Feb 7, 2019). The two have held his fascination for quite some time and have been an underlying aspect in his past works as well. Here he addresses the two more overtly, yet also through certain subtleties of colour and style, packaged within various narratives. Through the treatment of both in violent splashes of red the artist points to their similar nature, blurring the lines between them and creating a sense of confusion; one cannot always tell by looking at a painting whether it is death one is witnessing, or love.

All of this the artist achieves masterfully through his signature painting style, which is at once minimalist and saturated with imagery, colour and layered meaning. The childlike drawings sit among spaces of aggressive colour and unrestrained mark making, creating a sense of reckless abandon that harkens to the untethered expressiveness of childhood. Much like a child’s drawing, the artist does not believe in covering each corner of the canvas with paint before giving it the gallery wall, adding to the rawness of each work. In the context of the current works, this rawness becomes reminiscent of primal instincts, of unadulterated and unbound emotions free of complex rational thought. There is an honesty, a spontaneity in Mirza’s works, as he begins each work with barely a sense of what might be the end result.

Yet, his style has developed after years of practice and study. Having mastered formal drawing at NCA, he realised in essence it is not much different from a child’s drawing which is as successful in conveying its message. Yet, it is the childish scrawl that is more interesting, more attractive and more expressive, free of pretense, cultural baggage or academic conditioning; it represents the individual in its truest form. It appears simpler yet becomes even more difficult to achieve in adulthood; the unlearning and shedding of preconceived notions of art. In this way, Mirza’s works become one of those that challenge our perceptions of painting as a traditional medium, gracefully inserting it into the contemporary discourse.

Each work in this series is a world within itself. Yet, the artist doesn’t aim to weave a cohesive narrative that runs through the works, but rather presents a kind of collage -- of disjointed thoughts within one canvas that centre around an idea. He creates little pockets of ideas, spaces within spaces, smaller images beside larger ones, some in the form of pasted found images, others painted with the ambiguity of semi abstraction, with the audience left to draw connections and derive meaning. Love and death thus becomes a loose theme that drives the artist’s interests, yet not a strict rule followed in each work.

In ‘How to be Alone’ for example, the two seated figures of a man and a woman appear to be cradling fatal wounds, bleeding out all over the canvas. The image appears violent and there seems to be a look of horror on the woman’s face. Yet the placement of the red on the body appears questionable, and is enough to create doubt in the mind of the observer, and the posture of the male figure along with articles of his clothing lying around create further ambiguity that is enhanced by the title of the painting itself. Is it perhaps more of a sexual awakening we are witnessing, a primordial passion taking form?

There is an honesty, a spontaneity in Mirza’s works, as he begins each work with barely a sense of what might be the end result. Yet, his style has developed after years of practice and study.

On the other hand, ‘B 4 Blood’ and ‘Death and the Maiden’ become a bit political in their reference to 9/11. The former directly shows the twin towers being approached by a plane, black smoke billowing from the buildings and the scene rendered in dismal deep purple and a field of red down below. The latter again shows a plane, this time approaching a man who appears to be a decapitated corpse, next to whom sits a woman. Mirza sees airplanes as a classic combination of love and fear of death, as one flies to one’s destination with excitement, but also nestles an underlying fear of crashing and dying at the back of the head. This idea is perhaps what emerges from this work, reinforced by the image of a map marking out impacted areas, as well as the title which is taken from a play by a Chilean playwright Ariel Dorfman, which centres on sexual violence and the ambiguity between guilt and paranoia.

‘Different Dimensions of a Line’, on the other hand, takes on a self-referential tone and comments on the act of art making and self-expression. The artist juxtaposes four different styles of painting from different sources; Vermeer’s ‘Woman Holding a Balance’, a drawing by one of his students at NCA, a drawing by a child from a school he taught at, and one of his own childlike renderings. These four different approaches to the figure bring out personal nuances and the importance of individual perspective in art, allowing us to look and compare artists at different stages of their development, set against a Western historical canon to highlight the contrast and make us question the virtues of skill.

As the artist talks about raw emotions and presents them with a rather visceral, instinctual flare, the boundless freedom of his own style becomes as much a part of his narrative as the imagery and colour itself. "There is a certain freedom in this kind of mark making. No restrictions, no boundaries. I have reached a point where there is no pressure and I can create what I want to create," he says. It takes one to a place where love and aggression, passion and violence, all blur into similar entities emerging from the same untethered primal space.

Between love and violence