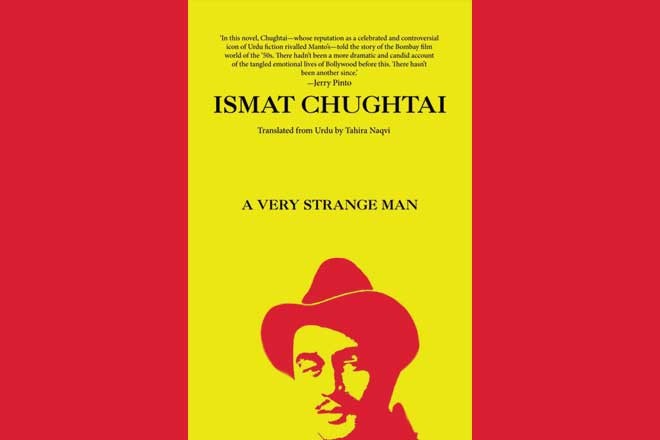 The film world of Bombay in the fifties had one thing in common with the progressive writers’ movement. Many were connected to both, including the fierce Saadat Hasan Manto, presently the subject of a Nandita Das film as well as the feminist Ismat Chughtai herself. Though some of those writers wrote for films then, as the book tells us in the introduction, to earn a buck, they managed to inject their philosophical beliefs.

Translated from Urdu by Tahira Naqvi, A Very Strange Man is, therefore, not a pedantic sketch of the Bombay film world of the time but is very much a work about a time that no longer exists. Ismat Chughtai has changed some names here and there, but having had personal experience in the film world, Chughtai not only blows open the lid of how things operated then but does so in fantastic prose.

A Very Strange Man is also, in essence, a fictional narrative believed to be based on the tragic life and death of Guru Dutt. However, the story is told not through his name but is about a character called Dharam Dev.

It is a critique and analysis; it also tells us about the trend of how films were made back then and ironically enough, have returned to the same form.

Dharam Dev, goes the book, made the film Baazi and with it took the film world by storm. Noted Chughtai about the film and how it changed industry norms: "Cabaret was not so common in Bombay at the time; Dharam Dev presented a western style dance performed by a beautiful dancer in such a way that it became an essential part of every film that followed."

She added: "Soon, western style villains, or crooks engaged in smuggling or some other disreputable trade also became part of every new film that came along."

Ismat Chughtai does take some names. She recalls how in 1946, "Ashok Kumar and Sevak Waccha breathed new life into Bombay Talkies" [ a film studio founded in 1934] and the environment was akin to an academic institution. Past actors were forgotten. "Most of today’s renowned actors could be seen entering the Bombay Talkies compound only with the help of introduction."

A film that cost upward of 50 lakhs could be made in a much smaller amount with new actors. Unlike now when nepotism is thriving in Hindi films, back then producers and directors considered it humiliating to push on their progeny in films.

Noted Chughtai at one point: "Dilip Kumar, Raj Kapoor and Dev Anand, on the other hand, became famous only after working in God knows how many films."

The book reveals that the Madras film world also held an incredible role at the time, by elevating actors and hijacking them the moment a new star was born.

And, like always, as something changed, some things remained the same. For instance, at one time the hero of a film would also be its producers "and make films with his own profits in mind…" while all others languished depending on the generosity of others.

There was a compound where these young actors languished, waiting for a moment when their time would come or gossiping amongst each other, under a sprawling Tamarind tree. Love was the chief subject of films. And it was a period when "Geeta Bali was acting in a minor role in a film called Girls’ School; Lata [Mangeshkar]’s voice was being put through trials and two songs in Geeta Dutt’s voice had already been recorded for the film."

They were the days of Shamshad Begum while singers like Mohammad Rafi and Mukesh were relative unknowns.

As for Dharam Dev, he would fall in love all the time and the love for one would go to another and another. "Often, it so happened that he would be smitten by Geeta Bali in the morning, and by nightfall, when it was time to leave, his thoughts would be fixated on Madhubala."

Even as Dharam Dev remained infatuated by one woman or another, he would return to Mangala, who entered filmdom as a singer and hated acting. Throughout the book, Mangala remains a central point to whom Dharam Dev, the filmmaker with the Midas touch, made a promise to marry. When he didn’t follow through, she made a suicide attempt and soon after they were married.

After the war, the number of films made should have increased but because distributors didn’t want to make huge investments in studios, they took the shortcut and a new practice was born. Rights for films were sold in instalments and ergo, films were also made in instalments. It initiated a race where everyone wanted to become a producer and it led to a scenario where soon there were more producers than studios. "The shortage of studios was offset by shooting outdoors."

These were times when each actor was busy working in 20 films at a time! But once enough money was made and taxed, the "fashion of black money began."

Dharam Dev was relatively unknown at the time when he made Baazi and Mangala was getting rough treatment from her family for not trapping the man. "But this was the film world, no one was your friend here. Your best friend was opportunity."

A scathing but real observation, Chughtai writes about the changing film world as well as the relationships that made and broke Dharam Dev. To learn about his instant likeness for Zarina Patel that eventually led to an unhappy marital life with Mangala, read this book. It is not only an inside look into the film world or Dharam Dev, loosely based on Guru Dutt, but how some views change and some never do, including the belief that an actress needs not acting skills but good looks and a body "that could be moulded to good effect in a film."

It is something done in Hindi cinema even today and is also a major question mark for Pakistani cinema in the making.