Singapore on a budget 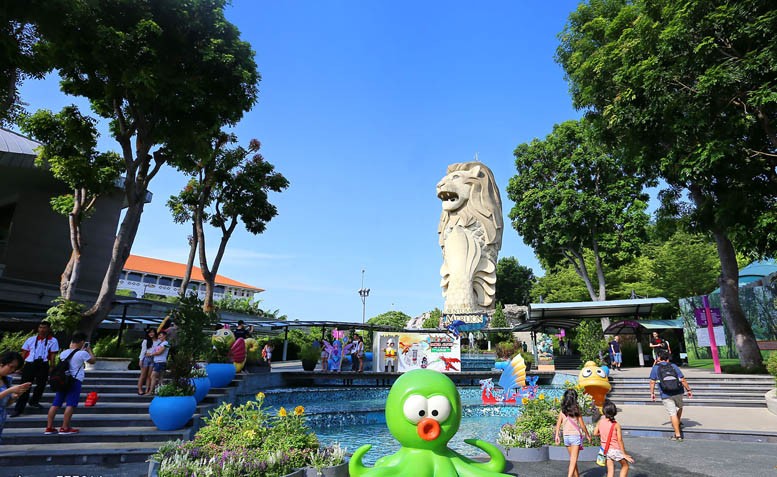 For most people, travelling means packing a big suitcase and keeping a large budget in mind to splurge on the vacation. For others, backpacking with a limited number of belongings and low budget is the way to go.

So, when I planned my four-day trip to Singapore, I packed a few t-shirts, toiletries and an extra pair of jeans into a backpack -- and I was ready to go, willing to compromise on a few everyday luxuries.

I soon booked the cheapest airline ticket I could find, and with a family member, was on my way to the city that calls itself ‘The Lion City’.

As soon as we left the Singapore Changi International Airport, we were hit with a blast of hot, humid air. We grabbed a cab, and ask the driver to drop us off at an apartment building near Clarke Quay, the hub for nightlife activity near Singapore.

The building hosted a different youth hostel on every floor. As we went up the stairs of the apartment building, we were able to look in through the glass doors of all the different hostels. While some seemed very high-end, others were shabby, and one was even Indian themed, with a statue of the Hindu god Hanuman, displayed at the entrance.

When we finally reached the appropriate floor, we took off our shoes and placed them on an already cluttered shoe rack. The youth hostel which we had booked was a cheaper option than staying at hotels. Decked with IKEA furniture, the space had a warm and homely environment. A common lounge where other backpackers sat and discussed travel plans, an open kitchen with no stove and shared communal bathrooms was to be our home for the next four days. The rooms, like the rest of the space, were also shared, with bunk beds along the walls. As the whole space was too small for the number of people hosted, the sinks were placed outside the bathrooms, in front of the lounge, so that every morning we would have to brush our teeth in the open -- privacy not being much of an option.

Other than mingling with other like-minded travellers, another plus point of staying at the hostel was the discounted tickets of attractions around the city that we were able to get from the premises.

Singapore is a concrete island. Very developed but not as inviting as your average tropical island. Colossal skyscrapers frame the horizon and fast-paced, high-end cars crowd the traffic. A lot of locals cannot speak in English or pretend not to -- a bit surprising considering Singapore’s position as the leading publisher of English language teaching books.

One of the biggest tourist attractions is Sentosa Island. The island can be reached in two ways, either through cable car or Metro. The cable car travel is quite an experience as one gets an aerial view of the tiny island when approaching it from the mainland of the country.

Sentosa is laden with different attractions and is not very big. I personally came to this conclusion when I realised that I was late for a show which was being held on the other end of the island. Having only a few minutes till the show started, and not willing to miss out any of it, I ran the course from one end of the island to the other. On reaching the destination and only five minutes late for the show, I looked at the time, panting, and realised that it had taken me a total of 15 minutes of running time to reach the show. I guess it’s also worth mentioning that I’m not a very fast runner.

The island includes many attractions such as Universal Studios, Madame Tussauds, an aquarium and different shows amongst a diverse list of other activities directed towards tourists. The big Merlion, which is one of the country’s landmarks, also stands as a 12-storey-high structure on the edge of the island.

It’s an absolute ordeal to find halal food in the country where it comes to hawker food. Most of them don’t even know what the word halal means. So for the four days I spent in the country, I survived on French fries and ramen noodles.

After visiting the Singapore Flyer, from where an aerial view can be seen of the whole city including skyscrapers and Gardens by the Bay, we rushed to the Singapore Zoo, only to find out that it was closing in half an hour. Being an avid animal lover and persistent not to miss one of Singapore’s greatest attractions, I applaud myself for the way I covered the attraction. I would run to one animal exhibit, stand there for a few minutes to admire the animal, and then run to the next exhibit. It’s easy to say that I ran a lot in my visit to the country.

In my brief moments of observing each animal, I noticed that there was no cage separating the observer from the animal. Instead a very strong glass separated the two, to make it easy to observe the animal.

Singapore Zoo has a lot of attention to detail. The golf carts have animal patterns, while the bathrooms are designed in a manner that one feels they are in the middle of a jungle with grass and trees all around. There is a lot of emphasis on educating visitors about the animals and the risks they face in their natural habitat in form of information printed all over the zoo. A lady also stood in a safari suit, behind a table, where she had laid out different skins of a lion, a tiger and a cheetah, and other big cats. She would encourage people to touch the skins while educating them about the animals.

Right opposite the zoo is the night safari. The nighttime reserve consists of winding trails which one can explore in their own pace. As we walked around, the animals were just a few feet in front of us with no barriers, the only thing separating us was a deep ditch which can be still quite scary. I recall standing in front of a large hyena, with not much between the wild animal and me.

While backpacking is not the easiest thing, it definitely enables one to spend more on certain areas of travel and cut out some costs that can be deemed as unnecessary.

While I was not able to see all of Singapore, I definitely was able to do a lot within a limited budget.

Singapore on a budget