Tales of endless love and war 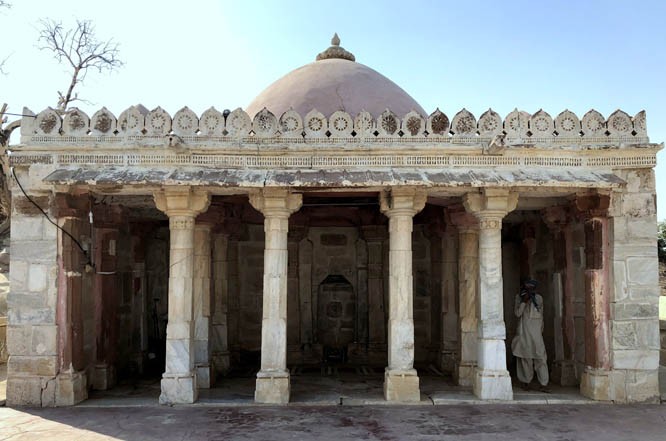 The two-hour or so long road journey between Islamkot and Nagarparkar (some 79km) is like seeing Tharparkar through a kaleidoscope. The rolling light brown sand dunes with a sprinkling of green are replaced by flat land with hills forming the perfect backdrop. Every now and then you see a cluster of thatched-roof chaunras (huts), a lone camel or two reaching out to munch on the leaves from the thorny kandi tree. Try as you may, you barely see the famed Thari cows with their majestic horns as most have migrated to the barrage area in search of water. Refreshingly, there is hardly any plastic clinging to bushes or half buried in sand, which has now become a bane and hallmark of most highways in Sindh.

The virgin frontier land of Nagarparkar, located at the southern limit of the vast Thar desert, on the northern edge of Rann of Kutch, will soon be in the throes of a socio-economic and cultural transformation when coal excavation begins in that part of the region. Islamkot is already witnessing it. Hopefully there will be some good, even if there will be the not-so pleasing environmental and social changes.

The area is surrounded by the famous Karoonjhar mountain range. At close quarters, the hills (the highest point is 305 metres) look like blocks of giant sized pink (granite) boulders perched one on top of the other, rather precariously. A young boy, not more than 12 or 13, selling cold drinks at a roadside makeshift kiosk, boasted he has friends who can go up and down the mountains in less than eight minutes!

Dr Noor Ahmed Janjhi, who loves to trek up these mountains, refuses to believe him. "It can take up to a good two and a half hours, even if one was young and quite fit." Janjhi teaches language and literature at Mithi’s Government Degree College.

Never mind the time it takes; reaching the summit is well worth the energy spent. "The view of the Rann of Kutch below is spectacular!" he adds.

According to the educationist, the most mesmerising time to be in the mountains is sunrise and sunset. "The place is rich in vegetation, springs are plentiful as is the wildlife," Till six months back he saw vultures and last year he even chanced upon a nilgai (antelope). But the mountains are also favoured by the livestock who clamber up to graze.

Apparently, the area surrounding Nagarparkar was once covered by the Arabian Sea. It was a busy seaport, and the centre of Jain religion and culture, where wealthy Jains lived to trade and practice their religion. From the hills down to the small towns, there is a footprint of Jainism everywhere. The Jains may have left but their dheras (people mistakenly call them temples) can be found at Gori, Virawah, Bhodesar and Nagarparkar, most of them in a very sorry state.

Visiting their ruins transports one to another time. Of the five that are still in a better state, the one in the middle of Nagarpakar bazar (restoration work seems to be at a standstill there) is still breathtaking. It was built by a wealthy Jain trader to honour Lord Parshwanath, the 23rd Jain prophet, in the 16th century. It is disconcerting to see the defiled faces of deities painted on the walls.

A stifled but piercing shriek makes me look up. To my horror, the ancient dome has hundreds of petrified tiny black bats clinging on to their dear life.

"The last set of Jain families left soon after the 1971 war broke out between India-Pakistan," informs Janjhi. And before the partition, the community would consistently refuse the British offers for restoration of these holy sites, "stating that it was their responsibility to maintain them," he adds.

Happily exploring my way through the Gori dhera with its central dome containing a dozen or so small niches (Janjhi says these may well have been used as places for meditation), a stifled but piercing shriek makes me look up. To my horror, the ancient dome has hundreds of petrified tiny black bats clinging on to their dear life.

All kinds of scary (read witchcraft) thoughts cross my mind in that moment. What if all these dark beings who may have been there for centuries (who knows) decide to descend on me? I walked away quickly but not before noticing that strangely all are hanging in fairly organised concentric circles in between what must have once been intricately painted frescoes!

The tiny Bhodesar mosque, close to the Bhodesar reservoir that collects rainwater for irrigation purposes, with its marble structure, was built in the 16th century, and despite the rows of ja-e-namaz (prayer mat), seems to have been influenced by Jain architecture. Given the times we are living in, it was refreshing to see how the vibrant architecture has survived across religious differences. "It was built by Sultan Mahmood Shah and the date 1505 AD is still legible," informs Janjhi.

Nagarparkar has come on the radar. According to Dr Harjilal Bheel, a veterinarian by qualification, and who was my guide for the day, during or soon after the rainy season, people flock to this area. "There is so much to show. We need to promote ecotourism here," agrees Janjhi, who was engaged by the Sindh Endowment Fund along with Dr Badar Abro to carry out a survey of the dheras back in 2012.

In fact, the Thardeep Rural Development Programme has recently built five cottages in a Cultural Complex in Nagarparkar which offers neat, clean and comfortable lodging facility. "Noted Karachi-based architect, Arif Hasan, designed these cottages, and the walls are well insulated, the clay tiles on rooftops are the ones already in use in Tharparkar, the wood columns used have been carved with traditional motifs and solar energy is partially used to run the place," informs Nalechango Bajeer, administration and logistics officer at the complex.

As far as restoration and conservation work of dheras is concerned, Janjhi says: "There is a lack of knowledge on how to protect antiquities. There are no experts who can help with proper restoration of these places of worship and neither is there a business plan to help generate income or involve the community."

About two months back the Directorate of Antiquities and Archaeology requested the minorities department that had been doing restoration work on Gori temple to discontinue its work because of quality and compliance issues. "We asked them to submit their complete conservation plan as conservation of archeological sites cannot be carried out by civil engineers. In addition, they must use historical material to restore it to what it was, not as what it can be and to document the intervention at every step," Dr Abdul Fatah Shaikh, director of the Directorate of Antiquities and Archaeology based in Karachi, tells The News on Sunday.

"The work carried out to restore heritage sites requires knowledge of the history and a certain sensitivity; you cannot just give it to any thekedar (contractor)," agrees Ayaz Mahesar, a former UNESCO representative in Sindh and currently a technical consultant with the Culture Department. "We have the potential, in the form of archaeology students; what we don’t know is how to strategise," he adds.

Tales of endless love and war