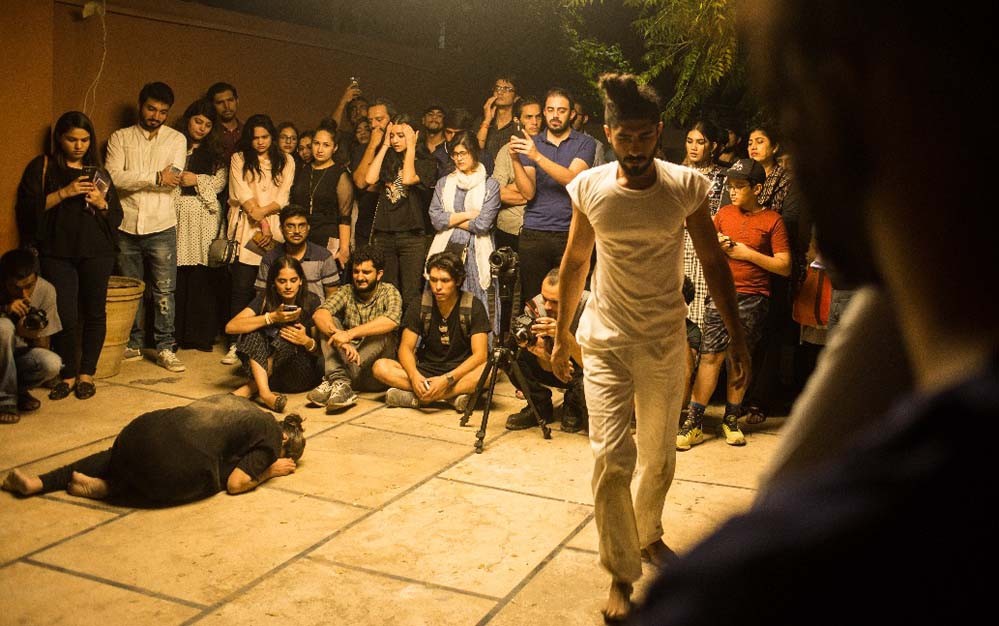 Performance is associated with life but the Performance Art recently seen in Lahore dealt with death. While the work of visual artists can also be viewed after their death, where the creator is part of a Performance Art, it can be only accessed in documentation.

The Performance Art in Lahore was conceived and created by young graduates and students of NCA. One presumes that the future is an unending fascination for life for the young people. But the works involving extinction of humans and other living beings is perhaps a reflection on violence that exists in multiple forms in our surroundings.

Curated by Natasha Jozi, and held on October 6, 2018 at Olo Junction, Lahore, Body Becoming was a unique series about life, society, media, material, body. The curator explains: "The event Body Becoming is an attempt to experience how the body performs both within and outside of itself" and "Performance is a relatively new way of conceptualising art".

Thus, in many works, a conventional conception of art -- aesthetics, skill and connection with history -- was deliberately avoided. Works that conveyed a different kind of vocabulary and weren’t much different from ritual ceremonies captured the audience. Even the best of friends were reprimanding each other for making a comment or conversation or a beep on the cell phone during a performance. Those present that night were attentive as well as in awe of whatever was happening around them. Jozi composed and constructed the entire exhibition as a combination of 10 performances of long and short durations. In some rooms, one could walk around the acts which continued for two hours, while the programme had indicated schedule of brief works, happening one after the other.

A few short performances were impressive not because of their urgency but due to the crispness of execution, unusual, serious and courageous concepts. This was evident in ‘Metaphor’ by Haider Shah. The surprise was not that three men started digging the soil with their shovels but, when after a hollow space was managed, the artist (air mask attached to his face) lay down in that pit, and two men resumed their job, pouring clay on his body, finally making a grave-like mound. The artist presented death, suffocation and claustrophobia but also referred to the frail link between the living and dead.

Besides its dramatic and shocking nature, the performance referred to issues of convention and culture. The distinction between the maker and the audience diminished when a woman became (without any plan of the artist or knowledge of the curator) a part of the performance, and contributed in digging the grave, trying to take the buried man out who was alive but had tasted a few moments of death.

The distinction between the maker and the audience diminished when a woman became (without any plan of the artist or knowledge of the curator) a part of the performance, and contributed in digging the grave, trying to take the buried man out who was alive but had tasted a few moments of death.

Kanwal Tariq has been addressing violence in her works for some time now. Be it a canvas with splattered blood of sacrificed chicken; birds bound in plastic bags; fish frozen to death in a water filled jar of slowly dropping mercury. At Olo Junction, ‘The Essence of What Fades’ appeared to be a culmination of all those creations. On a block of soft clay, she covered a girl wearing red (a resonance to brides and the institution of marriage) with mud, till the figure was almost hidden in the wet substance except her face and part of her shoulder. What seemed simple, picturesque and sensational was quite difficult to execute or perform in real. One cannot imagine oneself in the state of being under the earth or captures in a block of clay, even for an hour or less.

The seriousness of the subject somehow transcended any sentimentality if ever there was one. Both performances were direct, basic, and stripped of ‘arty’ embellishments. What was on offer was based on our experiences or information of our surroundings, where a stray police bullet can kill a child, women die in the name of honour, mass murders are daily reported. Even if a person is not physically annihilated, he/she is reduced to dust emotionally and psychologically.

Mental destructions of this kind were suggested by Nayyab Naveed in her performance, ‘Song to the Siren’. Starting with the burial of a ‘beautiful’ pigeon and then unearthing three other birds, the performance moved from these ‘cruel’ subversions to the artist’s reading of letters to her mother, which disclosed a young girl’s turmoil and trauma in various phases of her existence. It’s a society that has yet to recognise concepts of respect and independence when it comes to gender.

Maha Sohail, a recent graduate in painting from NCA, in ‘She Stood Like a Healing Drop of Sun Split on the Sky Floor’ punctured several plastic bags filled with clear water. She used a sharp tool to make holes at separate points, with water drenching her white dress. The last phase of her performance was hitting a sack following which turmeric started to drop on her body, staining it and making it yellow. The ingredient is supposed to have a curative power, hence the addition of ‘Healing Drop’ in a rather long title. But the work, due to its material and sequence, suggested the cycle of procreation and reproduction.

In the performance ‘I Love You’ by Waleed Sajid and Aisha Suria, a man in white and a woman wearing black moved in circles, tripping over each other, and stepping on one another in the course. Their movement, quick at first, turned tired and slow towards the end but, through this elementary act, the performance not only alluded to a bond between the two genders but to relationships of all sorts. The best aspect of the performance was not the clichéd content of male supremacy and woman’s subjugation, but the intricacy of interactions between human beings, where the shift of power is perpetual. The subtlety reminded of Roland Barthes: "Let us talk about it as though it existed".

The most important feature of these performances was the essence of physicality -- an extraordinary experience for an audience which is still new to a genre like ‘Performance Art’. While it was great to witness these strong works of art, it was disconcerting when clapping at the end of every work reduced it from Performance Art to mere performance, bringing reality to the level of imitating; converting ‘act’ into ‘acting’.