Remembering the days gone by 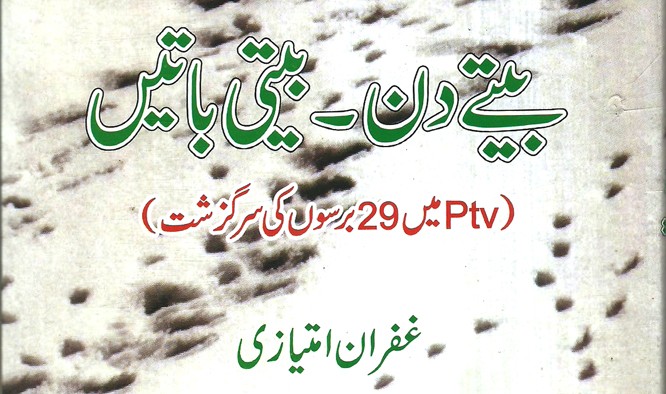 One wonders how to categorise this book of memoirs by Ghufran Imtiazi. Is it just a collection of bittesweet memories of the golden age of the Pakistan Television Network (PTV)? Or a portrait gallery of the pioneers of television, like Aslam Azhar, Agha Nasir and Fazal Kamal? Or just an album looking deep into the faces of the likes of Tahira Naqvi, Rafi Khawer, Moeen Akhtar, Khalida Riyasat, Azra Shirvani, Saleem Nasir, Nisar Qadri, Badiuzzaman and other tv stars of the past and present?

The narrator himself is a developing character in this story. He appears as a novice in the beginning, but as the story gains momentum, he finally emerges as a full-fledged professional, equipped with all tricks of the trade; at which point this book becomes a practical production manual for television producers. Imtiazi tells them where the programme ideas come from, how an idea is translated into a script, how the story-board for a tv play is prepared and, finally, how a multi-camera play production is handled.

Ghufran Imtiazi has been fortunate to have gained experience in all the three media: stage, film and television. He masterfully explains the difference between a live stage performance in front of the audience and a performance before the camera, imagining the scene is being watched by a hall full of cine-goers.

Most film theoreticians and historians give all credit of the present development in film art, to V.I. Pudovkin and Sergei Eisenstein -- the two Russian masters of early 20th century. Imtiazi goes a step further back and reminds us that years before the Russians developed their ‘montage theory’, an American named D.W. Griffith had already discovered the magic of film editing.

Griffith was the first film maker to use a big close-up, and while discussing the use of various shots artistically, he also distinguished between stage acting and film acting, he tells us.

Imtiazi also introduces the reader to Constantin Stanislavski and his method of acting. Stanislavski and his protégé Lee Strasberg gained a legendary status in the acting circles throughout the world, but Imtiazi has successfully demystified the ‘method’ by explaining it in the most simple words: whether it came through your conscious effort, or by Divine Inspiration, the method had always been there. All good actors ha used it unconsciously.

Ghufran Imtiazi has devoted one full chapter to explain what PTV culture exactly was. The founding fathers of PTV had a very vivid idea of this culture: "harmony, mutual trust and untiring collective effort to achieve the goal."

In this section of his book, Imtiazi’s approach is purely pedagogical: with all the vigour and enthusiasm of a school teacher, he addresses his readers and explains to them the mechanics of acting in six easy steps.

In 1982 while Ghufran Imtiazi was working at the PTV Headquarters Islamabad as the deputy controller programmes, he was transferred to Quetta as the new general manager of that station. Quetta station was considered a Kala Pani for the media personnel of radio and television. It was populated either by new employees or ‘rogue’ elements who were difficult to control at their home stations, and were sent to Quetta as a punishment. Since Imtiazi was neither a new employee nor a rebel, he was puzzled at this move. He later realised he had done the right thing by accepting the challenge, as this four year tenure at Quetta station emerged as the most valuable experience in his working life.

In Imtiazi’s tenure, Quetta station was shifted from its temporary abode to the new purpose-built structure. New equipment was installed and, most importantly, new programmes for children and new drama serials were started.

At the end of his four year stint, Imtiazi was given a Grade 9, the highest pay grade given to anyone in PTV. Quetta station under him was also upgraded from category B to A.

Ghufran Imtiazi has devoted one full chapter to explain what PTV culture exactly is/was. The founding fathers of PTV had a very vivid idea of this culture: "harmony, mutual trust and untiring collective effort to achieve the goal". That, in a nutshell, was the culture of PTV, and it remained so while it was a small organisation, where everybody knew everybody else. As the organisation expanded, the paper work and bureaucracy increased and the solid outcome, the production of quality programmes, dwindled.

"Right man for the right job" was a guiding principle in the early days of PTV. But when, under political pressure, wrong men sneaked in through back doors, the system started eroding.

The last 14 pages of the book are devoted to photographs, capturing important moments of the author’s life, from his childhood in British India to him shaking hands with various presidents of Pakistan. The inner flap is written by one of his colleagues Zia-ur-Rehman while the outer one is penned by poet and famous plawright Amjad Islam Amjad.

A couple of printing and proof-reading errors are the only bad spot on this otherwise well produced book.

Remembering the days gone by