Practising the art of Hygge

Cobbled streets and cafes in Gothenburg, and winding whimsical towers and Mermen in Copenhagen beckon the traveller to the quiet charms of Scandinavia 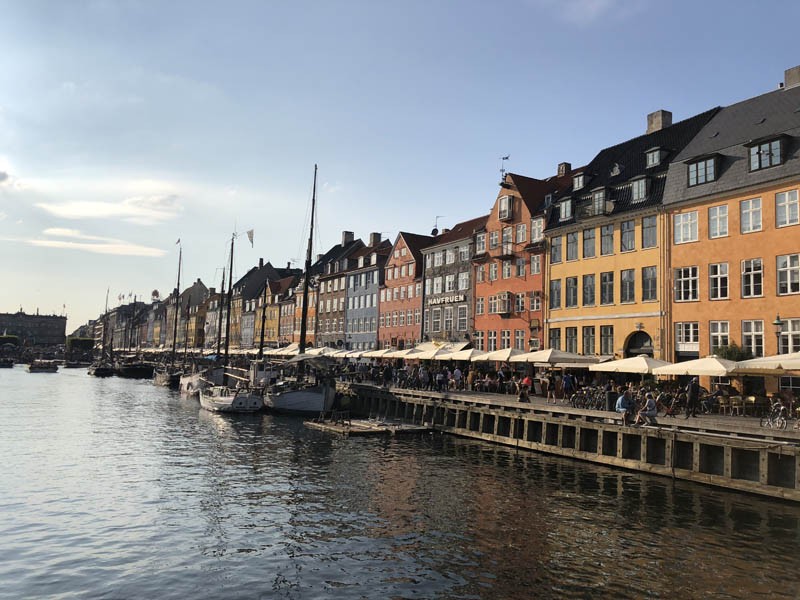 The plane readies for landing, flying low over the Swedish archipelago, over waters so still and clear that I can see our reflection on their surface. I squint as the rose gold evening sun sends shards of light, making it hard to see the square red houses sitting on the very edges of the land, surrounded by tall pines standing to attention like dark green soldiers. This almost flat landscape was not what I was expecting, I am taken aback, left to revaluate my vision of Sweden.

It turns out that the country is not all about crisp lakes, tall, blond Vikings (though I have never seen hair so pale a blond to be almost white) and IKEA, Sweden’s greatest exports. Though I feel slightly vindicated to see that Stockholm airport shares its design aesthetics with IKEA, with grey and green metal stairs and signs for utgang, easily recognisable thanks to countless trips to the store to mean exit. A train run on 100 per cent green energy (this is Sweden after all) takes us into the capital, where we have the first of many delicious meals of gravalax, knackebrod or crisp bread, pickled herring and meatballs with mashed potatoes, gravy, pickled cucumbers and lingonberry sauce.

Toto, we are not in IKEA anymore, I think.

Stockholm is an ancient city, tracing its roots to a Bronze Age settlement, yet it could be any city in Europe with wide boulevards and palaces that look like smaller versions of Versailles. Gamla Stan is the oldest part of Stockholm, with medieval cobbled streets, narrow, brightly coloured houses that lean ever so slightly as if they are so very tired, and a baroque palace home to Sweden’s current Queen. My 14-year-old throws a teenage strop and refuses to see the palace, insisting that we can see plenty of "those things" in England. He does allow us to take a ferry to the island of Djurgarden, steering us firmly past the ABBA museum, to the Vasa museum which preserves an almost intact 17th century warship.

The Vasa was the most powerfully armed warship in the world - for all of 20 minutes. According to legend the Swedish King ignored (as Kings are wont to do) the advice of his shipbuilders and insisted on adding 64 bronze cannons, making the ship so top heavy that 20 minutes into its maiden voyage and less than a mile from the dock, it started to sink to the bottom of the sea. As a small consolation, it bequeathed the term Vasa Syndrome to the business world, which is used to indicate problems in communication and management that cause projects to fail.

It turns out that the country is not all about crisp lakes, tall, blond Vikings and IKEA, Sweden’s greatest exports.

Our next stop is Gothenburg, a city of winding canals and leafy boulevards, with small cafes on almost every corner, perfect for people-watching while sipping on artisan iced lattes and nibbling on the famous Swedish bun or Kanelbullar. What is there not to like in a place that has a word especially for the act of drinking coffee and eating cake? I wonder, as I enjoy yet another fika, lulled by the heat and the clatter of shoes on cobbled streets and the hum of a dozen different languages.

The city is full of people from all over the world, here for the Gothia Cup, one of the largest youth football tournaments in the world. It is the reason why we are in Sweden too, as our younger son is part of the English under-12 contingent. We sit excitedly through the opening ceremony, an extravaganza of music and dance from all over the world, cheering till we are hoarse as the young teams march into the Ullevi stadium.

I can’t find my son in the crowd and wish that he too had worn something distinctive, like the Egyptians, who are dressed as Pharaohs with black and gold headdress and the Chinese, who carry a giant, red dragon over their heads. My son carries a small English flag, left over from the World Cup and on sale for 50 pence at our local store.

Much like the World Cup, our son’s team makes it to the top of their group and then gets beaten by another English team. Our sadness is tinged with slight relief, for we have been watching them play in 32C-degree heat, and this means that we are finally free to enjoy the city and its surrounding islands. So, we take a ferry to Varango, one of the furtherest inhabited islands in the southern Gothenburg archipelago, where the boys soon forget their heartbreak as they jump of a wooden pier into the refreshingly cold sea, shouting with excitement every time they spot another translucent jelly fish.

Onwards to Denmark, which according to the Happiness Index is one of the happiest countries in the world, where its citizens’ attitude towards life is embodied by the word Hygge, meaning to acknowledge and appreciate a feeling or a moment. And of course, life being what it is, that is when disaster strikes.

My husband’s laptop bag, along with our passports gets stolen somewhere between Sweden and Denmark.

Worried, we trudge up to the police station in Copenhagen and file a police report, where the kind officer tells me, "We might be the happiest country in the world, but we still have thieves."

I take a deep breath and practise my hygge and refrain from commenting.

Luckily, husband, whom I tease relentlessly for packing garbage bags and kitchen rolls in his backpack, has copies of all our documents including the boys’ birth certificates. Emergency passports sorted, we feel a renewed sense of hygge, so much so that a friend who sees a picture of us with our emergency passport photographs, comments, "For people who lost their passports, you guys look quite happy."

But it is hard to be gloomy in a city of fairy tales, home to Hans Christian Anderson and the Little Mermaid, which has the one of the oldest theme parks in the world, the Tivoli gardens, as well as the most famous restaurants in the world, Noma. It is a city where, to our kids delight, people swim in the clean harbour and where once a year, they jump off the flat roof of its opera house (height 40 metres) into said harbour.

Copenhagen’s horizon is a mixture of stark, modern and pragmatic buildings that manage to sit agreeably next to whimsical towers with winding staircases that curl around them like a vine, and spiky turrets that turn out to be three entwined dragons, aged to a tarnished green by the sea air. We take a segway tour around the Nyhavn canal, an old trading district and zip along cobbled streets, passing the Danish Library, also known as the black diamond thanks to its polished black windows, and the retractable, wonderfully named, "Kissing Bridge" that spans the city’s inner harbour.

On our last day, we stop at the Hojbro Bridge and find the submerged statues of Agnete and the Mermen, a Danish folktale about the part-fish family Agente left behind for a life on dry land. It is a story of love and loss told through an eerie piece of art, with the Mermen’s reaching arms made ghostly and insubstantial by greenish underwater lights. Unlike the statue of the Little Mermaid, the famous emblem of the city, this artwork is largely unknown to most tourists. Its discovery leaves us feeling special, as if we were in on the secret too, as if for a few days, we too were part of this magical city.

Practising the art of Hygge