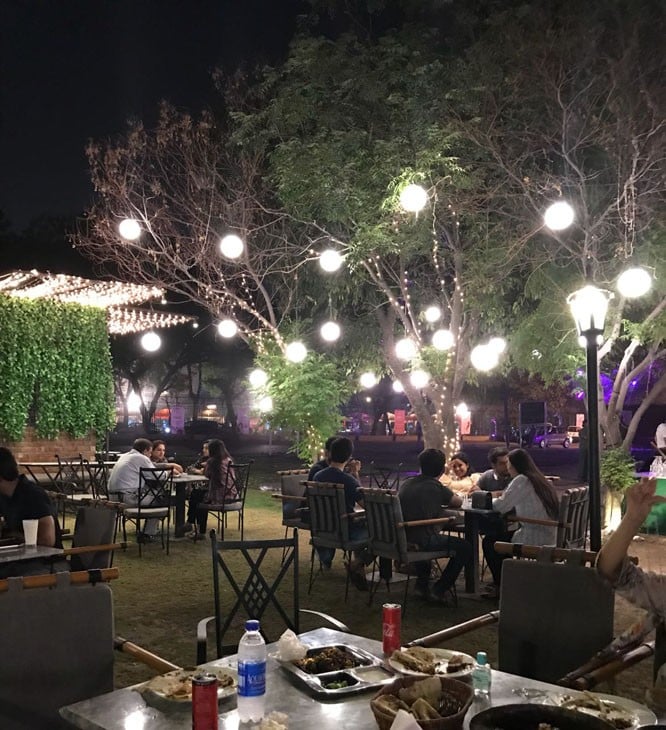 A well-lit, casual outdoor seating greets you as you enter the premises of this new eatery, interestingly named ‘Baranh’ (number 12), located amongst the cluster of desi food joints in Gaddafi Stadium.

It doesn’t take long before you realise that this has to do with the historic twelve gates of Lahore. Baranh makes no secret about the fact that it offers an "exotic" taste of the food specialties the Walled City is so well known for.

What struck me initially, on my first visit to the place, was an impressive lineup of chefs who had been got from the inner city and cooked live. This recreated the feel of the original which has been home to our ancestors. The rustic vibe of the place is simply not to be missed.

But why do people fall in love with the cuisine of the ‘androon shehr’? According to Muizuddin Farid, one of the two owners of Baranh, "An understanding of the city is very important for its inhabitants."

The old city, he argues, is becoming extinct, and the modern people are not even aware of what this could mean.

Staying faithful to its namesake, Baranh’s menu is about "twelve dishes best renowned for their taste in the interior Lahore. It is hoped that the place shall act as a bridge between the old and the new city."

I browsed through the menu after I was seated, and immediately sought help. "It is a general misconception that if we are offering tawa chicken or hareesa then we are trying to imitate the famous Arif Chatkhara [in Taxali] or Amritsari Hareesa [on Nisbat Road]," Farid explained, preempting a possible query. "We are only trying to bring the same taste to the urban city palette. What you order is prepared live before you."

The place has already introduced pathooras, tawa chicken, anda tikki and tawa qeema, to name a few. The rest shall be added in due course of time, I was told.

Before everything, gol gappa shots and pathooras arrived on my table as complementary items. Neatly placed containers with tamarind water and organic gol gappa shots could alone be your prime reason to visit the place. Served with boiled vegetables, organic yogurt, and sweet chutney, the divine combo worked suitably for a hygiene freak like me.

Every gate of the old city boasts its own specialty, but I am sure not many people have tasted heavenly dishes such as daas kulcha, prem kachori and shahi gosht. These, I found out, are prepared in desi makhan and ghee. Their signature lassi variety is also a must-try.

For paratha lovers there is laccha paratha and a host of other flavours -- mooli (raddish), aloo (potato), and qeema (minced meat). In the same way, the chaati lassi range is a revelation -- check out their makhan malai lassi and kesari lassi.

I ordered their much recommended mutton karrahi which, to my surprise, was the mildest dish in terms of spices. However, tawa chicken could have done well without so much green chili.

Baranh also offers desi murgha karrahi, aloo bhaji, and halwa puri but these are part of the breakfast menu. While I relished the qeema, cooked on a tawa (hot plate), and served with soft chappati, the aftertaste was just as great.

All in all, the place is about quality food and, thankfully, prices that are consistent with those you find in old city. Well, close. The halwa puri is for Rs60 per plate and tawa chicken is for Rs345.

The place is large enough to accommodate a hundred people. But there can be a delay of half an hour or more if it’s a full house. So, prior reservation is always a better idea.