Danish Ali, YouTube comedian, off-roading enthusiast, almost-doctor talks about his comedy career, which clients he didn’t enjoy working with, and laments why they aren’t paying the scriptwriter already 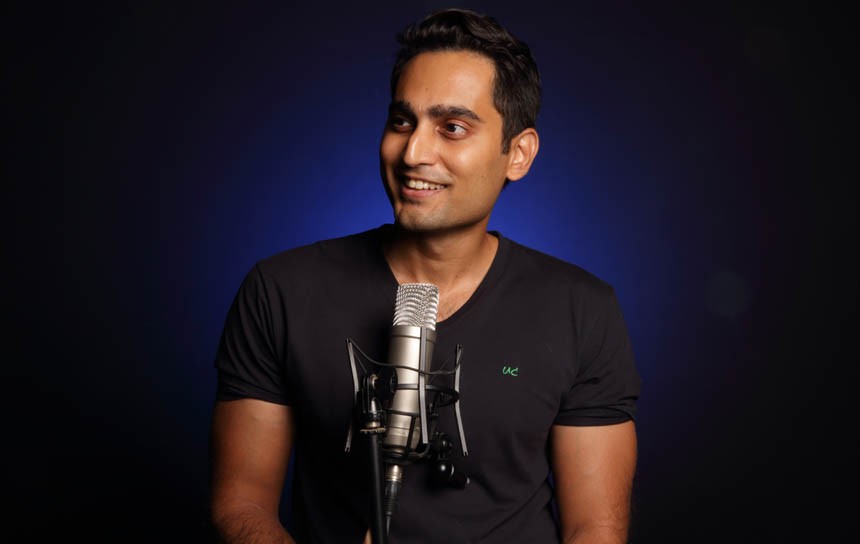 I knock gingerly on his door where there are cats lazing about. I call him up and he says he’s coming. I am expecting to see a white car of some model (don’t ask me why, he sounds like a white car kinda guy) and then he drives up in a large jeep. Maneuvering it through the tiny road, he parks it in his driveway and then jumps out in workout clothes.

Laden with bags of snacks and drinks, he leads me to his living room where camera lights from his previous shoot are still standing. So this is where the magic happens. In the pristine living room, with its upholstered sofas and decorative doodads, the lights look out of place, accidental. That is how Ali describes his foray into comedy - an accident.

"I had a vision of myself, from the ages of 13 to 18, that I will one day be a successful neurosurgeon. My first day at medical college, I realized that nope, that’s not happening. At the time I was watching shows like Who’s Line Is it Anyway.

"My first show was at Civil Junction, Islamabad, sort of like a T2F for struggling artists. There were 30 people in the audience and I had a joke about Commander Safeguard.  And they all laughed out loud. This was in 2004 and I knew then that this is what I wanted to do."

Ali’s YouTube videos have generated views in the hundreds of thousands. "The Chechora", a video sponsored by Chili Milli has generated 800k views and the numbers keep going up. His process sounds glamorous but is not. "You sit in your office, which in my case could be the sofa or the pool, and you think and you think and you think, and you might come up with one joke that is funny, it is not always an epiphany."

How does he know that something will work? It is when his wife doesn’t laugh. "I show my videos to my family. My sister laughs at everything, my wife laughs at nothing. But when she does, I know it’s bad."

For a YouTube comedian, Ali has racked up an impressive client list, working with the likes of Nestle ("Those guys were awesome") to Kurkure ("Always a pleasure"). "Last year all of my videos were sponsored," he says, looking a little sheepish. "This year I am trying to balance both. It is always fun walking into these meetings knowing that you are the guy who knows how to make viral videos."

The reason digital works, he says, is because it is so open. "They can pay me much less than the cost of a TVC and have concrete evidence of how many likes, shares and organic engagement my videos got."

To make his videos he works with small teams for various projects. By his own admission he is a terrible teacher but they all leave under his wing learning something. He attributes his success to Saad Haroon, of Black Fish. "I owe my career to him," he says. There’s a beat and then "So if I fail, I’ll blame him too." He finishes, laughing, his boyish face lighting up.

In Pakistan, where digital media is at a point "where it is just about to take over TV," Ali is grateful to the team of YouTube Pakistan. "They know all the content creators and are always asking if we need anything. With other social media platforms you don’t have that kind of care but YouTube Pakistan has done very well in the first year.

Ali’s next plan is to go into movies. He is just waiting for the right script. "And if that doesn’t come along, I’ll write it myself." He is very passionate about paying the scriptwriter well and hopes the Pakistani film industry will stop having the "sethiya" mindset it has always had. "You can pay 10 scriptwriters in the amount it takes to do a speedboat shot in Thailand!" he says. "It is sad that the script writer ki koi ahmiyat hi nahin hai. I have pulled out of projects because I have said that I will tear the script to shreds and start afresh."

He does have a cameo role in an upcoming Pakistani film for which he is excited because "I have the last line of dialogue." His future plans are to "do more of the same and try to out a video every day to reach that superstar status."

He advises up and coming comedians that try to "Be original, it is obvious when you have written a script in two minutes in a bathroom, not that there is anything wrong with writing in the bathroom," he quickly adds.

As the interview comes to a close, he comments on his by-the-way life plans, "If it were up to me I would be off-roading in Australia and living as a farmhand." For now, he is writing jokes and off-roading a different career path in this burgeoning age of digital media.